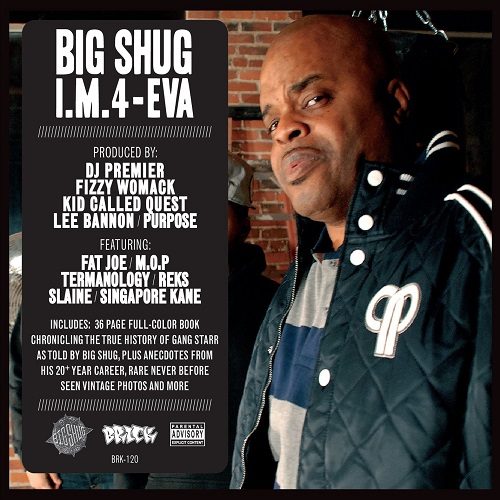 Rap is an innately collaborative genre – even the most mundane “solo” material necessitates the contributions of countless producers and studio technicians – and hip hop history is fraught with the sagas of crews of varying merit built around the success of a single act. Loyalty being a similarly vaunted tenet of rap, such crews frequently enjoy the benefits of their affiliation with said success story via promotion, deals, and collaborations they wouldn’t otherwise get, and at times this can lead to criticism of their benefactor. Simply by virtue of being great, legendary acts take constant flak for sharing their gifts with inferior entities. Sure Memph Bleek was never going to approach Hov on the mic, and perhaps there were rappers who could have done more with an album’s worth of Pete Rock beats than Deda Baby Pa, but then again Jay and Pete are such singular talents that virtually any collaborator is going to pale in comparison.

Depending on who you ask, DJ Premier is the best or at least a top three producer in rap history, yet he too has been faulted for maintaining a stable of fairly interchangeable East Coast MCs to grace his beats. For every master with a four-letter stage name ending in “-ru” there are three or four Lil Daps, Smiley the Ghetto Childs, Shiggy Shas, and Blaq Poets – faceless hood reporters who’ve inexplicably been cashing in on Premo beats for the better part of two decades. Big Shug first appeared on Gang Starr records in the early ’90s, but his moment of glory on the “Moment of Truth” posse cut “The Militia” came a long fourteen years ago. The ridiculously-titled “I.M.4-EVA” is his fourth LP since 2005’s “Who’s Hard,” and like its predecessors it features a slew of Premo productions. I hate to fault Premo for his loyalty, but with such a modest level of output it is somewhat disappointing that he still devotes so much to the never-weres of the Gang Starr Foundation.

I want to like Shug. He’s a no-frills Boston MC who knows how to surround himself with good company if nothing else. He manages to rhyme more or less on the beat most of the time and he can remain inconspicuous on a good posse cut. The problem is that he’s like a complete caricature of a mid-’90s gangsta rapper – all posturing and zero reflection or insight. What worked for sixteen bars at a time on posse cuts in ’96 grows insufferable on a full-length in 2012, especially given how poorly his writing is:

“Dear Kerry, when your moms was pregnant, I was overjoyed
Hopin’ she was pregnant with a boy
When the ultrasound confirmed the thought that I had
Here we go again, two times dad
I was happy from the line of scrimmage
Hopefully you would be a boy, in my spittin’ image
September seventeenth was the day
You came out healthy and a-okay
I bought you baseballs, footballs, basketballs
Hopin’ that you’d be over six feet tall
So you could have a shot at the NFL
And if not you would grow to be a great man
Understand, your moms, I couldn’t live wit’ her
But I couldn’t live without you
So we spent time a lot, chip off the old block
And I’m so proud to be your pops
Even though your moms brought court back in my life
I still wouldn’t think twice, and I love you”

Sure the rhyme schemes are elementary and the writing is laughably bad, but at least he has his priorities in order. Shug continues his inadvisable practice of singing his own hooks on “I.M.4-EVA,” on which he also carries a bizarre obsession with people with bad breath, ruminating on halitosis on multiple tracks. The hooks are bad and you’ll be hard pressed to find so much as a lick of substance on any of the eighteen tracks.

Most of Premo’s beats here could be accurately described as “autopilot Preme,” boasting the same wistful whirling violins and dusty keyboards that he’s been duplicating since the last Gang Starr record. They still carry the singular magic of a Premier beat, but anyone looking for the brilliance of his “Moment of Truth” or “Livin’ Proof” material need look elsewhere. Premo disciple Kid Called Quest contributes five tracks, and Fizzy Womack also lends multiple productions. “Hardbody” is a solid if solidly unmemorable posse cut with Fat Joe and M.O.P., and the energetic “For the Real” features Termanology, Slaine, Reks, and Singapore Kane. Unfortunately, that leaves sixteen tracks for Shug to fill by himself. “Spit Six” boasts the tired concept of using a number to direct each line, and the Guru dedication “We Miss You” seems trite, lending no insight into his relationship with the fallen great. As for “Blue Collar,” “Big Fly Homie,” “War in the Club,” and “My Kids,” well, they’re pretty self-explanatory. The remainder of tracks consists of Shug touting a longevity that if not undeserved is highly unlikely, and he makes sure to hit every cliché he can along the way: rhyming “Osama” with “Obama,” spitting game at clubs, you name it.

Premo’s nothing if not loyal, and like it or not Big Shug has at least a bit part in one of the rap canon’s greatest legacies. That said, labeling him limited is putting it nicely and “I.M.4-EVA” is another album as appropriately forgettable as the rapper himself. Even with an array of solid beats from sought-after producers Shug can’t shake the mediocrity that’s been his plight since “Hard to Earn.”