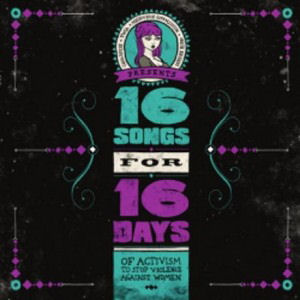 Various Artists :: 16 Songs for 16 Days of Activism to Stop Violence Against Women

Respectfully I’m going to defer the opening of this review to a statement of intentions and goals from the producers of this album. I’m quoting directly from the CASA House website here, which you can access yourself by clicking on the cover art for this release.

“The project was developed as a means of engaging young people who were accessing housing support services around the issues of violence against women. This engagement has been undertaken through group work with young people (based at Melbourne Citymission) and the production of a hip hop CD which contains messages against violence and promotes respectful relationships.”

Now if one were to question whether such high-minded idealistic activism is worthwhile in this cynical age, one has only to look at the year 2011 in the news to see the powerful of activism put into action. From the Arab Spring to Occupy Wall Street, activists made their voices heard loud and clear, often risking police brutality or a sniper rifle’s bullet in the process. Rebellion against the status quo toppled the regimes of long-entrenched political and military dictatorships. Activism is making a difference even in the early stages of 2012, as an unlikely coalition of hackers, musicians, bloggers and corporations banded together to protest the dangerous provisions of the Stop Online Piracy Act. (The first round of the war has been won, but the internet should remain ever vigilant.)

Hearing Lamont Dozier’s “Shine” sampled in Miss Cheek’s track gave me an instant flashback to the halcyon days of Soundbombing compilations, in particular the Pharoahe Monch track “Mayor.” So to say Incredible Beats did something incredibly original would be a lie, but given sampling clearance costs have made it increasingly rare to use dope loops, I both applaud the decision to go back to the well to give this one more exposure. I only hope that given the album’s noble intentions that they didn’t get raked over the coals for clearance by Universal Music Group (incidentally one of the strongest proponents of SOPA). I still believe sampling shouldn’t be a crime, but I’ll leave it to another group of activists to take up that cause.

That in a nutshell is what’s worthwhile about “16 Songs for 16 Days to Stop Violence Against Women” though. The artists and organizations involved in this album didn’t wait around for somebody else to get the job done – they said “Why not us? Why not here? Why not RIGHT NOW?” If you thought violence against women was only an issue in third world countries, poverty stricken neighborhoods, or repressive regimes, the fact this album was packaged and produced in Australia ought to bring the issue into sharp relief. It’s an endemic global problem that crosses all boundaries of race, color, religion and wealth. For many of us who listened to hip-hop for years, the casual misogyny of the word “bitch” is both familiar and unthreatening. Perhaps it shouldn’t be so.

I can’t say that “16 Songs” will change minds or hearts, as the abusers of women have no inclination to listen to an album like this, nor would the messages of Pegz (“Burn City”), Thundamentals (“The Mash”) or MC Que (“More Front Than Myers”) reach their hardened hearts. What is inspiring though is that the collaborators of this album are (1.) supporting a larger campaign of awareness this album is named after and (2.) agreed to give away 5,000 copies of this album to young people across Australia in need of shelters or housing after an assault. The message THEY will hear is empowering – a coalition of men and women who came together to record songs decrying the casual and lackadaisical attitude about brutality toward our mothers, sisters, aunts and daughters. Their mission may be local, but their songs and message are well produced enough to be universal. Support the album, the movement, or both.