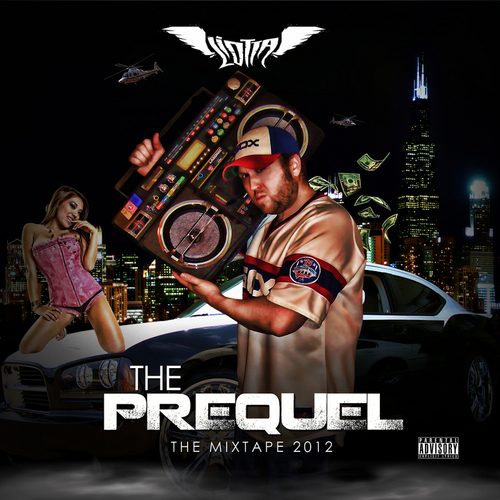 Liotta is not the easiest rapper to look up information on. Search engine entries are going to turn up as “the actor who played Henry Hill in the movie Goodfellas,” and to be honest that was the first person I thought of when I opened his package. There was no one-sheet inside, which in some respects is refreshing for a reviewer as they tend to be a cliche over time, but the only link anywhere on his CD artwork was @Liotta. The puzzling thing about that is he doesn’t seem all that into Twitter – only 105 tweets as of this review with the last one being back on September 22nd.

Fortunately with a little poking around I finally came across the CD Baby page for his album. Distribution seems fairly widespread for Liotta as his album is also available on Amazon

and iTunes. Having enough material for release is definitely not a problem either – as “The Prequel” is 22 songs and nearly 80 minutes long. Oh – and he’s “The Bad Man.”

Depending on your point of reference, the tune he’s sampling for this track is either The Who or Limp Bizkit, although the former are the originators and the latter are increasingly hard to fathom (though perhaps signing with Cash Money will be their career resurrection). Sampling is not always the operative word though. The opening song “Back in the Day” basically jacks the Ahmad song of the same name wholesale, down to the scratchy sound of the record and Liotta singing his own version of the hook. “Bad Santa” jacks A Tribe Called Quest’s “Buggin’ Out,” and if you have to ask where “Just the Two of Us” comes from I suggest you get some Grover Washington Jr. or Bill Withers records for your library. It’s not hard to see why Liotta might want to be somewhat low key, given how impossibly expensive it would be to clear all the samples on this album.

Ostensibly “The Prequel” is exactly that – the release preceding his self-produced release “Rap Music Heaven Is An Emcee’s Hell.” It’s fair to look at “The Prequel” as a mixtape under those circumstances, and not judge it by harsher standards of originality for a full album. It wouldn’t have hurt Liotta to advertise it that way. Over the 20+ songs it’s hard to figure out what Liotta wants to be though. He’s from Chicago and sports a White Sox hat, but he doesn’t spend an excess of time rapping about it. A lot of his songs are listed as “remixes” but without knowing the originals there’s no point of reference. If Liotta isn’t his birth name then one could assume he wants to be thought of as a Goodfella himself, but MC Eiht uses more samples of the film in one song than Liotta does on this whole album. Let’s look at “Victorious”:

“Wash off the warpaint, leave my team blind
Got me throwin up the finger, fuck a peace sign
My strength been defeates by these weak minds
Now this hate got me faded when I rewind
In the meantime I seek a strategy and it has
to be a written masterpieceâ€¦
Internally you can’t damage me, and family, we nasty”

Liotta’s voice is not unpleasant, although it’s a bit gruff, and due to the mixing it can be hard to discern over the music. There’s a little bit of the Group Home syndrome to his flow though, in that he’s trying so hard to be taken seriously his vocals can be unintentionally monotone. I’m a bit perplexed as to how to take Liotta on the whole. Given he’s constantly sharing the album with guests like Maximus, Diggs, Poe Pro and Solo Tha Ghost (which does at least break up the monotony) he doesn’t get to establish his personality that fully. “My Angels, My Demons” shows that he has some potential, but it also makes me want to listen to Jay-Z’s “Where I’m From” instead of Liotta’s version. For me to really get a handle on Liotta I need more than what I can discern from this mixtape, and fair or not I can’t strongly recommend him on the basis of this one. I wouldn’t rule out listening to “Rap Music Heaven” if it’s self-produced though – we’d finally get a raw unfiltered look at what Liotta’s about without anything else getting in the way.