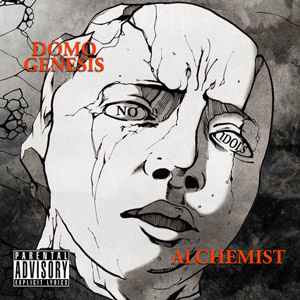 Domo Genesis & The Alchemist :: No Idols

One of the marks of any great producer is that he understands his artists. Rick Rubin understood Run-D.M.C. The Shocklees understood Public Enemy. DJ Premier understood Jeru the Damaja. Timbaland understood Missy Elliott. Organized Noise understood OutKast. Dr. Dre understood Eminem. Rap music’s elite producers push an artist’s existing qualities firmly believing that together they are able to reach the goal they set for themselves. Enjoying one of hip-hop’s most enduring careers behind the boards, The Alchemist possesses the musical relevance and networking skills to be in demand to the present day when high-profile releases are given away for free and new beatmaking talent sprouts on a weekly basis.

In 2012, he completed projects with both New York’s Action Bronson and Los Angeles’ Domo Genesis. The bicoastal presence is nothing new for ALC, whose closest affiliations for years were Mobb Deep and Dilated Peoples. But while “Rare Chandeliers” stands to reason given Bronson’s overall New-York-ness, “No Idols” is a trickier task. Domo Genesis is part of a crew that came out rallying against the hip-hop establishment and for the better part of its existence has created its own musical identity without outside help. The Alchemist gets the Wolf Gang’s nod of approval because his track record speaks for itself – Alan the Chemist understands rappers, period.

Admittedly, Domo Genesis is not that hard to get, at least compared to crewmates Tyler, the Creator or Earl Sweatshirt. His previous full-lengths, “Rolling Papers” and “Under the Influence,” ultimately lacked the focus that separates plain stoner rap from hip-hop with a truly ‘higher’ purpose. Already indicating a different state of mind via its title, “No Idols” attempts to define Domo Genesis the artist with a variety of short but themed songs. “All Alone” echoes Z-Ro sentiments of feeling alone (or wanting to be alone) despite being surrounded by a social circle (family, friends, fans). “Prophecy” finds him reporting live from the rap struggle over a drum-free track driven by a sentimentally shrieking electric guitar, engaging in what we’d typically label as East Coast lyricism:

“It’s heavy as heaven, I’m workin’ like 7-Eleven
And my thoughts gettin’ hectic, in need of a blunt and Excedrin
Niggas gon’ hate but it’s only nature, so fuck it, I let ’em
Shit, I’m just focused on the goal cause I know where I’m headed
If I can help it I’ma die a legend
Live a wild life, die hard, and let my children tell it
[…]
Whoever knew it’d be this hard breakin’ in on this rap shit?
Left college to try to feed mama, so I can’t quit
[…]
I’m ridin’, nigga, till the world ends
with a gang of kush and my favorite girlfriend
Though it’s seemin’ like I’m caught up in a whirlwind
I’m puttin’ work in and I ain’t even catch my first win”

On “The Feeling” Doms aims to share the positive vibes he gets from his current situation, declaring over a subdued but still buyoant beat:

“When your days become your dreams and your dreams become reality
sleep is obsolete because your mind is workin’ rapidly
when people who laugh take your success as a casualty
when you get that feeling like your vision is in fact in reach
I wish that feeling to all my bitches and all my niggas
I hope you realize our path and maybe walk it with us
May all your pain be champagne, we all can live up
So when I roll up to celebrate, you should spark it with us”

“The Feeling” and “All Alone” in particular speak directly to Odd Future’s fanbase, offering a snapshot of the collective’s high times in 2012. The OF follower’s thirst for dark humor is also quenched with features from Tyler (“No Idols”) and Earl (“Gamebreaker”), which also serve as a reminder that (unlike Earl) Domo has fully emancipated himself from that trademark Tyler flow. Rather, vocally the Domo Genesis of “No Idols” brings to mind once-hopeful West Coast MC Bad Azz, a young voice spitting seasoned thoughts.

Cameos from outside the core camp include Smoke DZA on the predictable “Power Ballad,” Freddie Gibbs and Prodigy on the Curren$y-ready, lush “Till the Angels Come,” and SpaceGhostPurrp on the horror flick-tinged “The Daily News.” Cinematic soundscapes also provide the tapestry for “Fuck Everybody Else” and “Elimination Chamber,” a nonchalantly nihilistic posse cut where Domo holds his own alongside Earl Sweatshirt, Vince Staples and Action Bronson. That leaves us with the prerequisite ode to Mary Jane, “Me and My Bitch,” and to doubt if Alchemist can match it with a fitting beat would be downright foolish. The expected conclusion is that Al is able to fulfill Domo Genesis’ varying needs. The credit for “No Idols” being individual instead of interchangeable, though, belongs to Domo.