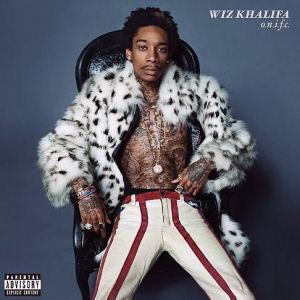 Cameron Jibril Thomaz b/k/a Wiz Khalifa has certainly made a big impression in a short amount of time. “O.N.I.F.C.” (an acronym for “Only Nigga In First Class”) is his third album since 2011 if you’re including hiscollaboration with Snoop Dogg, and if you’re counting mixtapes he’s been even busier than that. Although he’s been an active emcee since 2005 it was the release of “Black and Yellow” in 2010 that propelled him to superstar status, spawning an unlimited number of parodies and remakes in its wake. These days he’s “that rapper” that has to be on every remix or mixtape if you want to be official – a very enviable position to be in. Wiz lives by the motto of his first single from this CD: “Work Hard Play Hard.”

The first time I heard the song I honestly thought it was a new release from DJ Quik, which I mean as the highest form of praise. Even though Wiz calls Pittsburgh his home, he has the natural charisma and playeristic attitude of the man who made getting fucked up anthemic on “Tonite” back in the early 1990’s. Now admittedly Quik would have to pitch down his vocal tone a bit for it to be a perfect fit, but try listening to both artists with your eyes closed for 30 seconds and tell me you can’t imagine they were twins separated at birth. As for “O.N.I.F.C.” he’s clearly not the only brother on his flight, and in fact some of the passengers on the list struck me as a bit odd – Cam’Ron for one.

“I told her leaving God (Bye) or she can stay and breathe
She looked and said, ‘Cam you don’t know what to say to me’
(Oh really?) Paparazzi oh baby girl, no playin please
Now point that camera at my pockets cause they sayin ‘Cheese!’
Put up your life we gambling, next time we out here scramblin
I’m Killa, he Wiz, but all our checks are Cam’Ron
Next chapter, next chapter, f-f-f-fatigues and cannons
Fresh rapper, fresh rapper, right here, where I’m standin”

To be fair the I.D. Labs beat is so lush that it’s impossible to hate on the song, even if Cam still rhymes at a kindergarten level. Labs is a frequent collaborator and is responsible for many of the album’s best tracks including “The Plan” featuring Juicy J, “Got Everything” featuring Courtney Noelle and “Paperbond.” The latter is so hypnotic that I’d personally enjoy a completely instrumental version more than the one with Wiz’ rap, though it’s his typical flossing fare.

“Uhhâ€¦ get the cork out the bottle
Get that money up and make your style a lil harder to follow
I’ve been hustlin all the time, that’s the only thing I know
Now my watch is worth 30 thousand, got Cuban links and Italian
Boy I’m gettin it; ridin in my ride lookin filthy rich
Killin these niggaz I ain’t innocent – my bad – ain’t paid the cost
See they just watch me then copy my swag
Say I fell off that’s where you lost me
How’s that when my name is in my upholstery?”

I’m certainly not going to say Wiz fell off. After all he’s at the point where collaborating with Akon on “Let it Go” and The Weeknd on “Remember You” are not anomalies, they are par for the course. And judged on his own standards, Wiz is hitting mostly birdies here, with only a few bogies evening things out a bit. “Its Nothin” might be the most appropriate name for a song featuring 2 Chainz in history. I understand Wiz wanted to have an epic song but 9:28 of “No Limit” is just plain tiresome. And it might just be me but the clave sounds on “Fall Asleep” would have the opposite effect – they seem harsh enough to wake you from the deepest slumber.

For Wiz Khalifa “O.N.I.F.C.” is all about soaring to new heights, but the irony of having dope producers and interesting collaborators on his tracks is not lost on this reviewer. Juicy J for one was riding first class long before Wiz dropped his first album, and whether I personally think he’s that hot or not Cam’Ron has been a star going back to the late 1990’s. It’s the height of arrogance to think he can soar in the stratosphere all alone, but since his album contradicts that premise, one can surmise he’s just joking and we’re all being taken for a ride figuratively and literally. While “O.N.I.F.C.” doesn’t break new ground musically for Wiz, certainly not lyrically at least, his flight won’t be grounded any time soon.