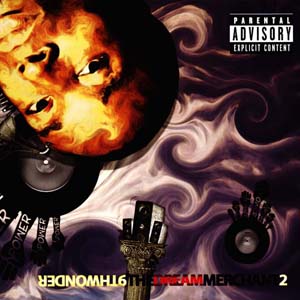 Scholars of ancient times referred to seven great wonders of the world. These were places of such amazing architecture or astounding beauty that none other elsewhere could compare. Much later the Sugarhill Gang came to hip-hop as the “8th Wonder” of the world to make us rock to the rhythm that made fingers pop. Their ascendance from an urban cultural movement to mainstream musical popularity was astounding. The term “9th Wonder” has been floated around several times since, including the lead single off Digable Planet’s much slept on “Blowout Comb” album, but few have owned the phrase like Patrick Douthit. The last name alone reads like a challenge to inferior producers – do you doubt the hits of Patrick Douthit? You know Douthit’s going to do it. It’s undoubtedly better he took the name 9th Wonder to stifle the bad puns of rap critics.

This critic is wondering where “Dream Merchant Vol. 1” went. Perhaps we’re supposed to imagine all the work he’s done to date is the first volume, which is not such a bad idea. Besides producing multiple classic albums for Little Brother, 9th has worked with everyone from underground favorites like Buckshot and MURS to mainstream acts like Destiny’s Child, Jay-Z and Lloyd Banks. His sound is not as easily pigeonholed as other top name producers. Premier is known for heavy bangers with scratched hooks. Pete Rock gets his rep from how he loops horns. Timbaland is known for his quirky electronic sounds and experimental beats. How do you define 9th Wonder?

“Eclectic” would be a good place to start, and the “Dream Merchant Vol. 2” album epitomizes his unbound creativity. There’s no shortage of diversity to the guest artists who show up to share time or a rhyme on 9th’s beats. “Brooklyn in My Mind” brings together the likely collaboration of Jean Grae and Mos Def with the unlikely collabo’ of Memphis Bleek. Rather than clashing creatively, the triumverate seems perfectly paired over 9th’s soaring brass landscape and pounding bass. The only person missing from this mix would be Masta Ace, although he is scratched into the chorus “doing it up Crooklyn style.” The North Carolina native isn’t going to limit his scope to the East coast though. Royce Da 5’9″, Naledge and Vandalyzm rep a broad swath of the Midwest on “The Last Time” with a 9th track designed to bounce your Jeep all the way from Detroit to St. Louis. More obscure rappers like Ness and Skyzoo get just as much change to “Let it Bang” as established MC’s like Saigon on “Saved.”

It’s rather difficult to find anything to complain about on “Dream Merchant Vol. 2.” From start to finish the rhymes are for the most part well crafted, the hooks are cleverly intergrated, and 9th clearly brought out his A-game material and didn’t just dump leftover beats from his next superalbum collaboration. Perhaps the one criticism some 9th fans might make is that he’s stated he’s now seperate from Little Brother yet they are still present on the album’s presentation. Frequent LB guest Joe Scudda appears on “Saved,” Rapper Big Pooh rhymes on “What Makes a Man,” close affiliate Chaundon is on “Sunday” and there’s an entire LB track titled “No Time to Chill.” It’s hard to explain what his relationship is with the group these days, especially given the rumors he produced one track (or less) on the next LB album, but you’d think they were still tight here and you certainly wouldn’t have cause to complain about the quality of said songs.

The only track on “Dream Merchant Vol. 2” that leaves this writer completely flat is “Thank You” by D.O.X. and O-Dash, where the bass drum kicks seem overmixed and completely drown out the underlying melody. Otherwise for anybody who has been a fan of Patrick Douthit’s work, there’s little doubt he’s still doing it strong even on the solo tip.