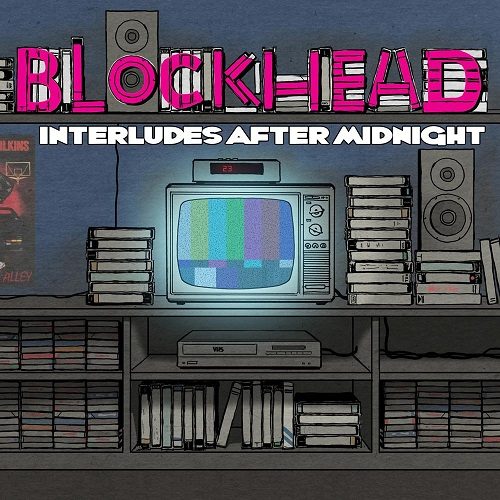 New York producer Blockhead has been making beats since the pre-MP3 days. He’s probably best known for his work with Aesop Rock, but he’s also produced beats for Murs, Cage, and Open Mike Eagle. “Interludes After Midnight” is his fifth album of instrumental hip-hop since 2004, following 2009’s “The Music Scene.”

Out of all of the artists whose music gets labeled “instrumental hip-hop,” Blockhead comes closest to fitting the definition. It’s a stretch to see the relationship that music made by Flying Lotus, Shlohmo, and Nosaj Thing have with hip-hop. Not so with Blockhead, who grounds all of his experimentation in a steady hip-hop beat. As a result he is less adventurous and boundary-pushing than some of his peers, but his music is often more satisfying to listen to.

The title of the album refers to the late-night public access television shows that Blockhead used to watch growing up. It also clues the listener in on the sleepy vibe of the album. The music feels like the soundtrack to the early morning hours, when the world seems surreal and lonely. As with his earlier work, “Interludes After Midnight” falls between instrumental hip-hop and downtempo electronica. It manages to meld hip-hop beats with the languid energy of downtempo. Fifteen years ago this might have been called trip-hop, but that label seems too anachronistic and limiting for Blockhead.

Blockhead’s music is made by layering on samples and sounds. It’s hard to unravel what the sounds are or how they were constructed. The opening track, “Never Forget Your Token,” has a sample from a psychedelic rock song urging you to “buy yourself an underground ticket/Take the subway to the end of your mind,” and then mixes in a vocal sample from a rap song later in the track. He builds in new instruments and sounds into the mix, including a guitar solo and several different percussion elements. It’s all grounded in banging drums, which gives the song, and the album, a sense of continuity and cohesion.

In fact in many ways “Interludes After Midnight” feels like one long song divided into different parts rather than a series of distinct tracks. While the songs sound distinct, there is a melancholy vibe throughout the record that unites all of the tracks. Maybe calling it one long song is the wrong description. It’s almost like twelve different ways of interpreting the same emotion or thought. Which isn’t to say that it all sounds the same. “Panic In Funkytown” is upbeat and bouncing, with a middle eastern flair, while “Hungover Like Whoa” is more sleepy and pretty. “Beyond Reach” features vocals by New York singer Baby Dayliner, and “Smoke Signals” has a heavily reverbed beat. Despite the sonic differences of the tracks, the overall emotion they all evoke is the same: a sense of sadness and nostalgia.

As with his previous albums, the songs here are all around five to six minutes long, giving them much more time to percolate than the ninety-second snippets that are typical of beat albums put out by Madlib, Jonwayne, or even Dilla. Blockhead uses this extra time to build the song up, adding pieces, taking pieces away, and really sculpting an experience. In that way his music is spiritually closer to electronic artists like Burial, even if it is sonically closer to Dan the Automator or DJ Shadow. The long running time and mellow vibe doesn’t make for the most arresting listen, but these songs will get under your skin if you let them. I streamed this album online for months before I realized that I needed to actually own the album so that I could listen to it when and where I wanted.