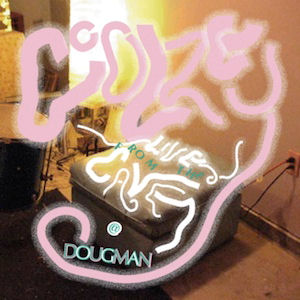 I’d like to request rappers not send personal notes with their albums. It’s not that I don’t appreciate the thought, and it’s not that I’m trying to single out Coolzey for it, but it disrupts the critical process that goes into reviewing an album. The digital discourse of conversing back and forth via e-mail is far easier to detach yourself from when it comes time to write a review than a handwritten note which says “Hey Flash – how are you doing? How’s things in the your neck of the woods? Say hi to my buddy so-and-so next time you see him.” The problem is two-fold – one is that you can’t give the album to another staffer for review since it was sent to youPERSONALLY. The second problem is that if you decide to review it yourself, bias is attached, because the rapper is treating you like a friend and expects the same treatment back. There’s nothing quite as awkward as writing a review that the recipient is likely to write you a follow-up e-mail about (as opposed to another letter) saying “I can’t believe you didn’t get me Flash. I thought you knew me better than that.”

So Coolzey, bro, I’m going to take a rather unusual tack for this review – one which the readers of this site are not likely to see again for a long time. First of all I’m going to apologize that this review took a long time, because for all of the reasons listed above in the first paragraph, I didn’t know how to approach it. Secondly I’ve got to ask you – why do you keep listing a website on all of your albums which for all intents and purposes seems to be held by a Japanese domain name squatter? Third of all I have to ask what you were thinking on “Live From the Cave @ Dougman.” I know you wrote in your note that “it might not be your kind of thing.” Well that’s not exactly true my friend. Strictly speaking there’s nothing wrong with “Dougman,” particularly songs like “Is Better Off Alone,” if you’re in the mood for some acoustic Kurt Cobain. You see, even though you know me and we both know this site is called RapReviews, I think both of us realize this is not a rap album.

Now on the jacket of the album itself, you clearly appreciate the art of self-deprecation, which I admit I find an endearing quality in the music business where so many people have tremendously large egos. You write that this album was “recorded on a dilapidated, beer-soaked 4-track.” It’s also possible you weren’t kidding – but I’m going to assume that’s your wry sense of humor. I don’t know if we know each other as well as your hand-written note would indicate, but at least from previous album reviews I know you’re a thoughtful and intelligent emcee who (let’s be fair) may be a little bit of an underachiever. It may be that you lack the drive to take your career to the next level, or it may be the lack of ego that doesn’t allow you to get there. Nobody likes being the poor airline employee who has to serve Jennifer Lopez a drink because she won’t “talk to the help,” but that ego also shields her from the barbs of poisonous pens who write nasty things in gossip columns and album or movie reviews. To thrive in the cutthroat world of art as commerce, an inherent belief in your greatness can help.

“If I’m really gonna make my money off rap, I gotta snap
Not like I really give a crap, but apparently I gotta get this
sap for my pancakes, a man makes a million mistakes
I am a hypocrite, but so are you, so go jump in a lake!
One thing I can say is that I am not a fake, for Christ’s sake…”

Coolzey my friend I appreciate you ending “Dougman” with a rap song. It almost feels like an apology to the listeners who know you from that genre, and I have to say the sentiments of “Wire Mother vs. Cloth Mother” are on point, even if I don’t get the point of the title. (I’m sure you’ll write me and explain, but seriously, don’t worry about it.) As we’re all buds here I just have to ask you if “Dougman” is completely on the level. There are times I think it is. Your singing isn’t really all that bad – hell it’s far better than mine has ever been or will be. So what’s the point of “Dougman” – was it just something you had to get out of your system? If so I understand. The problem is that for someone reading reviews about rap, I have to tell them that 1 out of 9 tracks isn’t enough reason to invest $9. Some listeners are open-minded enough to appreciate your Cobain-esque stylings, but many will say you should have just stuck to rap, especially since that’s what you do best. So thanks for the letter, and I’ll be sure to say hi to “insert Omaha/Lincoln rapper here” the next time I see him at a show.