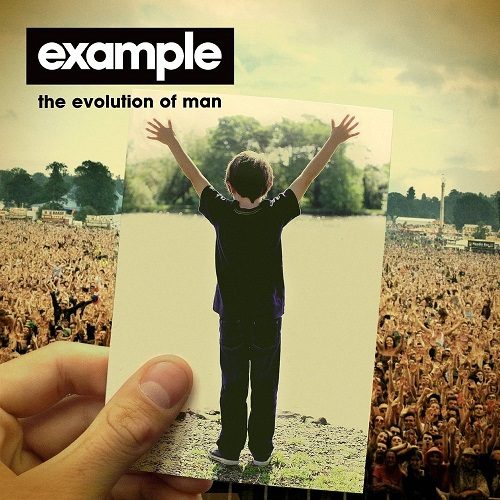 Example :: The Evolution of Man

The artwork for “The Evolution of Man” reminds me of early Oasis albums like “Definitely Maybe” and “(What’s the Story) Morning Glory?” Like Britain’s most popular band of the ’90s, Example uses a simple name logo consisting of white letters in a black rectangle. The comparison is not entirely flattering. Oasis not only struck a chord with the masses, they also had a reputation as pretentious pricks who plunder the legacy of previous decades, specifically the work of The Beatles. Any allusion to Oasis may be purely coincidental, still “The Evolution of Man” is the album where Example orders to plug in the electric guitars. As it happens, at least one track features the guitar work of Graham Coxon of Blur, during an epic battle of the bands staged by British music magazines often portrayed as the white knights to Oasis’ robber baronry.

Of course Example has discovered the ‘rockstar’ role prior to the recording of this album, when he reinvented himself as a somewhat unique combination of rapper, rockstar and electronic artist. “The Evolution of Man” merely enforces the ‘rock’ segment with guitar riffs while the overall formula remains the same. Example sings a few couplets, preferrably twice, sings some more, then eventually pauses for a change in instrumentation, typically an electronic burst of energy, and somewhere in the second half of the song he kicks a rap verse. The order may vary, but that’s pretty much what Example does. E.G. – “Perfect Replacement”:

The fact that he duplicates his melodic inflections from previous albums in detail shows just how formulaic his music has become. In contrast, the songwriting aims to be personal, confessional even. He’s a loser and sinner who does drugs and can’t keep a steady relationship. What was once Example’s forte, to stir up a general nonchalance with emotional outbursts, doesn’t quite seem to have an effect here. He strikes the expected poses, but the excitement is gone. And for someone who seems to be versed in both pop and rap lyrical platitudes like “Keep your best friends close by but keep your enemies closer” and “I’ve been sleeping with the enemy” (from “Close Enemies”) are not exactly a good look. Introspection is usually welcome in a genre that is as immediate and impromptu as rap, but when someone feels sorry for himself in such an awkward way as Example does on “Crying Out For Help,” “Snakeskin” or “The Evolution of Man” you wish you didn’t have to witness any of it.

“All My Lows” proves that the Brit has the means to write genuine tunes that don’t drown in self-pity and substance abuse. Also “Queen of Your Dreams” is not only a pleasant contemporary pop tune, it also offers a break from the first-person disclosures. But too few are mischievous moments like the sarcastic Skream-produced “Are You Sitting Comfortably?” or opener “Come Taste the Rainbow,” where we first find Example assuming a heroic posture (“I used to look up, but now I look down / Bet you’re too afraid to look at me now”), only to break into a self-accusational rap before settling into some shadowy candyman figure that lures to you “come taste the rainbow.” It’s confusing, but at least something is happening.

“The Evolution of Man” confirms that Example is no Tricky or The Streets. In fact he risks becoming a caricature of himself, the accidental pop star that came upon a promising corner of the market and winds up being cornered by pop music’s iron laws. Under which there are only so many ways to combine genres (before things get too ‘experimental’ for mass consumption), and when it comes to electronically produced rock music, others have ventured down that path long before Elliot Gleave thought it would be cool to have some guitars in the mix. Recent megasellers like Muse and The Killers also have a firmer grasp on the fusion of rock and electronica than the bland blend on offer here. Probably Ke$ha too. The Prodigy anyway.

Example is still one of a kind. Like Eminem he manages to infuse music that has an undeniable pop appeal with dark undertones. But that’s about the only thing they have in common. Em is an emcee first and everything second while for Example rap is simply one of the tools he chooses to express himself with as a pop artist. In short, after three reviews this concludes my coverage of Example for RapReviews because from a rap perspective there’s simply too little there to bother.