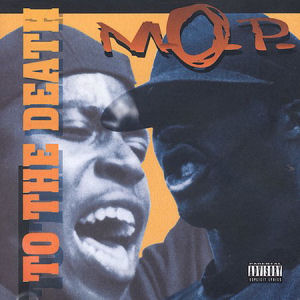 Grant JonesJanuary 15, 2013
Back to the LabLPReview

M.O.P. is my favourite rap group. There I said it. I know most, if not all music critics would cite an Outkast, Wu-Tang Clan or Public Enemy as their favourite rap group due to their influence on the culture and the ability to craft classic albums, but not me. The moment Lil’ Fame and Billy Danze start shouting obscenities and impersonating weaponry I can’t help but smile and nod approvingly. It all started for me (and many other rap fans in their 20s) in 2000 when M.O.P. dropped their most successful album “Warriorz”, and I’ve purchased every album before that and since. I had to dig this album out when I saw it hadn’t been covered here on Rap Reviews, prepare the neck brace and mash the fuck out.

As far as rap debuts go, “To The Death” didn’t exactly set the world alight back in 1994, it was the single “How About Some Hardcore” that sold M.O.P. more than anything as the masters of catchy hardcore anthems. Nearly twenty years later, it still stands up as a classic slice of grimey boom bap, engulfed in confrontational male testosterone. Unlike Onyx who lost their way over the years, M.O.P. has consistently given their fans this aggressive style of rap and “To The Death” doesn’t stray far from this premise. “Rugged Neva Smoove” kicks off proceedings with hard drums and a bassline that sounds like it was left on the Beatminerz cutting room floor. The track is produced by one of the most underrated in the game, long time M.O.P. collaborator DR Period, as is the rest of the album. Although it is an energetic introduction to the record, the DJ Premier remix is the superior version. “Heistmeisters” offers a story-led track with a chorus that clearly inspired “Ante Up” later in their career, and although it’s nice to hear the two MCs telling a story, it’s just another robbery song at the end of the day.

“Blue Steel” is similar to “Heistmeisters” but is less focused and for that it is actually a better track. The beat bangs appropriately and the hook sums up M.O.P. perfectly:

The hooks are catchy throughout, none more so than the aforementioned “How About Some Hardcore?” which should be on any party playlist. Billy Danze must have been angry at some poor chap (or incredibly constipated) when shouting this verse out:

“Don’t sleep, I get deep when I creep
I see right now I got to show you it ain’t nothin’ sweet
Go get your muthafuckin’ hammer
And act like you want drama
I send a message to your mama
‘Hello, do you know your one son left?
I had license to kill and he had been marked for death
He’s up the Hill in the back of the building with two in the dome
I left him stiffer than a tombstone!”

It’s not exactly party material but the infectious hook and repetitive beat are reminiscent of House of Pain’s “Jump Around”, albeit more sinister. Although successful upon release, the single didn’t make the same earthquakes as “Jump Around”, but whereas House of Pain never delivered tracks as classic as their debut, M.O.P. took the “How About Some Hardcore?” blueprint and made a career out of it. The album works better by leaving the single towards the end of the record.

Some of M.O.P.’s best work doesn’t even include hooks, one example being “Drama Lord” which includes Lil’ Fame at his vicious best:

“Which one of you bitch niggaz is ready to start static
Who want it? (I want it!) SLAP LET HIM HAVE IT
Cla-clack (gunshot) bust him down somethin’ sweet
Cave in his chest, leave him to rest on the concrete
M.O.P. ready to hurt a motherfucker
Bustin’ a nigga with the Brownsville sluggers”

There are a few mediocre tracks on “To The Death” that sound like the fellas are on auto-pilot (“Fake Ass Gangstas”) or the beat doesn’t really work (“To The Death”). All four skits are pointless and could have been added to the end of tracks as they average about twelve seconds each, but it’s worth noting that there are no guest features, as quite frankly who would be able to compete on a record with two guys who dominate any record they touch.

“To The Death” lacks the refined delivery that M.O.P. developed on “Firing Squad” and future feature-lengths, as well as the exaggerated similes that added much needed humour to albums like “Warriorz” and “Sparta”. Some would say that lyrically M.O.P. have never been great, but then if you’re listening to M.O.P. for the lyrics you’re either missing the point, or a very violent individual indeed. It’s all about the sheer energy and although Fame & Billy would go on to make better, more polished records, “To The Death” is about as raw as hip hop gets.