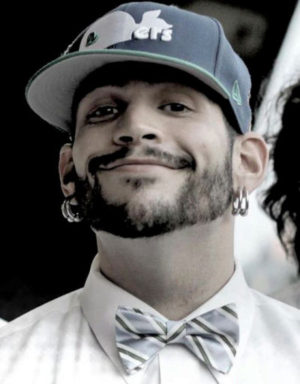 Joey Batts is one of the most recognizable faces in Connecticut’s hip-hop scene. This is, in part, because you can see his smiling face on just about any telephone pole, or road sign, in the eastern half of the state thanks to his “Joey Batts is your best friend” promo sticker. Batts is about more than promotional tactics, however, as he and his band, Joey Batts & Them, have been making a name for themselves with their combination of hip-hop aesthetics and hard rock sound. Whether he draws a listener in with a freestyle about what the people in the crowd have in their pockets, or someone is digging a drum solo, the band’s goal is to have something for everyone, and have all of it be great.

This week, RapReviews caught up with Batts to find out more about his music, his latest album, Bowtie Chronicles

, and the insanity of attempting to film at every landmark in the 860 area code for his video for “860.” Batts also revealed the ups and downs of being everyone’s best friend, which is not as easy as you might think!

Adam Bernard: We have to start this interview by talking about your promo sticker, which says “Joey Batts is your best friend.” What kind of a responsibility is it being everyone’s best friend?

Joey Batts: It’s really tough, bro. At a show I’m giving out stickers, or people are buying CDs and they’re getting stickers with CDs, and I want to rap with them, I want to talk to them. “Hey, where are you from? Is this your first time seeing us? What song did you like? Can you come to another show?” But there are always so many people, and I can only smile for so long, so it’s definitely crazy difficult.

AB: Is that feeling of wanting to talk with everybody how you came up with the concept for “Joey Batts is your best friend?”

JB: The concept came up in a really backwards way. I had a bunch of fucked up relationships, and friendships, ending, and there were big arguments where they were like “stop trying to be everybody’s best friend.” I was so obsessed with the public persona of being an entertainer, and so many of my personal relationships took the brunt of it because I was so busying being quote-unquote famous, so “Joey Batts is your best friend” ended up being kind of a slap in the face of “fuck yeah I can be everybody’s best friend, watch me prove to you that I can be everybody’s best friend.” That’s really where the concept came from. Then I wrote the song “Best Friend” and I was just like this is perfect. Before it was recorded I was like I need to make stickers because I’ll be doing this song all across New England.

AB: It seems to have worked out pretty well.

JB: Yeah, I was talking to Klokwize about it and he was like dude, “you had a genius idea to put your face on the sticker. I wish I could go back and do the same thing.” Now I can’t escape it. “Oh shit, how do I know you? I’ve seen your face on a Taco Bell,” or “I’ve seen your face on a No Parking sign.” It’s great. It probably will eventually get me in trouble with the cops, but I’m OK with it for now.

AB: Moving to your music, you are an emcee who has always been a part of bands. What about being in a band do you prefer to working with a beat?

JB: I never want to make fun of anybody else and how they’re doing it, but I think when you have the live music it’s a little bit more magnetic. If you go to a hip-hop show it’s different because you want to see rappers, but so many other times we’re not playing to a hip-hop crowd, and we’re not playing in a hip-hop venue, so at any given moment if someone walks into the room you need to make sure you captivate them immediately. The cool thing about the band is if you’re not a typical hip-hop person you’ll stick around because you’ll like the guitar, or maybe the drummer’s doing something cool, or maybe you’ll like the bass line. So I think having a band behind me just opens people’s minds up a little more because they’ll stick around for the guitar and all of a sudden they’ll like something I’m doing, as opposed to just opening the door, or hearing the first couple lines, and saying “fuck this, I’m outta here if it’s rap.”

. What was the thought process behind the writing and recording of this album?

JB: I was sitting on a bunch of lyrics, and I sat down with my drummer, and my bassist at the time, and said let’s try to come up with some stuff. We were really worried about sounding like a shitty rap-rock band. We wanted to avoid that. We wanted to get the hip-hop, the boom bap essence of it, and the kind of guitar riffs can we do to make it sound not TOO rock-y. We ended up doing a lot of lyrics driven stuff and the guitar would accompany it. That’s why so many of our songs on Bowtie Chronicles

don’t have main leading guitar riffs, they just accompany the lyrics. The other thought process was, as far as the lyrics and the writing goes, I was obsessed with this whole best friend mentality, and being a superhero, and trying to do everything under the sun. I wrote a couple of songs that really play off each other. I think “Best Friend” and “Bad Guy” play off each other well, and I think “Superhero” and “Noodles” play off each other well because rarely do you hear about superheroes going crazy. If you’re a Marvel comic book head you know that all those superheroes have really dark personalities.

AB: Speaking of crazy, did anything crazy happen during the creation of Bowtie Chronicles

JB: We ended up shooting a video for “860,” and me and the director, we got into trouble when we were shooting. We were getting kicked out of places, and we had to hide the camera a couple of times, and we were doing a lot of driving. That was definitely an awesome road trip to try to get all those shots in the 860. I didn’t realize that the 860 covered so much ground in Connecticut. {laughs}

AB: What was the most interesting place you were kicked out off while shooting the video?

JB: After I took a couple of bites out of the pizza at Mystic Pizza they were pretty much like alright, you’ve been here long enough, you have to leave now. It was funny because I was like “c’mon, you guys shot a movie about this place.” I really wanted to get into the aquarium, as well, but I didn’t feel like pulling up all that money just to get a brief two second shot.

. Do you think Justin Timberlake is jacking your style with his new song being titled “Suite & Tie?”

JB: Oh yeah, definitely. I was thinking about the sophomore album being the Cummerbund Chronicles, then hopefully I can get a spread in GQ. The name Bowtie Chronicles

came to me because I was so sick and tired of my band members wearing flannel shirts. I was like “c’mon guys, flannel shirts aren’t hip-hop!” So I was like screw it, “everybody has to wear a tie tomorrow.” Everybody takes you a little more seriously when you look really formal. It’s been awesome.

AB: Are you still working on your series of EPs based on the seven deadly sins?

JB: Yeah, I actually just recorded two songs for Gluttony, and I should have that done by the end of March, or April, and then I’ll work on Lust over the summer, no pun intended. Then it’ll be over, and I’ll need a new meaning of life.

AB: Just on premise, shouldn’t Gluttony be a 79 minute mixtape?

JB: {*laughs*} I was thinking about having one 12 minute song, but it’s really just me breathing while I’m eating. I think it’d be great. I worked on one song and it’s about eating pasta. I put pretty much every type of pasta into the song. I set out to do this series of EPs a long time ago to challenge myself and I’m really happy to see not only has it garnered a lot of attention, but I’ve made some money off of it and I think people are starting to realize there’s many different levels of it. It’s not like I just called an album Wrath, when you decipher every song you’re like oh shit, he’s really angry, and Envy, he really wants you to be envious, or he is really envious. There are definitely a lot of layers. It really helps me be a nerd on my own terms.

AB: Finally, Connecticut’s hip-hop scene is seemingly in a constant state of flux. Having traveled out of state, often, what keeps you coming back? Is there something you feel you need to accomplish here, in CT, or is your 9 to 5 so solid you aren’t going to leave?

JB: My 9 to 5 is definitely solid, but I wouldn’t chalk it up to that entirely. I love it, man. I’ve tried to break into the music scene on Long Island, I’ve even done a couple shows in Brooklyn, and I love the shit outta Boston, but Connecticut… I think I want to break that mold. I hate the fact that it’s always in flux, and I hate the fact that no one in the upper echelon calls it home. I think I’m obsessed with the fact that it’s not like Connecticut has a favorite son, or a favorite daughter, not that it’ll be me, it would be awesome if it was, but I love the fact that I can call this place home, that I can do everything I am doing for Connecticut, and I love being able to shout out the 860, and I love being able to shout out Hartford, and I think eventually enough people will notice. I think we have enough talent here, we have enough people that like music, I don’t see why we can’t get a solid foundation. I might not see it my career, or my musical lifetime, but I think before I die I’ll definitely see it, and I can say I definitely worked towards it.