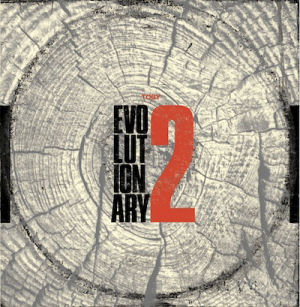 Toby describes himself in the following contradictions: “Common andOutKast, and the acting career would soon take a backseat to his passion for rap. 2012 was Toby’s breakout year with the release of two EP’s, this one obviously being the second, and this review being a little bit overdue.

Better in January 2013 than not at all, the compact but tight “Evolutionary 2” packs a lot of musicality into just barely over 21 minutes on six tracks. Some actors turned rappers take their craft very seriously, others aspire to rap dreams and fall somewhat short. Happily Mr. Ganger is the former and not the latter, and has surrounded himself with a quality crew to achieve his musical vision. Adam Berg plays the strings and synths. Joel Van Dijk plays guitar. Just Matter provides the scratches, and so on. The end result is more of a hip-hop band than a solo act, and that ensemble format serves Toby well. With strong musical backup he’s able to delve into the topics he flows about unfettered, such as on the opening track “Nowhere to Run”:

“Ideas are bigger than the people that have them
People are bigger than beliefs they imagine
Disagree but you can not demonize
All of me cause we don’t see exactly
eye to eye, these hypocrites
don’t have to go tip-toe – why do I?
Don’t have to respect your beliefs
If it does harm then expect me to speak
Shouldn’t let it get in between
my respect for you cause they’re separate things
Your beliefs you’re entitled to
but when they feed your actions the line gets moved
Cause it happens in my world too
and that virus of the mind stays alive through you
And those ideas feed the soil
that we grow in so then the seeds get spoiled
Cause if you tolerate disease
you can plant a million trees but the weeds destroy ’em
If you have a thought, defend it
No one has the right not to be offended”

Throughout the song Toby advocates for respect and tolerance, two ideas which have gotten short shrift of late in the face of jingoistic nationalism – not just in the U.S. but worldwide. This attitude is probably at least partially informed by the year Toby spent in Ecuador, which suggests more rappers from Cali might want to spend a year in a foreign country to broaden their perspective. Each of his songs is informed by a positive attitude, but not tinged with any kind of cornball hippie do-gooderism that often accompanies such albums. “Slow It Down” suggests that we should all take the time to appreciate life more instead of being “all in a hurry going nowhere,” while “Echoes” is a harrowing cinematic narrative of child abuse:

“Used to look into my father’s eyes
Saw the struggle, but he never stopped to cry
When in poverty there’s not the time
You gotta bottle it and hope the product is not too violent
Has me wondering how does one recover when
they see their mother burn alive right there in front of them?
Only fifteen, oldest of his siblings
Forced to raise them while holding to his big dreams
and underneath the surface
that pain was waiting to come up in a burst
And sometimes, my brother got it first
and he’d pass it along to me to cover up the hurt
One day, when it all overloaded
I had it up to here but didn’t know how to show it
so before I might get afraid
I closed my eyes tight and punched him right in the face
Jumped back uncontrollably shaken
Awaiting the return but he showed me restraint
In that space we owned our mistakes”

Toby doesn’t fear getting personal or saying something that has more meaning than causing you to gyrate your hips or sing the hook of his song. That’s not a clear cut road to success in hip-hop these days – in fact it’s pretty much the opposite. Given he’s already had a taste of fortune and fame, one has to have a healthy amount of respect for his choice to make songs like “Echoes” instead of songs like “Rack City,” and as such he’s earned my stamp of approval as more than just a Hollywood hip-hop wannabe. Toby Ganger is the real deal, and if he keeps making heartfelt music like this he’ll continue to earn lauds from critics, even if he doesn’t sell like Tyga.