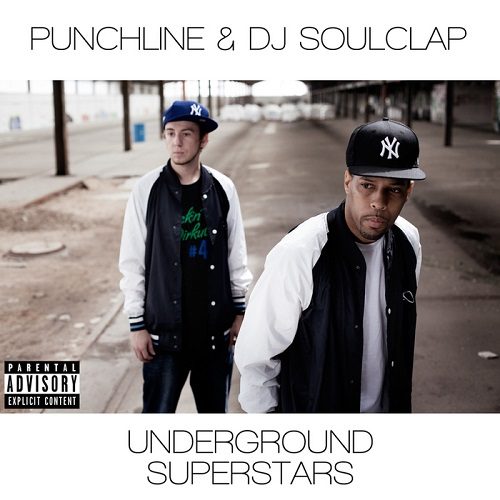 Punchline has been around for a while, dropping tracks since the late 90s with his partner-in-rhyme Wordsworth (one of my favourite MCs). They mostly did battle-rap style verses, but in 2007 they teamed up with the legendary Masta Ace and his accomplice Stricklin to put out probably the best rap release of that year in “The Show”. Although Wordsworth has had the superb “Mirror Music” and last year’s (admittedly underwhelming) “The Photo Album” to showcase his skills, Punch has always just been a guy who jumps on collaboration tracks. And this, his first solo release, proves that he is not quite on par with his collaborators.

Following in the footsteps of El Da Sensei, Ruste Juxx and endless others, Punchline has recruited a European producer to work on “Underground Superstars”. DJ Soulclap is an upstart hip hop producer from Germany, and like his European contemporaries Fabio Musta, DJ Connect and various others, is deeply rooted in the boom bap era. It’s hard to find any of his work online and although he holds his own on this release, there are only a couple of joints here that stand out. “Underground Superstar” is a solid start with Punch throwing punch-lines aimlessly, ranging from garbage to decent: “I don’t rock Afro Puffs but I’m still filled with rage” being one example. In fact Punch’s best lines are when he just rhymes about real shit, as most of the clever lines sound like they are forced and come off corny.

For EMC fans, “Kaboom” is a nice reminder of the great chemistry the four exude when a dope beat is thrown in the mix. It’s probably the best track on the album, and Soulclap uses some sick vocal samples from Big L, Royce Da 5’9”, Billy Danze and Xzibit. My vote for best verse goes to Wordsworth:

“You can’t like that album, the reviews are fixed
without Autotune dudes can’t choose a hit
heated at the features I’ve done, cats send me back the songs
my vocals low when the music’s mixed
don’t be cheap get it mixed it right the cues and pitch
then pay to get it done, use your chips”

Soulclap shows his versatility on “I Go On” with his take on 50 Cent’s “I Get Money” making use of a catchy sample and even recruiting Chaundon (who I have always found sounds like an early 50 Cent). As the album goes on, there is a prominent theme of women running through tracks like “Broken Home”, where Punch rhymes about his mother and his upbringing over a complimentary beat (although the singer provides an awful hook), and “Women or Money” where Punch quite clearly opts for money. It’s almost as if Punch has recently finished with his lady, and gone straight in the studio to vent. “Testify” and “Love Crazy” continue the theme with mixed results. “Tweet” is a good concept track where Punch bemoans the fact his lady is always on her mobile phone tweeting people, but is let down by a horrible hook. Sometimes I wish Soulclap had jumped in with another scratched chorus to keep my attention. Even better, they should have got the R&B singer Tweet involved! I wonder what happened to her…

“Run” is a brilliant slice of raw hip hop where both Punchline & Soulclap keep it simple and deliver a head-nodder accompanied with the classic Run-D.M.C. snippet:

“We swerving down the block running lights and shit
in an all black car like Michael Knight and KITT
tearing up the city streets, some exciting shit
bad things happen on good nights like this
no time to relax, my man got the heat on his lap
now highway controlling my back
would toss it but they might catch it
and I ain’t trying to be locked up five years for no ratchet
time to dip on them, they cut on the sirens
made a sharp right almost crashed in the hydrantâ€¦”

As great as “Run”, “Kaboom” and “I Go On” are, the rest of the album is full of tracks that sound unfinished or come across as mixtape material. Some of the scratches sound weak, the singing is amateurish and two songs are the same. “New York City” is a posse cut with a who’s who list of underground NYC rappers, but is present in “Short” and “Full” versions. Short contains Torae, Ruste Juxx and Pav Bundy whilst the Full version adds in A.P. and Sha Stimuli. It’s a suitably dope cut of meaty hip hop but isn’t the most original idea for a track, let alone two.

As much as I want to like this release, every great moment is negated by a trashy hook or a corny bar. It may be unfair, but having worked with Wordsworth on a lot of his output, Punchline automatically gets compared to Words, who happens to be amongst hip hop’s elite lyricists. Whilst Punchline is a decent emcee and has a likeable persona, he hasn’t demonstrated that he can hold down a whole album like his buddies Words and Masta Ace can. Part of that is down to the hit-and-miss production from Soulclap, so whilst the two remain underground stars, a more refined approach in future could make them sound like the underground superstars they claim to be.