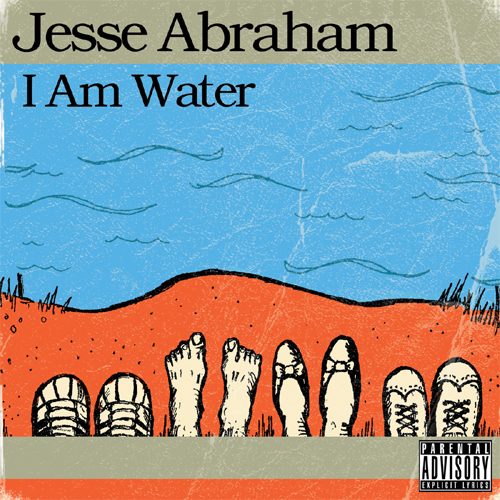 Jesse Abraham :: I Am Water

There’s a certain category of rappers that makes me wonder what their exact purpose is. I usually gravitate towards MC’s with a distinct profile, peculiar angle, particular message, just something tangible that helps me understand why that person decided to get on the mic and demand my attention. There’s an artistic and an economic side to having a purpose. If you’re successful with something, few people will question the point of your endeavors. If you’re unsuccessful, your mother won’t be the only one asking when you’re going to get a real job. Arguing from the side of art, rappers can always refer to the need for self-expression, which is fine, you just have to realize that you wanting to express yourself doesn’t automatically compel me to witness it.

Manhattan native and Brooklyn resident Jesse Abraham makes it easy with his latest release. For a worthy purpose, look no further than the good cause behind “I Am Water,” as all of the artist’s proceeds go to Charity Water, an organization that funds clean water projects in developing countries. But I wouldn’t have been inspired to write the above introduction if my ‘What’s the purpose?’ senses weren’t twitching just a little bit in Jesse Abraham’s case.

In fact such questions may not be completely unfamiliar to Jesse himself. In “The Scene” he describes the bizarre situation when people attending a concert are so busy tweeting about it you wonder how they are able to catch what’s going on. Puzzledly he observes, “You ignore me in person but you show me love on the internet.” Clearly JA is an artist who wrestles with such issues. “I Ain’t Shit – I’m the Shit” finds him torn between qualms and confidence:

“It’s type strange that anybody listens
I’m forever grateful for a moment of your attention
I’m sittin’ on the subway, it’s my train of thought
A token of my appreciation’s all you really bought
when you copped a song or somethin’, or sung along or somethin’
or told me years ago, ‘Jesse man, you’re on to somethin’!’
I’m buzzin’? – You’re buggin’
Just cause your cousin’s husband liked my album don’t mean nothin’
Maybe it does? – It doesn’t
That ain’t the voice of haters, y’all go ahead with that
You’re braggin’ ’bout your haters like it’s an impressive stat
Man, you ain’t bein’ hated cause you’re innovative, jack
If you get so much hate, maybe your shit’s just wack”

Another account of Jesse Abraham’s rapper-meets-world experiences is “Back Off,” where he answers the allegations he faces as a college graduate and Jewish New Yorker, rejecting the stereotypes and painting himself as an independent spirit. Not one to be sour-faced about it, he laces these tracks with humor and irony (“Blogs have red tape / ‘You should sound like Blu’s tape’ / ‘New York needs a Purple Tape'”), and gives the definite answer as to why he’s rapping: “People ask me: ‘Jesse, what are you tryina do with this music shit?’ / Umm… I’m tryina make some music, shit.”

Well then, Jesse Abraham has been making music for some time, “I Am Water” being his third official album. In 2011 he was proclaimed Lyricist of the Year at the Underground Music Awards and in 2012 he had the support of accomplished producer !llmind, who provides five beats for the project. The two don’t possess that “Live From the Tape Deck” chemistry, but !llmind’s beats add musical substance to cuts such as “Parallels” and “1der 2der.” As it happens these tracks also feature memorable female contributions, the former a sung indie pop chorus by TreZure Empire, the latter a cool rap hook by Likwuid. They also highlight JA’s strengths as a rhyme writer, particularly a kind of levelheadedness expressing itself in well-worded lines like “My thrills come to me in the form of blessings / Every day I’m feelin’ lucky / And the more that I am Jesse / then the less that I am stressin’.”

Jesse Abraham isn’t shy about mentioning his day job, as he does in “1der 2der” (i.e. “Wonder Tutor”), again taking a rare position in a genre that so often remains irritatingly vague in its focus on the daily grind. Neither does he flinch when it comes to introspection that probes a little deeper, for example on “Hurdles,” a very personal (and potentially helpful) piece dealing with tragedy and grief, where he opts for a deadpan delivery that corresponds with the restraining of emotions the song talks about.

Elsewhere he’s contagiously spirited, waxing lyrical about music (“The Scene,” “Never Felt High Until Now”) or true love (“Die Holding Hands”), or clowning around on the electro-tinged, biter-themed “Brush Your Teeth” or “Gottdamn Superhero Penguin” informed by childhood memories. Jesse Abraham reminds me of Homeboy Sandman in his untainted approach to the artform and his ability to let go of the reins creatively one moment, and to stop to think the next. Another point of reference could be Eminem, only that Marshall Mathers is inclinced to listen to the devil on his shoulder, while Jesse Abraham usually follows his angel’s suggestions. He also wouldn’t be out of line adopting Random’s ‘Teacher, Rapper, Hero’ slogan and advertising himself as ‘Tutor, Rapper, Hero’. A collaboration between the two sort of suggests itself.

Having put him in such company, there’s a nerdy undertone to almost all of JA’s raps that even when toned down still comes through. Wit and wordplay are not always an MC’s best friends. Sometimes you have to control yourself, if only to avoid having a line like “I don’t take shit, I’m a urinal stall” on an essentially serene track like “Hi, Heaven.” And maybe a spiritual song like “You’re Not a Ghost Anymore” is ultimately out of your league when your voice lacks the necessary gravitas. There’s a way to erase any and all doubt that you’re serious, and it’s not necessarily by rhyming, “I ain’t close to jokin’ / This ain’t no bogus moment / I don’t need some hocus pocus” (“Parallels”). Sometimes less is more, even for rappers.

I have an ideal image of rappers with a mindframe similar to Jesse Abraham’s who can both draw from experience and are not afraid of experimentation. JA may not entirely live up to it, but he has many points covered. Most importantly, with “I Am Water” he demonstrates precisely what his purpose is.