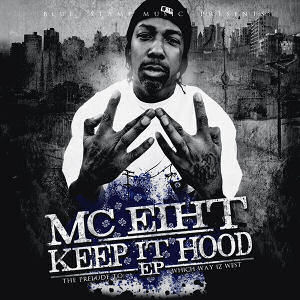 Geaaaaah. It’s almost impossible to write this review without at least once slipping in the colloquial word that has become a part of hip-hop vernacular and almost solely associated with a one Mr. Aaron Tyler, professionally known as MC Eiht. As a member of Compton’s Most Wanted, perhaps the second most known group to emerge from the aforementioned city (the first being NWA) , MC Eiht hit the scene in 1990 with the release of their first album, “It’s A Compton Thang.” Two more albums were released under the CMW name, “Straight Checkn ‘Em ” and “Music To Driveby,” before officially moving MC Eiht to the forefront with his “We Come Strapped” album. For that release, the billing was MC Eiht featuring CMW. Over the course of his lengthy career, Eiht has had many hits, including “Growin’ Up In The Hood” from the “Boyz N The Hood” soundtrack and “Streiht Up Menace” from the “Menace II Society” soundtrack. MC Eiht actually played the role of A-Wax in the latter of the two films.

For many years, MC Eiht was involved in a bitter feud with fellow Compton emcee, DJ Quik and eventually the beef spilled out into the streets and there was loss of life. While not immediately related to the issues between the two, the incident made it seem imperative that these two men settle their differences once and for all. The two have reportedly been on good terms for the past few years.

Never one to rest on his laurels, Eiht has remained active over the years both as a solo artist and with Compton’s Most Wanted. He has also done collaboration albums with the likes of Spice 1, Brotha Lynch Hung and he is rumored to have a project with the legendary DJ Premier in the works. Most recently, MC Eiht can be heard on a standout track from the newest Compton phenom, Kendrick Lamar’s album on the track “m.A.A.d. city,” introducing him to a whole new generation of hip hop fans. With that momentum working in his favor, it seems like the perfect time for the legend to drop a new album of gangsta flows. Consider it done, as Eiht is planning to release “Which Way Iz West” later this year. To tide the streets over for just a bit, Eiht decided to unleash an EP of songs entitled “Keep It Hood.” The EP is produced entirely by Austrian producer, Brenk Sinatra and features scratches courtesy of the aforementioned DJ Premier.

MC Eiht’s voice sounds a bit more grizzly than in years past, but he is still as poignant as ever with his delivery and subject matter. Things open up with “Where U Goin 2” and “The Reign.” It’s only fitting that the first word that we hear uttered by the legendary MC Eiht is a triumphant “Geah.”A well-placed soul sample of The Imaginations’ “Because I Love You” provides the backdrop for “Bigg” as Eiht urges the listener to keep grinding regardless of the circumstances until you can dig yourself out of that stressful situation as he raps:

“I’m back on the block, where the G’s at?
Roll ya nigga something to smoke, I need that
I’m back like the blast from a shotgun
Like a blast from the past, now ya got one
Imma kick a rhyme, and the lines gon tell…
How a nigga steady struggled, everythang’s for sale
Hell on Earth, they makin’ my day bad
Jealous niggas want what the next man had
[…]
Cause nowadays, niggas so name-brand
No flavor, muthafuckas stay bland
A couple grand, I could flip to the next..
Week/weak muthafuckas so peep the context
Another check might change whole lifestyles
So imma stay on the grind, in the meanwhile“

If there’s some crime going down, there’s really no need to call 911. Instead, dial “811,” but it’s more than likely that MC Eiht is behind the caper as he says to blame Grandmaster Flash and “The Message” as he seemingly has been pushed to that proverbial edge. Blue Stamp Music Group is the new label and Eiht gives a major shoutout to it on “Blue Stamp.” The project closes out with “Let’s Do This” and “Make Me Some Mo.” The former is an open invitation from Eiht to anyone who has money on their mind to join the fold, while the latter is a declaration of Eiht’s dedication to the game regardless of his age. It’s the perfect closing track for this brief EP that clocks in somewhere around 22 minutes in length. At the end of the day, this EP is some gangsta music that will definetly appeal to MC Eiht’s core fanbase. It may also end up piquing the curiosity of newcomers as well, but in order to get the full effect of Eiht Hype, listening to earlier albums like “Music To Driveby” and “We Come Strapped” is recommended. Eiht & Brenk Sinatra make a good combination and this EP does well to whet the appetite for “Which Way Iz West” and with a sense of invigoration, the Compton Cyco is sure to keep it as hood as possible. Geah.