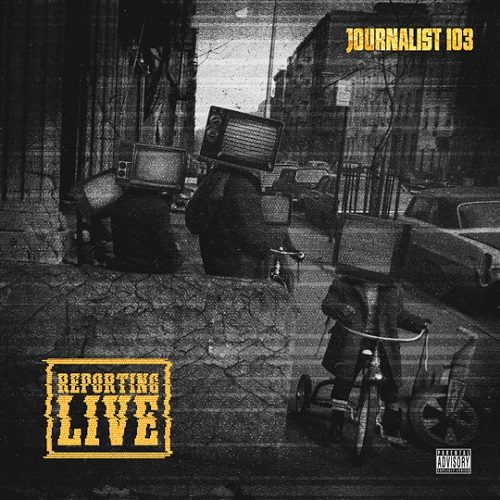 It’s hard to talk about hip hop from the past five years without bringing up Detroit. Most commonly associated with J Dilla and Eminem, the city of Motown has embraced its soulful roots and industrious mentality to consistently produce hip hop artists of the highest order. Elzhi, Royce Da 5’9”, Apollo Brown, Black Milk, Big Sean, Guilty Simpson, the list goes on. Apollo Brown in particular, has been a producer that regularly releases music of the highest quality. Although gaining a reputation in 2009 with his instrumental full-length “Clouds” and the critically acclaimed “The Reset” which featured a who’s-who list of underground rappers, it was 2010 where he produced what was one of the year’s greatest hip hop albums. “Gas Mask” by The Left (Apollo Brown, DJ Soko, Journalist 103) was a modern classic and still sounds fresh three years later. Fellow RapReviewer Pete T. was equally impressed:

“Journalist’s all-too-real narratives and Apollo’s nods to classic soul could hardly have come from another city. An artistic statement and a brilliant debut, “Gas Mask” should be Motown’s unofficial soundtrack, but its listenership should know no regional boundaries.”

Whilst Apollo Brown has gone on to create superb LPs with Boog Brown, O.C. and Guilty Simpson, there’s been little to report on Journalist 103. I started to worry when “Reporting Live” only featured one Apollo Brown production. Could Journalist sound so passionate over different production? “The Foundation” is certainly a solid start:

“Now that the foundation been laid, and my pillars complete
allow me to say my piece, I’ll make it brief
my goal is to unleash that lyrical inner beast
that’s been starvin’ now it’s time to feast
let’s put it to a cease, as long as I’m rockin’ a steady beat
I’ma cock back and aim my piece
at the belly of the beast type Machine that put’s ’em in Rage Against
I’m not strivin’ for the dollars or the cents
I’m considered America’s nightmare, problem for the Senate
just ’cause I spit it how I live it
I try to make my tone coincide with my actions
whilst the rest of you rap niggaz are merely actin’
I’m here to bring the damage…”

On paper, Journalist’s rhymes aren’t particularly newsworthy, but the passion he brings to a record tells another story. Much like fellow Detroit MC Guilty Simpson, Journalist has a hard hitting, definitively rugged style of spitting. The two actually collaborated on the aforementioned “Gas Mask” with “Reporting Live” being a journalistic “report” on the gritty blocks of Rock City. While “Reporting Live” (the album) doesn’t adhere to Journalist playing the role of a news reporter, he simply does what all great rappers do and reports to listeners on what he sees.

“Rockstarz” has nothing to do with wild debauchery, but The Snowgoons provide a boom bap-infused production that will have anyone smashing up hotel rooms. Whether it’s the Biggie sample on the hook proclaiming “your reign on the top was short like leprechauns” or Journ’ claiming he’ll make it bang without the parties or rock stars, it’s one of the best tracks on the album regardless of the played out “this is real hip hop” message. “Where Is The Love” reunites Journalist with Apollo Brown for a monstrous horn-infused number which features a forgettable verse from Vstylez, whilst Journalist himself is usurped by the underrated Eternia. Hip hop needs another Eternia record!

The producer who impresses the most was Lex Luthorz who is behind “The Foundation”, “Do What I Do” and “The System”. “Do What I Do” initially seems like a clichÃ©d piece of hip hop about rapping regardless of wealth or success, but the slightly unconventional singing from Jack Freeman saves it, and becomes somehow infectious. “The System” is amongst the stronger efforts from Journalist, as he provides an informative rap on life as an American over booming kicks and snares:

“Let’s talk about the crime rate, 70% are of my kind
It’s who you’ll find doin’ the jail time
’cause of the hard time, so I laugh when they talk recession
’32 still livin’ a Great Depression
let’s talk about the music
every rapper swearin’ he the realest
but the rap he spit I hardly feel it
it sounds like a gimmick, so I promise to be authentic
in every lyric you feel it in your spirit”

“Danger” sticks out like a sore thumb with crashing drums and an overpowering appearance from Freeway. It just feels a bit forced when the rest of the album bangs without the need for forceful aggression. “Hear Me” thankfully has a soulful production from The Audible Doctor (of Brown Bag Allstars) which wouldn’t sound out of of place on a New York record. The consistently impressive Saigon adds a strong verse to proceedings, but the usually reliable Fashawn disappoints with a lazy impersonation of Kanye West. It’s a real shame, as the stop-start flow comes off as half-assed. “Moving 2 Fast” has Journalist warning others about jumping into relationships with two feet, backed up by another smooth vocal sample, whilst “Arson” boasts a floaty flute loop for Journ’ to viciously attack the mic with vicious vigour. There are a few mis-steps however. “Dreamer” features production that just isn’t strong enough when compared to other tracks on the album, whilst “Walk With Me” showcases Oddisee’s talent at production but underwhelms lyrically.

“3 AM” unexpectedly documents drug-addled mothers that leave in the night to get their fix whilst their child is at home. Not intended to be shocking, it’s a story that I wish was more eye-opening and intricate as only two verses from Journalist has the track finishing before it gets started. Monkadelic is behind “3 AM” as well as the plodding “United We Stand”, a Public Enemy-esque track to rally the troops to. But Monkadelic impresses most on “Urban Legend” utilising what can only be described as a perfect noise. Unsure on whether it’s a female voice that’s been chopped to pieces proclaiming “Wait”, Journalist uses the best beat on the album to brag alongside Stryfe. Lyrically the track is nothing special, but sometimes a track bangs so damn hard the lyrics just have to compliment it.

Whilst Journalist does touch upon social issues when “Reporting Live”, his best work involves him passionately sharing his thoughts over soulful, pounding production. “Gas Mask” set the bar high and even though “Reporting Live” is far from a sophomore slump, it is let down by some weak production and disappointing guest features. However, they are easy enough to ignore, and most of “Reporting Live” is strong, satisfying hip hop that deserves more coverage.