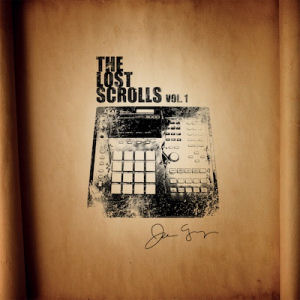 I’m torn. Every year around this time I reminisce over Dilla, given his life was snuffed too early in February of 2006. His ghost still manages to haunt hip-hop in a variety of ways, not the least of which being the cutting edge style of production which reinvented what we think of as rap music. That has also come at a price – Dilla’s catalogue being more celebrated after his death than it was in life. At some point “celebration” becomes hard to distinguish from “exploitation,” so I was happy to hear that long-time friend Frank Nitt and Yancey’s own mother were behind this new series of “Lost Scrolls.” I’m a little more comfortable with his catalogue being extended by his own family than by record labels who have a much less personal connection to him. That’s not to say there aren’t worthwhile and heartfelt Dilla tributes from within the hip-hop community, but if anybody’s going to dust off the unreleased Dilla material and put it out to the masses, it should be Mrs. Yancey and friends.

That said I do actually have a few reservations about “Lost Scrolls,” given that “Vol. 1″ indicates an open-ended and possibly perpetual series of Dilla 10” records and digital EP’s. The short length of “Vol. 1” only increases those concerns given that the A-side and B-side combined are 8:20 in length. If one is being entirely fair Dilla was always a master of making short but sweet statements both as a producer and lyricist, resulting in albums like “Donuts” where the majority of the tracks clocked in under 2 minutes. The flipside of that argument is that if Dilla has so many short unreleased tracks, there’s no reason not to put 6 on an EP or single as opposed to 4. Even 12 minutes could be squeezed into a 10 inch with no appreciable loss in bandwidth – in fact given it’s nearly the size of a 12 inch you could do far more than that. In digital format there’s no loss in quality – there’s certainly no reason not to do it there.

The most enjoyable thing about this EP may be the opening Dilla freestyle “Smack a Bitch,” which is Jay Dee purposefully doing a riff on the Eric B. & Rakim classic “Eric B. Is President

.” It’s exactly the kind of thing I want Nitty and Mrs. Yancey to unearth from his unreleased gems – Dilla just goofing around and having fun over his own beats. It’s the kind of thing any true head schooled in the 1980’s classics who could produce his own beats might do, and as someone born the same year as Yancey, this track is right up my alley.

“Yo, I came in a whore, I’ve said it before
I never let a bitch hypnotize me no more
The whole – bitin me, fightin me, invitin me to fuck
I can’t hold it back, I’m lookin for a nut
Took off my Girbauds, dick in her throat
That ass I’ll be hittin it until she hit a high note
Let off, many seeds, all kind of ideas
Fuckin a bitch, seems like the shit took years to hear
Still hittin bitches after the next one
Jay ain’t never scared, I’ll make the best cum
And you know that I be bonin chicks
Jay Dee known to smack a bitch”

To the uninformed that might come across incredibly misogynistic, but if you read the flow as rewording Rakim’s, it’s a clever and light-hearted riff on a hip-hop classic. There’s nothing on “Lost Scrolls Vol. 1” that isn’t equally enjoyable though – the bopping “Dewitt to Do It,” the EP’s most complete song “The Throwaway” with Frank Nitt and Dilla’s brother Illa J, and the ethereal closing instro-rap “Ruff and Rugged.” Unfortunately much like J Dilla’s life, the whole thing comes to an end way too soon. I have mixed feelings about this series that haven’t gone away since I started writing it, and have only been amplified by repeat listenings to the EP. I think the heart of everyone involved is in the right place, but at the end of the day money still changes hands, and I’d be lying if I said I didn’t think I was done buying posthumous releases a few years ago. 4 songs at a pop there could be 10, 20 or more “Lost Scrolls” which while certainly a worthwhile tribute to his artistic legacy would also be fairly expensive to obtain.

Basically I’m at a selfish “all or none” point in my long love-affair J Dilla. God bless the dead but let the dead get some rest. I’d rather Dilla’s family and friends unloaded every last unreleased Dilla track at once instead of stringing us on for years to come, but that’s my own selfish feelings. Musically this is a fine EP. A very short EP, but a very enjoyable one.