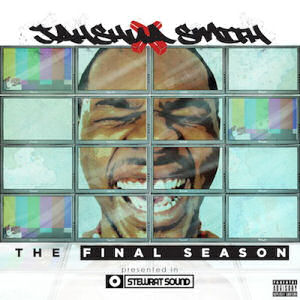 Late last week nerdy TV lovers mourned the demise of critically adored yet under-appreciated sitcom 30 Rock. Like the Emmy-toting NBC show, Detroit rapper Jahshua Smith’s “Final Season” was its seventh. No, Smith isn’t a Tina Fey-type character on a sitcom, but his StewRat-produced debut album uses an extended metaphor, plotting his seven-year journey with his crew the BLAT! Pack as a television series, using skits, not unlike Little Brother’s 2005 classic “The Minstrel Show,” to piece together a loose narrative.

Smith is one of many talented up-and-comers from the Detroit scene that heads should keep an eye on. With a distinctive voice, sharp flows and potent lyrics, he has all the makings of a great emcee. “The Final Season” has a perfect blend of introspective, dark and sometimes political raps, and some less serious, fun tracks. After the album’s flawless intro “Seven-Year Itch,” which brings listeners up to speed on Smith’s career and mission as an emcee, he takes a dark turn with “The Ghost of Medgar Evers.” “Evers” is one of StewRat’s darker productions on the record with swooping synthesizers and Smith recites some “Life After Death”-era Biggie lyrics. One of the more charming moments of “The Final Season” is at the end of “Evers” where the show’s writers complain about starting the album off on such a dark note. They ask Smith to make something for the ladies, and he responds begrudgingly with “Butt/ Don’t Hold Back.” “Butt” may be Smith pandering to women to boost his fictional show’s ratings, but the track is both clever and a banger that appeals to mainstream crowds.

Jahshua Smith’s best moments on “The Final Season” is when he tackles some more serious subject matter. He discussed gun control on “The Conversation” with lines like “if death is cancer, then the streets the tumor.” Smith finds himself getting political again on lead single “-CENSORED-.” And BLAT! Pack crewmates Red Pill and Jae Musick join Smith for “Changes,” where the three talk about betrayal over StewRat’s most eerie beat with a haunting vocal sample on the hook. But these dark moments are nicely balanced out with lighter tracks like the bouncy “Ride Tonight” and the clever braggadocio of “Off the Couch” and “Carry On/ The Ark.”

Along with Red Pill & Hir-O’s “The Kick,” Jahshua Smith and the BLAT! Pack are responsible with two of 2013’s best and most exciting albums. While 30 Rock’s final season marks the end of an era of phenomenal television, Smith’s “Final Season” marks the exciting start of a new era of great Detroit hip hop.