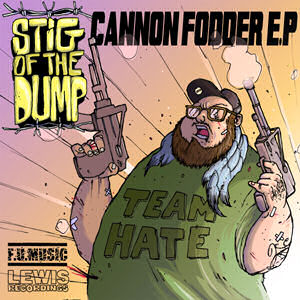 Not long ago I covered the album of a British rap artist who hoped to pepper his proven electro rap concoction with some rock ingredients. The result had little to do with rap or rock. You see, like blues and jazz rock and rap music are not merely a matter of instrumentation and vocal technique. Rock ‘n roll is an attitude. Hip-Hop is an attitude. And occasionally these attitudes are one and the same, enabling the two genres to morph into one, sometimes right there on the spot, the studio, the stage, etc., sometimes more in theory when congruences emerge across the history of popular music.

Not to worry, Stig of the Dump is not some arranged rap/rock marriage, Stig is a legit MC, a bullheaded, bearded and bespectacled rhyming wrecking ball. The Newcastle native has extensive battling credentials and a couple of shorter releases under his belt, the “Cannon Fodder EP” being his latest. It’s a brief but intense trip into a sharp maverick mind expressing itself with ravenous flows and sardonic lyrics over booming tracks. Production is provided exclusively by Pete Cannon, an Englishman grounded in traditional hip-hop himself.

There are five tracks, “One” naturally coming first. It’s about Stig’s girl problems, who unfold slowly but surely, as if told by a mean-spirited Biz Markie:

“The last lass I had, things started out casually
The type of girl that I would hang around happily
I became attached to her ever so gradually
Then naturally – it turned into a fuckin’ shit factory”

While “One” samples a ’60s pop tune to good effect, the rest of the EP goes harder. Again the exact orchestration doesn’t matter that much, it’s the overall impact the tracks have as Stig projects his precise commands over them. On “Hard Work” he demands hard currency as well as due respect for his efforts with respective analogies like “Grindin’ like a cokehead’s teeth” and “I want ’em studyin’ my quotes like Plato’s.” “Official” lives up to its name with furious performances from the rapper and his producer as they steamroll over competition. “Head Banger Boogie” is more measured and at the same time the most recognizably rock ‘n roll track on “Cannon Fodder,” a fact also recognized by the video.

The EP concludes with “They,” a final affirmation of Stig of the Dump’s adamant position:

“As far as I’m concerned the whole world can die twice
Leave me the fuck alone so I can write rhymes
We won’t ever see no justice in our lifetimes
They keep on gettin’ richer while we struggle by the sidelines
Nine times out of ten they create the zeitgeist
The whole world somehow convinced that they have like minds
But great minds don’t think alike, they think differently
See that’s why public opinion ain’t shit to me
I’ll never fall down, I’m all out for victory
Only those who win the war get to write the history
I march to a different beat, till I got blistered feet
It’s not a metaphor, I mean it literally
An individual is somethin’ I insist to be
I put the real me in every single little bit of speech
Inner visions got me switchin’ to a vicious beast
Walkin’ the British streets, talkin’ through gritted teeth”

Stig’s latest track, the exclusive “The Truth Is…” sees him take his fervor to even greater heights. What Stig of the Dump does isn’t exactly new, it’s raw and rugged rap that has existed since the late ’80s (particularly in the United Kingdom) and continues to be in circulation (for example in Australia). What elevates him beyond many similar figures and puts him in a class with heavyweights such as Big Pun, Ill Bill and RA the Rugged Man is the meticulous writing and recitation. Some say hip-hop is dead, others continue to breathe life into it even beyond their own very last breath: “I give a fuck if it’s dead or not / I’ll be hip-hop till my body gets left to rot / till the flowers grow wild on my grave, till they wither in the winter and the very last petal drops.”