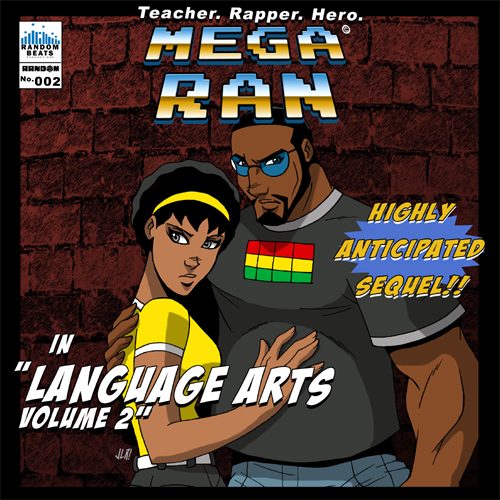 Sandwiched between “Volume 1” and “Volume 3” comes “Language Arts Volume 2,” an album whose omission would be a curious oversight in the RapReviews catalogue. The timing of reviewing it when it came out almost six months ago just didn’t work out for many reasons – and one of them was that with so many albums already on my plate I avoided the one I had an inherent bias for. After all I directly supported Random on promoting the project through YouTube – so I had every reason to think my review might not be the fairest. Now that enough time has gone by that my promo video’s commercial value has faded, there’s no reason to leave this gap for metaphoric game players to jump over – we can bridge the beginning to the end.

“Volume 2” smartly address some of the concerns I had on the previous iteration (well aside from my own bias) by deepening the pool of material. Though the 10 tracks go by fairly quickly at just under 33 minutes, the plethora of guest rappers make this one feel like more of a full length album. MC Lars guest stars on the duet “Me & The Mouse,” poet du jour Wordsworth joins in for “On the Line” and the biggest surprise of all is long-time Little Brother affiliate Chaundon on the song “Better Off” – Raheem Jarbo’s ode to being single. Though he professes that it’s better than a relationship, Chaundon offers a little helpful perspective:

“Hey fool – you better get right wit’cha girl!
She’s the best thing that ever HAPPENED to you in this world
She cook and she clean; she finer than a mother son
Better go and patch it up before she find another one
Set your pride aside – go apologize
Tell her somethin that’ll make her melt like Haagen-Dazs
Put your rap book down and get your girl back
before you find yourself by yourself with a backpack”

For those who haven’t been following the story so far, Random is portraying a Teacher/Rapper/Hero whose students have been brainwashed by an immersive video game where they walk around in a zombie state – unaware of the evil that they may do. Not only is it affecting him personally to see them get dragged into evil, it’s affecting him professionally as his failing students could lead to him getting fired. Though he dreams of being an emcee on the side, the protagonist of our story still needs his job to pay the bills. All of this is artfully tired together by the music on the albums, the digital comic books packaged with them, and the Language Arts video game you can play online. The female woes of “Volume 2” are just another in the many interwoven story arcs that occur throughout this 3 volume saga. It was all good a week ago on “Hip-Hop Chick” but nothing worth having in Random’s world (virtual or IRL) comes without drama.

So what’s the grand conclusion here? “Volume 2” may be my favorite out of the bunch. It’s hard to go wrong really when you have cameos like Homeboy Sandman on “Faculty Lounge” or MeLa Machinko on “To.Get.Her,” but more than that this edition feels the most like a complete standalone album out of any of the three volumes. Of course Ran had his own answer to that problem – he repackaged them together as one group at a lower price – but if you were buying these individually then or even now the best bang for your buck can be found right here.