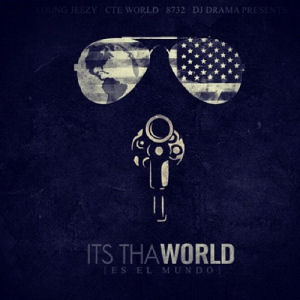 It is perhaps both compliment and condemnation to say I can hear Young Jeezy’s voice in my head just from reading the song titles of “Its Tha World.” In fact I nearly had the chorus of “Damn Liar” figured out in my head before playing the song, other than that I gave Young Jeezy too much credit – I figured he’d throw in a “I’m hotter than fire/Say you like me, youse a God damn liar” somewhere. Jeezy chose to keep it extra simple though and only rhyme “liar” with “liar.” Extra simple may also be why he left the punctuation out of the title of his album. He could have tried to argue it was a possessive were it not for the fact he translated it to “Es El Mundo” underneath, proving that “Its” should have been a contraction for “It IS The World” – but it is what “it is” though so let’s move on.

Jeezy gets away with a lot more than grammatical mistakes over the course of a typical album, due largely to the charismatic way he delivers his vocals and the producers he chooses to work with. Going as far back as 2005 I’ve felt his lyricism was a bit suspect, but it’s hard to deny that Jeezy has a dedicated cult following, one so large that giving away a Jeezy album free on DatPiff is more of a surprise than anything you’ll find on it. Both the topic matter and delivery of these songs is Young Jeezy cliches personified – being real, moving bricks, eating well, living good, destroying his rivals, trusting not a soul. The D Rich produced “How It Feel” nearly covers all of these in one shot:

“Got the water in the yola now I’m in the mix
Gon’ do what it do and them some dirty bricks
It’s a dirty world, but my car clean
Pull up in them matchin Chargers, we the car team
Now it’s shrimp and lobster, like we in the mall
Last suit I had, gave that boy a job
30 niggaz with me lookin like they fin’ to rob
Don’t make me grab that black steel, my black card
And it’s mine too, nigga got my name on it
Knowin that niggaz probably got some ‘caine on it
What that hood nigga doing with them white folks?
Tell them block blow they think I’m tellin white jokes
They was pocket watchin on the front porch bitch
And you know they watchin, now I made the Forbes list”

Young Jeezy gets credit for a few things on this hour long release – the first of which is the DJ Mustard produced “R.I.P.” featuring 2 Chainz. It’s got the heavy bass bottom which can help you get past forgettable bragging, but he did get my attention with the lines “Who the nigga think he is, Slick Rick or Dana Dane?/Think he Rakim or some’n, look at his chain.” Speaking of Mustard on the beat, E-40 makes a cameo on “All the Same.” It shouldn’t be this obvious which two songs are the best tracks on “Its Tha World” but once again it is what “it is.” There are some otherwise decent songs though. “Get Right” would be even better without all the DJ Drama shoutouts – Black Metaphor creates the kind of menacing piano background that suits Jeezy best. Mike Will also makes a hot one for “Tonight” featuring Trey Songz, which will probably be a crossover song once some crassness gets censored.

“I be like any faster, she be like any slower
So we meet in the middle, yeah you know how that go
She said ‘Baby I’m ready’; I said ‘Baby I know’
Then I asked ‘Is it mine?’ She said ‘Baby for sho’
She like the way I grind, you know she love my fresh
She said she feel it in her chest, I’m the fuckin best
Ha? I said ‘Well fuck it I’m the best then’
Them busters out your phone baby, fuck the rest then
Ye it’s gotta be the best if we blazin
Give her dat good D like the Ravens
Make you wanna step back and just take your time
If I ain’t told you today girl, God damn you’re fine”

I wish it was easier to draw a conclusion about a Young Jeezy album than it is. The more I listen to him over the years the less impressed I am with how basic his rhyme schemes are, and just throwing in a few old school references may catch my attention now and then, but it doesn’t make up for a lack of depth. Even his relationships with women when he writes odes to them are incredibly shallow – he’s no more committed to a woman than the amount she’s willing to praise his dick game and give good brain. Fortunately for Jeezy life never required him to be profound, to having meaningful relationships, or to be a good role model to the youth of the world. Of Jeezy you can say this much – he’s not excessively vulgar when the context doesn’t call for it, he follows the drug dealer code of ethics more rigidly than most actual street pharmicists, and he knows how to lay down his Southern drawl over a good beat in a hypnotizing way. What “Its Tha World” lacks in punctuation or values, its still got in entertainment.