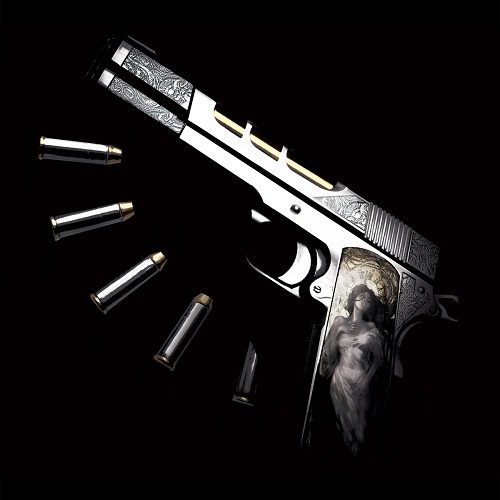 Parallel Thought is so quiet as kept that it’s actually become a marketing point on the cover of his new “Artillery Splurgin'” CD – an attached sticker quotes Spin Magazine as saying he’s “One of rap’s most slept on.” Thankfully no pillows are necessary at RapReviews – we’ve been pointing out how dope his work is for years. His beats are behind some of the most remarkable albums that I’ve listened to – the Del the Funky Hompsapien and Tame One collabo’ “Parallel Uni-Verses” for one and reuniting with the Funky One for “Attractive Sin” for another. P Thought exists in that margin between celebrating hip-hop’s roots and completely throwing out the rulebook on what rap music can or should sound like. Putting his name on a project is reason enough for me to pay attention, regardless of who he collaborates with.

For those who missed the Bandcamp release of “A Ride With the Southern Child,” the impending physical release of “Artillery Splurgin'” in May 2013 may be something of a surprise. Getting this early copy by post confirmed two things to me though: P knows we’re not sleeping, and P knows we’re not leaking. People who thought Parallel only worked with famed hip-hop lyrical pugilists got their rude awakening with Gene, an Alabama rapper hailing from the same hometown as the legendary “Father of Blues” W.C. Handy. The warm and inviting sound of the combination was like a tumbler of Southern Comfort over ice – slow and sweet for the sipping. It’s like hearing DJ Premier produce a track for Bun B – making the mood match the style of the emcee instead of making the emcee try to be something he’s not. It’s a free download, and since you have to wait a couple months for “Artillery Splurgin'” anyway, you might as well grab it now and savor the flavor while you wait for this CD.

In the meantime I’m in the enviable position of having this retail release, although I’m setting myself up for headaches by telling you how good it is. Gene the Southern Child uses his Alabama drawl to its full effect, providing a charisma to his flow that words alone just won’t. In fact on songs like the horny horn, quiet storm cloud nine of “Roll,” it’s less about what he says than how he says it. That may not be a ringing endorsement of his lyricism, but having a naturally pimpin’ vocal tone has certainly served the likes of Snoop Dogg and Gene’s unadulterated “real talk” is authentic because he says more by speaking quietly and deliberately than by bragging or yelling:

“You thought you had me dead square, but you was much too late
And talk about me real bad when I’m not in the place
’til I’m two seconds from they face, askin ‘Now what you seen?’
Funny how niggaz claim they down and you they partner they reppin
but you really see how they bein when they ass get arrested
This shit’s pathetic – I never ever thought that you’d play me
All the favors I did for you and this is how you repay me?
Hopefully maybe, that you young niggaz take it from me
that motherfuckers can’t kick it G, with a deal to get free”

Gene leaves reinventing the wheel to Parallel Thought, and sticks to laying down the G code, the rules of the game anybody who lives just outside the law needs to follow. Gene doesn’t go out of his way to lay down said law, but as “Wanna War” suggests, he won’t be pushed around either – and he can spit just as fast as Twista when the moment comes (appropriately he’s sampled at the song’s end). Those who don’t heed his lessons wind up as a “Homicide Victim,” but even as Gene is issuing warnings like “tryin’ to fuck with me, you must be on yo’ last brain cell” he does so in a level and calm demeanor that’s immediately appealing.

Gene the Southern Child’s flow is melodic and hypnotic, and P Thought keeps matching beats to his rhymes in ideal ways. The layered instrumental of “Never Been” is like an unsung harmony over a pulsing bass. “Still iLL” is ostensibly a menacing message of “making a nigga black out, come to your spot, and put the motherfuckin snub nose to your knot” yet the whistling musical backdrop rolls along like a breeze through Alabama trees. It’s hard to not want to sip a mint julep listening to songs like the title track of “Artillery Splurgin’.” No matter how much violence Gene puts into his rhymes, he’s so cool calm and collected, you’d think he was reading bedtimes stories to children. It might sound odd to read that in print, but paired with P Thought’s beats, it just sounds SO SWEET. This is a can’t miss album.