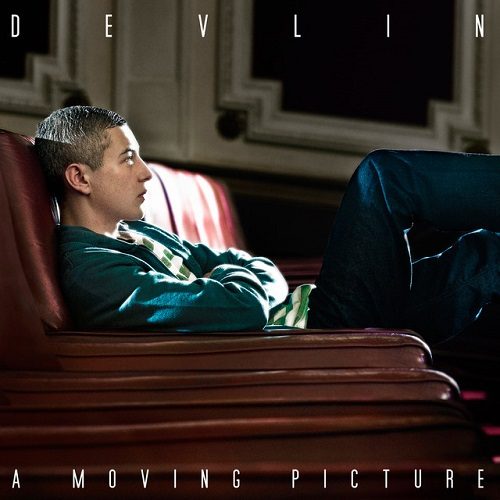 As a British fan of hip hop, Devlin has surprisingly crept under my rap-radar. Associated with breakthrough Grime emcee Wretch 32, it’s easy to see why. Grime has never been my cup of tea, with its intimidating pace and often vicious themes of gangs and criminal activity, it has always lacked the maturity that UK Hip Hop demonstrated through artists such as Task Force and Klashnekoff. Ever since Professor Green crossed over from cocky battle rapper to chart-topper, he has been followed by Giggs, Plan B and the aforementioned Wretch 32. Whilst Plan B operated on a more artistic level, applying words in place of actions, the likes of Giggs, Wretch and Professor Green relied heavily on singers to gain that desired fanbase the British hip hop scene just doesn’t offer. Devlin doesn’t hide from his Grime roots, rapping with a stop-start flow reminiscent of an asthmatic Kyza. This style of delivery is nothing new to hip hop, a ton of emcees from Skriblah to Jibberish have demonstrated its effectiveness when applied with a British accent over kicks and snares. Devlin has a solid enough voice for spitting (imagine a restrained Charlie Sloth – hard to, I know) but lyrically he still shows a lack of depth. “Sun Goes Down” is an underwhelming start with the ridiculous comparison of himself and Katy B to Jay-Z and Rihanna. It is the musical outcome of listening to Eminem’s “Recovery” one too many times. “A Gift & A Curse” exudes a more intense delivery from Devlin which actually combines with an epic, cinematic production to brilliant effect. Just as Devlin draws you in with his rhymes, the track cuts to Chasing Grace; the featured singer. It’s an issue I have with the majority of cross-over rappers in the UK, the inability to craft dope hip hop without an accessible hook. Thankfully there is some strong cypher-style lyricism evident on “Off With Their Heads” featuring a Drake-infused Wretch 32. Devlin is at his best atop violin-backed production as he delivers a relentless syllable-heavy verse paying homage to his grime roots:

“I’m getting flashbacks from the past
head full of hate and a mouth full of bars
me and Wretch just stretched this game ’til it expand
taking the extra yard, we’re going extra hard
no I cannot be barred
say what you want but you couldn’t keep Devs out
anyways, I’ve already broke through the fence now
and I’m quite relentless when I vex out
everybody wants to be the next out
but he gets stripped like a bitch with their dress down
think you’re a face round here?
get left lying face down in the next town
pull strings like Robbie Lamont
on the beat and I’m dropping a bomb
I’ll make you all feel sick like Subo dropping her thong
this ain’t sumo but I’m too big and too strong”

It’s nothing more than a brag rap, but the tongue twisting delivery is where Devlin excels. Obviously you can take Devlin out of the dying Grime scene, but the Grime will forever be a part of Devlin. “Rewind” is Alyssa Reid’s “Alone Again” in knock-off form, which fails to spark interest due to Devlin’s simplistic vocabulary. “Watchtower” is another cover, this time featuring Ed Sheeran as they aim high and try to replicate the Bob Dylan classic. It’s clearly catered for maximum airplay on daytime radio, but again the stop-start delivery and poorly written lyrics demonstrate Devlin’s limited ability.

“A Moving Picture” feels like the male equivalent of Tulisa’s “The Female Boss” album released last year; a record that wants to appear more friendly to mainstream audiences but tries to maintain what originally made that artist popular. Whilst Tulisa failed miserably by marketing herself as “urban” yet released dance singles to promote it, Devlin has a reputation as a respected Grime artist with a penchant for quick battle lyrics. Amalgamating these with pop choruses makes the listening experience too scattered and ultimately leads “A Moving Picture” to stutter from frame to frame, and it doesn’t help that the experience bows down to every chart formula around.