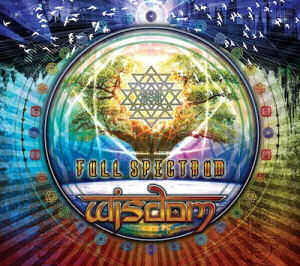 If you’re not interested in a quick overview of Hindu religious figures, it would be best to skip ahead to the third paragraph. For me the subject can’t be avoided. It’s not just because Wisdom adorns the cover of “Full Spectrum” with religious and mystical symbolism, but because he goes to great lengths to devote the inner gatefold of his CD to “my beloved teacher Sai Maa Lakshmi Devi” – both the left and right side offer her praise. Poking around online reveals Sai Maa is a devotee of Sathya Sai Baba, who in turn claimed to be the reincarnation of the original Sai Baba of Shirdi. If you’re not familiar with Indian religious practices though these names mean nothing, and as I knew very little about them myself, I had to dig a little deeper and discover who these holy personages were.

Now to say that any of these three let alone Sai Maa could be summed up in one paragraph would be foolish. What can be said in fairness is that each of these people are venerated by their followers as an avatar, which from a strictly Hinduistic perspective means a deity/God who has descended to Earth to take human form. This is of course complicated by the fact that Hinduism has multiple deities – it’s not as simple as saying Jesus Christ was the son of God for example – a one to one holy relationship. For their adherents this hardly matters. Those who venerate these men and women often associate them with the same kind of miracles that one reads about in the Gospel – for example restoring the injured or incurably ill to full health. Naturally this has engendered controversy in many forms – challenges to prove their “miracles” scientifically for one, accusations of being “cult leaders” for another. The original Sai Baba of Shirdi gets the best rap of the three – probably because the internet wasn’t around in his time. His disciples are much more widely challenged. *

Northern California rapper Wisdom features several excerpts from Sai Maa on his “Full Spectrum” CD, in particular on the opening track and the second to last song. If you had to associate a sound with his rap style though, Tevya ‘Wisdom’ Jones would be closer to Rastafarianism than Hinduism. There’s a very clear “Chant Down Babylon” sound to both his delivery and the production, and it couldn’t be more clear from his singing on “Aye O” that he’s a fan of Carribean reggae superstars. It’s a fine line for Tevya – he could cross the line into “Ras Trent” levels of comedy – but to my ear he stays on the path of appreciation as opposed to shamelessly co-opting a culture not his own. This is solidified by him having Sizzla Kalonji on the track “This Is Life,” leaving little doubt that Wisdom pays homage to the pioneers in his own hip-hop stylee. He also pays homage to the elements of hip-hop on “Lyricism” while showcasing his own wordplay:

“Oh no, they let loose the lyrical linguist
Lyricist precision, lyricism I give ’em – as I
ride the rhythm and I give ’em the vision – I’m
shining bright like a light in a prism – they
run they mouth tryin to get people to doubt
But they really don’t know what they talkin about
I got skills razor sharp cause it’s up in my heart
Love for, hip-hop, man right from the start”

According to his press release Wisdom is on his third CD with “Full Spectrum,” and given the quality of music and lyrics found here it’s fairly clear he started from a solid foundation and built on it over time. As he puts it on “This Is” he’s something different in rap: “You feel the way that I’m blessing the mic/it’s unique, but it’s simply coming out just right/it’s an expanded, thought process to digest.” It is indeed, and there aren’t many rappers out there today who will drop references to Shiva and Albert Einstein back to back in their rhymes. Even though he gives all the credit and glory to Sai Maa, you’d figure he’d give it all to Jah listening to “Chatty Mouth” featuring Michael Rose, “Lift Up Your Head” or “Breathe.” His Jamaican influences are much stronger than his Indian ones, though it’s refreshing when he does allow the latter to come through on tracks like “Higher” and “Ode to Shiva.” As for Sai Maa, it’s up to the reader to decide if she’s a true avatar, or simply a David Koresh-like cult leader who has until now escaped a greater degree of scrutiny because she’s not well known. Wisdom is a talented enough artist/emcee that she may not stay under the radar for long.

* The author asserts that all information about these religious figures was obtained from public domain sources such as Wikipedia. No personal knowledge of the divinity of Sai Maa or lack thereof is to be inferred.