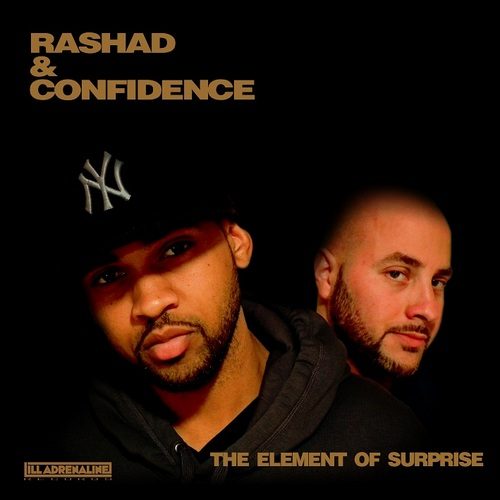 The Element of Surprise

Rashad & Confidence :: The Element of Surprise

Certain albums have that “classic feel” that is rarely replicated. “Illmatic” had it, “Hard To Earn” had it, and dare I say it “The Element of Surprise” has it. I’m not comparing this release from Rashad & Confidence with either of those acclaimed classics, but it certainly has the aura emanating from each track that suggests you are listening to the perfect marriage of raps and beats. Confidence has established himself as a talented beatsmith, delivering the strong “Purpose of Confidence” album with Tragic Allies emcee Purpose, which was one of 2012’s better produced records. Lyrically it was good but not great, and you can read my thoughts on it here. Fortunately, Confidence released an album a year earlier with an unknown MySpace artist named Rashad which went under pretty much everybody’s radar. Rashad has a Fashawn-like mastery of diction, words flowing effortlessly together that achieves a poetic aspect when matched with soulful production. It’s therefore strange that he hasn’t released anything since this record dropped in late 2011, particularly with lyrics as strong as these on “The Break Up Song”:

“It’s like every other day with you it’s conflict and strife
harsh words being said, a lot of quarrels and fights
all stemming from remarks in your subliminal comments
accusing me of what you did because it’s killing your conscience
who was I to think that could be the person to change you
knew that she was unfaithful by observing her behaviour
now she feeling guilty thinking I’m out returning the favour
looking to get revenge with chicks and purposefully betray her
you knew I was sincere ever since we shook hands and met
I couldn’t say the same for you because you had a damaged rep
and since we been together you still acting like you the bachelorette
thought I had my eyes closed but trust me yo, I haven’t slept”

“Brand New” sounds anything but, with a sublime production containing standard chopped samples and scratched hook so often found on Golden Era hip hop records from the days of yore. Confidence represents the throwback sound that producers such as Marco Polo and Apollo Brown use to great effect by combining it with crisp, current sounds. It’s about as hip hop as hip hop can sound, and although usually labelled as “underground” or “East Coast”, it is the style of production that is often timeless. Thankfully Rashad has a superb voice for rap, effortlessly flowing at a quick pace across the drums, weaving in and out of the samples comfortably. “Brand New” is a strong introduction, but “The City” embodies “classic feel” as good as anything. Rashad sounds like a hungry AZ in ’95, as he describes his favourite habitat atop a thumping, minimalist head-nodder:

“The streets got their mind help captive, it’s that simple
I can tell by looking at the bars attached to every window
soon as you feel the breeze from the city wind blow
it’s like you instantly motivated to go and get dough
that shits the rush that touches you once you dwell in these urban districts
the urge to earn figures at a very absurd percentage
whether suburban or urban you can observe the difference
but I preferred the place that gave birth to my existence”

Rashad is a humble emcee, confident in his abilities and instantly likeable. I’ve no idea how old he is but Rashad exudes a maturity and refreshing approach to sharing life stories not heard since Blu burst on to the scene with “Below The Heavens”. “Shining” is another reflective piece of rap as the listener is taken back to their late teens with the promise of women, money and careers. The track works so well due to the downbeat, almost depressing production being balanced by Rashad’s down-to-earth, upbeat message. “Days of My Youth” is a nostalgic trip to the early 90s with plenty of tales mentioning cassette tapes, Rap City and Angie Martinez. Lyrics like these often imply the record is aimed at people who can relate to them, which is anyone over 30. I’m 26 myself and find any mention of earlier hip hop fascinating. Rashad and Confidence are clearly influenced by Pete Rock & C.L. Smooth, Gang Starr and any other Golden Era hip hop icons. Many modern artists are turning to these often forgotten legends (see Joey Bada$$) to put their twist on a successful formula. The difference between paying homage and just producing dope hip hop is that “The Element of Surprise” could have been made in 1993, 1997, 2004, whenever! Regardless of when it was made, classic hip hop stays dope. “Pass Me By” is distinctly old school, with thumping drums and subtle horns interspersed with a sped-up vocal, as Rashad goes all C.L. on us describing missed opportunities such as beautiful women and easy money “slipping through his hands”. “They Keep Asking Me” is an infectiously catchy production that can only be described as awkward bus music. You know the type, headphones on, face screwed and head banging, ignorant of the fact you missed your stop. And the person opposite is laughing their ass off. “Understand” continues the social embarrassment, only aptly described as some next-level DJ Premier shit. Confidence has nailed the approach of less Is more, merging steady kicks and snares with the teasing chopped vocal, crazy string sample (think Masta Ace’s “Acknowledge”) and beautiful flip on the hook as Rashad attacks rappers who don’t understand hip hop. It would be easy to quote each verse from Rashad but we would be here all day. Instead, listen to a deceptively young rapper dropping gems for the rap fan of the modern era:

Malcolm X appears on “Rumors of War” as Rashad ponders the bigger picture. Telling youngsters to be intellects instead of chasing Benjamins is nothing new, but it is refreshing to hear it coming from a new artist who clearly grew up listening to Jeru and KRS, delivering it in a subdued manner many emcees tend to force down your throat. It also helps that Confidence has provided an ominous backdrop that sets the scene superbly. There is clear chemistry between the two which is something I couldn’t say for Confidence’s second collaboration album (with Purpose). This is bolstered by a distinct lack of any guest appearances, enabling Rashad to absorb the listener just as that upstart Nasir Jones did back in 1993. I know Nas had AZ appear on “Life’s A Bitch”, but when Rashad sounds like a combination of Nas AND AZ, it’s doubtful anyone could add something on the level Rashad maintains. The only track that could have used a guest is “Pen On Display” as other than some nice metaphors comparing lead from a pencil to that of a bullet, it’s your standard “brag about how great you are” song. That’s just me being finicky, as Confidence laces another banger utilising an ill guitar riff. In fact musically, “The Element of Surprise” is flawless. A bold statement I’m sure, and although I had heard a few tracks back in the fall of 2011, looking back 18 months later hasn’t hurt this album one bit. I’m confident this will go down as a modern classic, a piece of hip hop that will be appreciated for years to come.