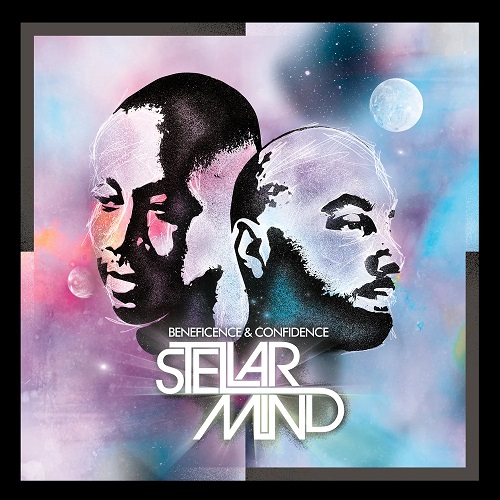 A number of producers are acting as catalysts to bring about new albums from MC’s. Producers being the driving force behind specific albums is nothing new, going back to – at least – the days of Hurby Azor, Kurtis Mantronik, KRS-One, Marley Marl and DJ Premier. These days, on-off producer/rapper collaborations pop up more frequently than ever, and to underline the enduring importance of the beatmaker, they often share the billing, for example Statik Selektah, 9th Wonder, Apollo Brown, Marco Polo, Bronze Nazareth, Metro Boomin, Zaytoven, Madlib, Kno, Nottz, Vanderslice, Stu Bangas, Kyo Itachi, Kenny Beats or Exile.

Confidence is building his own legacy of collaboration albums, continuing “The Element of Surprise” (2011, with Rashad), “The Purpose of Confidence”(2012, with Purpose) and “Confidence Presents GDot & Born” (2014) with “Stellar Mind”, a 16-track project with MC Beneficence, who already made himself familiar with Confidence beats on two previous albums of his. If we use the term ‘legacy’ here, it is not in a greater context because greater success has eluded these artists so far. This is about a personal legacy that hopes to positively affect a few others through one’s career. In Beneficence’s case, part of that mission was establishing Ill Adrenaline Records. Seven albums into his solo career, the label founder is certainly aware of his potential legacy as a hip-hop artist. “My legacy begins where your wack song ends”, he states plainly, referring in the next line to his broad palette: “Make joints for the streets or I can make minds bend, depends”.

At times, there are no bounds to Benef’s boasts. Yet interestingly, they often possess a communal undertone. When he says, “You are now tuned in to rap’s higher degree”, he establishes a circle of individuals who constitute and participate in rap’s higher degree (whatever you understand that to be). He spits “flows for all mankind”, declares “interviews declined till our poetry’s in a shrine” and deems it possible that he might “mess around and go gold from an organic street buzz”. In that regard, Beneficence is a welcome break from today’s pop and rap stars who make themselves dependent on their ‘fans’ and ‘followers’.

“The body of work we left behind is iconic” may sound preposterous coming from an anonymous rap race contestant such as Beneficence, until you realize he’s talking about his generation and kindred spirits. Maybe he’s reaching when he does so during a duet with Def Squad’s Keith Murray called “Illest Mic Pros”, but he definitely presents himself as a product of a certain period, remembering doing “chores bumpin’ Divine Force ‘Holy War'” alongside A.G. on “To the People”. Their individual discographies may not mark them as immediate peers, but when A.G. ponders the impression Rakim made on him while Beneficence talks about being “influenced at a time when they said it wouldn’t last / Pops showed me the article when Scott La Rock passed”, they both refer to the same specific point in hip-hop (the second half of the ’80s).

Collaborations are crucial to the artistic universe that Beneficence inhabits. He’s got El Da Sensei on “Jerz to the Jugular” and Chubb Rock on “718”, mirroring his equal dedication to the Newark Bricks and the Brooklyn brownstones. He takes us back to Hillside, NJ (bringing up a “four-song demo” he once recorded with the Artifacts’ late DJ Kaos) before Craig G revisits his famed Bridge on “Memories”. And he engages in a what-if scenario with Masta Ace and Phantasm (still representing Cella Dwellas) on “My Way”. Perhaps acting as label head as much as artist, he also enlists veterans who had a brush with mainstream fame, resulting in two of the album’s more belligerent tracks, “Won’t Miss It” with Lord Tariq and “We Major” with Ali Vegas. As always these days, Ras Kass is also on here somewhere. No need to mention the grand finale with a quartet of Lyricist Lounge alumni.

If these names conjure up a certain sound, Confidence meets your expectations with an array of flavorful and soulful tracks. On a later-career Pete Rock vibe (but slightly more refined), “Hypnosis (Intro)” sets the tone with gently thumping drums, melodic flourishes and sparkling highlights. There’s the mid-aughts boom bap of “Jerz to the Jugular” (with a sublte nod to the Artifacts classic “C’mon With Da Git Down”), the nostalgic upbeat vibe of “Memories”, the rootsy, homely breakbeat motion of “To the People”, the epic stir of “Respect”, the foreboding haze of “We Major”, the romantic BK vibes of “718”. Confidence is a master of the right dosage, there’s never too much, never too little of any ingredient as he persistently goes for the desired vibe. Needless to say, if you like your rap music with plenty of choice vocal cuts, you’ve come to the right place.

As an MC, Beneficence can be commended for still sounding ready and focused after so many years in the game. He comes across like he’s never at a loss for raps and vocally fluctuates easily between deliberate and psyched. He keeps a level of lyrical abstraction, which however lacks the elegance of, say, Tribe or C.L. Smooth. He tends to jump from one thought to the next, presenting himself as a danger that never really materializes. The Beneficence of “Stellar Mind” hovers menacingly over his targets without ever swooping down for a kill.

But that is criticism graded by the object’s own higher aspirations. If we may attempt a definition, ‘higher degree’ rap music always distances itself from the rest to a certain extent. It is based and thrives on exceptionalism. In Beneficence’s words (from the song “Higher Degree”): “This ain’t no lean in a cup / It’s Iron Mikes’s uppercut / It’s for intelligent thinkers who fight against the corrupt”. Take “Mind Over Matter” – its cold, clear atmosphere like an early morning in fall the perfect backdrop for a rapper to get those things off his chest, eschewing the urge to please everyone when he’s adressing the world. You just won’t get this kind of music anywhere else, including adjacent genres that grew out of rap.

Set on delivering a nutritious album packed with tracks that have a beginning, an end, and ample time in between, Benef lays down the law lyrically, from a street perspective (“Talked it cause I walked it / Seen the coroner chalk it”), from that of a business owner (“Sign the coldest acts with no hestitation / Ain’t no copycats or clones, get your own innovation”) and from someone who shares different perspectives: “I watched the swingin’ pendulum of good and evil / Learned my wisdom from the Imams [while] crack dealers my people”.

A longing for simpler times and more sophisticated rhymes and beats should not tempt us to overrate average hip-hop music. But if we say the album’s lone conceptual effort “Traveling Man” is the only time “Stellar Minds” rises above average, we ignore Beneficence & Confidence’s utter dedication to the craft.