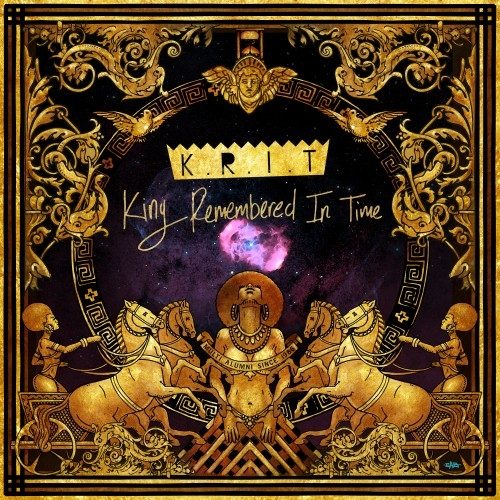 Chamillionaire once said “My fanbase is a cult” and there was evidence of that all around the internet. Message boards were dominated by stickied threads, people had Color Changin Click lizard-shaped haircuts and some even dared to get tattoos. It’s been a good eight or nine years since then and now there are plenty more rappers with cult-like followings, Meridian, Mississippi’s Big K.R.I.T. is among them. Over the past decade or so, the route to stardom has been to build a buzz through mixtapes, secure a deal, drop more tapes and then release a major label debut. Big K.R.I.T. did that starting with his “See Me On Top” mixtape series. In 2010, he made noise with his K.R.I.T. Wuz Here” project which earned him his Def Jam deal. The debut album was delay several times, but in the interim K.R.I.T. managed to bless his fans with “Returnof4eva” and “4evaNaDay” before the official release of “Live From The Underground.” “LFU,” as K.R.I.T. affectionately calls it, was met with relatively positive reviews and debuted at number five on the charts, but some still felt it paled in comparison to the projects K.R.I.T. had released for free. After laying low for awhile, K.R.I.T. re-emerged with an endorsement from his favorite libation, Crown Royal and a new track entitled “Shine On.” Just last week Krizzle held a Ustream chat with his fans answering questions and playing songs from the latest project, “King Remembered In Time.” It wasn’t until the end of the chat when he announced the project would be available for download in less than a week. As par for the course, the mixtape is produced entirely by K.R.I.T. himself, save for one track produced by 9th Wonder. Guest appearances include the likes of Bun B, Ashton Jones, Future, Trinidad James, Wiz Khalifa, Smoke DZA, BJ the Chicago Kid and Big Sant.

An electric guitar wails and a baby is born as time starts ticking with “Purpose,” a testament to K.R.I.T.’s dedication to accomplishing the goals he has set for himself and in the process declaring what he has done so far is not a fluke. Bun B appears on the aforementioned “Shine On” with Young Krizzle looking “cleaner than a Baptist preacher…that used to pimp,” making the arguement that if God didn’t want him to shine he would never let him chop on blades. Fair assessment. “Talkin Bout Nothing” is stripped down to the bare essentials of a hypnotic loop, hand claps and occasional 808 kicks, with a slightly quicker flow to put any and all perpetrators in their place. Reminiscent of his past cuts like “Just Touched Down” and “I Got This,” the mixtape’s first high energy moment comes in the form of “King Without a Crown,” as K.R.I.T. raps:

“Sometimes all I need is bass and a little liquor to ease my mind a bit
Cause even when you polished, niggas won’t let you shine for shit
That pot to piss in turns into a house on a hill
I’m talkin’ two stories, no fabrication, that’s a true story for real
And ain’t no ghostwriter, my flow tighter than gorilla fists
Keep it poppin’ like hot grease, fry it up with yo catfish
[…]
Hoe what’s up, I got more to tell ya
Dreams are cheap, I got more to sell ya
Crush linen
Grain grippin’
Don’t touch my buttons, I hate it when a bitch get overzealous
So chill hoe, I got a point to prove, that’s the reason I rhyme for
Third coast, I put it down for
What’s a king without a crown hoe?”

As in the case with most Big K.R.I.T. releases, the subject matter tends to get heavier and deeper as the album progresses. “R.E.M.” and “Meditate” are just two examples of that. “R.E.M.” finds K.R.I.T. questioning his efforts on “Live From The Underground” and whether or not he should’ve taken the approach of writing about his own life, even going as far to say that he believes he failed his fans. Not by a long shot. “Meditate” begins with K.R.I.T. being introduced to a group that has all the makings of an Alcoholics Anonymous meeting. Moving further into the song, the bells resemble empty glasses and every so often you can hear a sound that vaguely resembles the pouring of the last few drops from a bottle of liquor. Vowing to tackle his problems when he gets home and admitting that he isn’t strong enough to stop, he just needs time to himself to meditate with his spiritual guide (in every sense of the word). K.R.I.T. also usually has a song or two up his sleeve for the ladies and here “Serve This Royalty” and “Good 2getha” are examples of that. The former is a mellow and jazzy invitation to submit to him in the most respectful of ways, while the latter is a bouncy, upbeat celebration of their union that sounds like the production of Curtis Mayfield on the soundtrack from he movie “Claudine.” Following a short snippet of a collaboration with Future, is the braggadocios, Trinidad James-featuring “My Trunk.” The electric guitar and bass form the perfect backdrop for Krizzle and Trinidad’s aggressive flows. “How U Luv That” is more of the same but swaps the sometimes heavy-tongued delivery of James for the booming voice of the underrated Big Sant. Mannie Fresh once quipped, “So what you got a Benz, I’m pushin’ a space shuttle,” and that’s the attitude that Smoke DZA, Wiz Khalifa and K.R.I.T. bring to the party on “Only One.”

The project circles back around to more serious topics with “Banana Clip Theory” and the Marvin Gaye-sampling “Life Is A Gamble.” Believing that toting a weapon as the only way to keep power within your grasp and to earn respect forms the basis of the “Banana Clip Theory.” In the end, it brings pain and misery to others and the real lesson to be learned here is that violence begets violence. The 9th Wonder-produced “Life Is A Gamble” features BJ the Chicago Kid on the hook as K.R.I.T. weaves gambling-related metaphors through his verses, as he raps:

“I roll the dice one time, for my folk that died off
Repped for the side they believed in, but that side lost
Let me toss a seven for the ones that won’t see tomorrow
Cash these chips in for some time, ain’t no need to borrow
Gunshots rang out, everybody hang out
Yellow tape parties, all over we sang out
I don’t like this feeling, ain’t nothin that appealing
Bout reminiscing…over you, my God
I couldn’t cry, because your mama couldn’t stop cryin’
And that’s hard, Lord I wish my folk would stop dyin’
But who am I to say it wasn’t your time to black out
You bet it all on the spot, I guess you crapped out
For the finer things, indeed we chase, we told you pace yourself
It’s funny how the things we love, can make us hate ourselves
Russian roulette table, I gotta bet safer
You gotta know when to fold your cards, when you ain’t able…
To reach up in that dash, when that jacker up and flash
That brass like ‘gimme all you got or that’s yo ass’
That’s all it ever took, the house got me shook
Cause ain’t no point spead, when God makin books”

Things start winding down with the spoken word piece “WTF” and “Bigger Picture.” The latter samples The Meters’ version of “Stormy.” John Legend’s “Save Room” features a sample from the Gabor Szabo rendition of the song. Similar to “Red Eye” from the “4evaNaDay” project, once again K.R.I.T. is in a situation where he finds himself trying to salvage a relationship. A predicament that many can undoubtedly relate to. The mixtape ends with “Multi Til The Sun Die” and it’s the perfect closer for both this project and future live shows as well. The song is triumphant, reflective and hopeful all in one fell swoop. It has an anthemic feel to it and doesn’t quite have the dark feel of “The Vent.” To many, “King Remembered In Time” will feel like the album that should’ve been on store shelves this past June…but it wasn’t. Sometimes it’s beneficial to go through periods of uncertainty to become better as a result of it. Perhaps if “Live From The Underground” fared better on the sales charts, K.R.I.T. would have become complacent and lazy, losing that desire to continue improving. This project has a tendency to grow on its listeners with repeated listens. It’s well produced and while there are a lot of features, you never forget that Big K.R.I.T. is the star here. That’s the way he would have it, after all his name stands for King Remembered In Time. If he continues to have solid outings such as this one, forgetting him will be a rather difficult task.