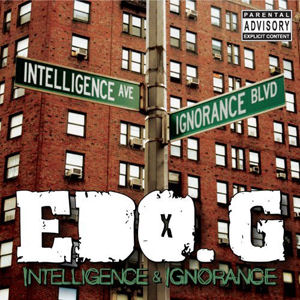 By fellow rapper Murs’ definition, Edo.G’s career has been a successful balancing act between intelligence and ignorance. Ostensibly the author of “Be a Father to Your Child” has largely operated on the side of intelligence, but if ‘ignorance’ in rap terminology can be translated to having a little fun, then there’s been some of that too. But as we all know, things are a little bit more complicated than that. Artists and audiences have at times taken sides for either ‘extreme’ in a bizarre but perhaps ultimately healthy debate that showed that no clear line can be drawn between these seeming opposites.

Inspired by his full-length collaboration with Masta Ace, “Arts & Entertainment” from four years ago, Edo promises to tackle another typical dichotomy that is essential to rap music with “Intelligence & Ignorance.” Now I might have some opinions of my own on the subject of ‘intelligence and ignorance,’ but I’d rather hear it from Edward Anderson, given that’s the name of his latest. The veteran rapper doesn’t oblige, at least not in the clear, straightforward manner I would like him to.

Which doesn’t come as that much of a surprise, since the Boston MC has a history of pregnant album titles that are not immediately related to the content – “The Truth Hurts,” “Wishful Thinking,” “My Own Worst Enemy,” and “A Face in the Crowd” come to mind. The problem in this particular case is that Edo’s style of writing is not fit for such a major discourse. At the beginning of his career he was able to argue a variety of issues in songs such as “Life of a Kid in the Ghetto,” “Dedicated to the Right Wingers” and the aforementioned “Be a Father to Your Child.” Over the years however his raps became gradually more succint and abstract, any train of thought often abandoned in favor of a witty line or rhyme. In fact modern day Edo.G can be a master of the short form beyond any #hashtag punchlines:

“Raised as a Humboldt Raider
Played the gun role, but the drum roll was greater
If you wack, don’t blame the haters
It’s like a chef makin’ a bad meal and blamin’ the waiter
You either dumb or just not knowin’
The key to jugglin isn’t catchin’, it’s throwin'”

But it’s gotten to a point where the validity of Edo’s songs is severely suffering. It doesn’t help that “Intelligence & Ignorance” opens with two tracks, “Done Talking” and “What They Say,” that don’t seem to rate verbosity too highly. Songs are regularly limited to two verses, have trivial titles, or no clear direction, and the entire thing clocks in at just over half an hour. But while his minimalist tendencies affect Edo.G’s higher ambitions, he’s still capable of recording worthwhile rap music.

He sounds as worldly-wise as ever when he flows to Oh No’s wondrous beat for “Done Talking” and refreshed over “What They Say”‘s slinky soul courtesy of main producer Microphono (of German production team 83 Sound), who also injects “Easy” and “Love I Need” with well-dosed soul, the latter a solid duet with Freestyle. “Power” could fit on any contemporary playlist with its sparkling synths and chopped vocal samples, while Edo’s performance as always is devoid of blarney and bullshit:

“I been smart, you been dumb – and then some
I turn outcome – into income
You lose some, you win some
I’m out to win, son, or to Windom
Head coach, you interim
Hey, you fillin’ in, Edo’s ill again
For them dividends, on my own like Gilligan
The ground I broke, dog, you just drillin’ in
This is hardcore rap, ain’t nothin’ feminine
Edo’s incredible
Your writing style unlegible
New England safety, James Ihedigbo
I never stepped foot on a pedestal
Blew once, second time inevitable
Caught the pain, fought the fame
This game’ll lend you an umbrella, take it back when it starts to rain
And I don’t floss for birds
Never at a loss for words
This, that and the third
Haven’t you heard, my verbs never slurred
Prefer to observe till money is transferred
You unheard, young bird
When beef gets stirred you get bullied like Yung Berg
I throw a new pitch, thugs do snitch
Gangster’s played out, smart’s the new rich”

Max Mostley (also of 83 Sound) may be co-defendant for the clichÃ© club song “Give it to Me,” but he can always refer to his expert orchestration of “Can’t Wait,” where Edo is ably assisted by crooner Noel Gourdin, who also blesses the following “Change,” another soulful tune, this time scored by Australian Cam Bluff. Come to think of it, if Edo.G had extended these two collaboration with Gourdin and perhaps even gave him co-billing, he’d not only have something of a novelty at his hands, the sharing of vocal and lyrical duties would vindicate his terseness. What’s more, with their social commentary, songs like “Hold U” or “Easy” would lend themselves to a project in the vein of John Legend’s and The Roots’ “Wake Up!” As it is, “Intelligence & Ignorance” fails to live up to its billing twicefold – both its lofty title and the artist’s reputation.