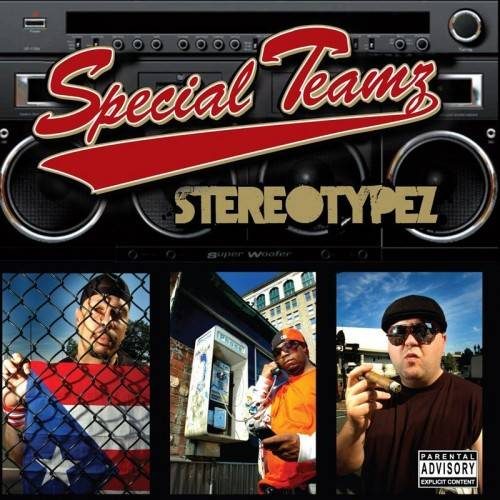 It isn’t often you hear a reference to Fenway Park’s left field wall, “The Green Monster,” in a hip-hop album. However, when listening to a collaboration of some of Boston’s finest emcees, it’s best to disregard some expectations. “Stereotypez,” the debut album from Special Teamz, announces itself boldly and refuses to be passed over as yet another underrated album from an underrated Boston hip-hop scene.

The title track best encapsulates the outlook and direction of Special Teamz. By ironically invoking almost every ethnic and racial slur one could imagine, the group is able to repudiate the type of narrow-minded attitudes that make this song necessary. Each of the members of the group, EDO. G, Jaysaun, and Slaine takes on several personae in the song and proves the ridiculousness of the stereotypes that, sadly, continue to find voice even today. The song succeeds in showing the destructive power of hate that manifests itself through these stereotypes.

“I hate niggas that talk crack
White boys that talk black
Dumb chickens that talk back
I hate gay fags
And Arabs that stay mad
Jihadists I hate rap artists
I hate the world, I’m about to go nuts
Foreigners servin’ my coffee at Dunkin’ Donuts
I hate Catholic preachers that wanna rape you
You hate me? I hate you!”

The emcees are at their lyrical peak when they are at their most political. One of the most prominent highlights, “Race Riot,” expounds on racial tension on the streets of Boston. The chorus pushes a mixed message:

The Good Will track, which sports blaring horns and an imploring vocal sample, boasts one of the most successful choruses on the album. Fortunately, most of the choruses utilize the time-tested vocal sample + scratch equation, and this seems to fit Special Teamz best. On “Fallen Angel,” though they abandon this technique. Despite several strong verses and a daunting beat from Jake One, the song is betrayed by its unfitting chorus. This is not the only time that experimentalism fails Special Teamz. On the final track, “Gun in My Hand,” which features Jamey Jasta of Hatebreed, the sound is too much oriented to the hard rock sound of the featured artist and not enough to the Boston hip-hop sound of the hosting artists.

These rare blemishes do not compromise the success of the album. This release marks Duck Down Records’ first excursion outside the world of Boot Camp Clik; however, the album still has that BCC sound. The lyrics, especially when socially or politically motivated, are fierce and unrelenting. The beats, with a few exceptions, are lively and even soulful as Sean Price spat on “Violent” from his 2007 album “Jesus Price Superstar”:

“The beat is smooth, the rap is hard
Just the way I like it bless the mic of the God”

“Stereotypez” follows this advice, as legends DJ Premier and Pete Rock each drop a track that does not disappoint, and little-known producer Young Cee chimes in with some quality joints of his own. And of course, EDO. G, Jaysaun, and Slaine certainly do sound godly on the mic â€“ or at least kingly, as on “Three Kingz”: