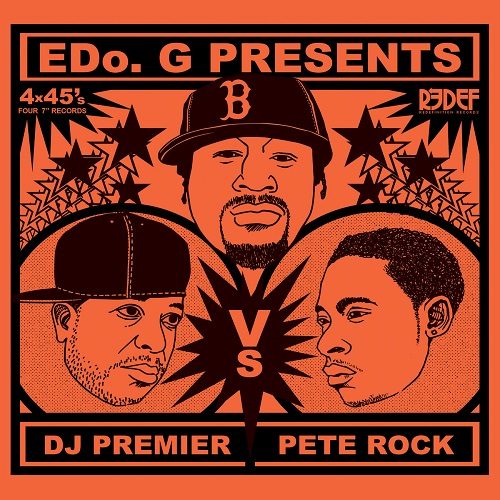 For a certain age group the names Pete Rock and DJ Premier represent the gold standard for hip-hop production. For them these two credits automatically upgrade any song no matter the year of origin. Like relatives who mean a little bit too well with their spouseless kin, they would consider these two producers a good catch for virtually any up-and-coming MC, regardless of personal inclinations. How any rapper could not be interested in working with the Soul Brother or Preem is beyond their scope.

However, as sure as the game remains the same, the names change as the sound of rap and hip-hop modifies constantly and what’s modern today can be moldy tomorrow. Only when they see themselves in a particular tradition, freshmen and veterans seem to be eager to work with either Primo or Pete. Among those were, in more recent times, Joey Bada$$, Hus Kingpin, Saigon, Termanology, Westside Gunn, or Jamo Gang. And while it took some years for the two names to come to symbolize said gold standard, there have actually been present-day albums by artists such as Apathy, Torae, Ill Bill, Kool G Rap & 38 Spesh, Ill Bill and The Lox that shopped beats from both simultaneously.

So yes, DJ Premier and Pete Rock are still called for and they do deliver. They to no small degree live off the reputation they earned when they were part of iconic hip-hop duos Gang Starr and Pete Rock & C.L. Smooth, but they actively work to keep their legacies alive. DJ Premier presently forms duo PRhyme with Royce Da 5’9″, while Pete Rock released “Don’t Smoke Rock” with Smoke DZA more than ten years after being co-billed on Edo.G’s “My Own Worst Enemy.” Now the Boston rap authority reminds us that he was loyal to the two producers across a time span of least 15 years with a release that is also a tongue-in-cheek nod to the tradition of historical showdown/soundclash albums and compilations.

Set up as a two-round match, “DJ Premier vs Pete Rock” pits four tracks against each other in both the vocal and the instrumental version. “The Truth Hurts” opener “Sayin’ Something” ranks relatively high in Edo’s discography. The rapper and the producer prove to be a natural match, their contributions interlocking easily, big-brotherly meditations dropping atop precise and prudential drum programming that lugs gritty instrumentation lifted from the vaults of soul and jazz. It is, for better or for worse, music that most people somewhat familiar with the matter would recognize as boom bap. In the song “Mostly Tha Voice,” Premier’s main MC Guru infamously downplayed the role of the music that supports rappers, but as a matter of fact his right-hand man behind the wheels of steel has specialized in beats that, to paraphrase Guru, get you up and make you buck. Premier has preserved a kinetic understanding of hip-hop. There’s always movement, never just mood, see the transition from intro to main track on “Sayin’ Something.”

Premier, perhaps more than any other individual producer, is responsible for what we sometimes close-mindedly call the ‘classic hip-hop sound’ – oblivious to the fact that what made the 1980s and ’90s so great was that stylistically they moved at such a fast pace. But around the year 2000 a sound had solidified on the East Coast that in certain circles persists to this day, of which ultimately all four tracks collected here are examples. Consider how Premier plays around with rock guitars at the beginning of “Fastlane” (2011), only to return to the tried and tested arrangement of bumpy drums and pleasant chimes and chords.

It’s a kind of matter-of-fact hip-hop, one that follows a pre-set track and doesn’t have to reinvent the wheel, that has earned the right to exist, not overly exploitative in regards to sampling sources, employing functional scratches to introduce vocal cuts from the rap library, etc. Musically (and often lyrically) self-referential hip-hop music, spiraling in an endless loop that has heads nodding literally and figuratively.

“If the opportunity was to present itself / I might just have to go and reinvent myself,” Edo begins “Sayin’ Something,” and until more recently it’s been a little bit frustrating to witness DJ Premier and Pete Rocks’s refusal to reinvent themselves. Add to that the fact that both men suddenly began to follow the same blueprint. PR’s “Situations” (also off “The Truth Hurts”) is only distinguishable by a less strict management of melodies, a more mellow sound and the producer’s adlibs. Speaking of, if he’s not the source, he’s sure responsible for the amateur humming that mars the chorus of “Make Music” (2014).

If you come to “DJ Premier vs Pete Rock” in the hope to get an answer to the question who wins, there are two possible answers: They both win because their names still ring bells, or neither one wins because they don’t live up to their names on this specific project. A different sample of their extensive work could very well yield a different result.