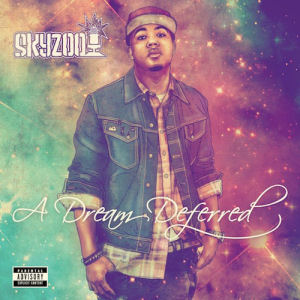 Over three years since “The Salvation” dropped, Skyzoo returns with “A Dream Deferred”. Illmind features heavily, having built a strong relationship with Sky over the past few years, most prominently on “Live From The Tape Deck” so it’s no surprise that he laces Skyzoo with a beautifully haunting production on “Dreams In A Basement”. Crashing snares and the presence of Jill Scott create an impressive aura that lends the track a classic feel, which Skyzoo uses to dreamily introduce the album. Oddly, it sounds like the last track of an LP rather than the first, but “Jansport Strings” wakes up any sleepers with a 9th Wonder horn extravaganza. Part ode to Chi-Ali and partly a childhood autobiographical piece, Skyzoo utilises his easy-on-the-ear delivery to reflect on what inspired him to start rapping.

Illmind shows just how ill his mind is with a ridiculously sick boom bap display that hasn’t been heard in years. “Pockets Full” is guaranteed to have your head nodding like a pigeon on crack, with a simple hook you’ll be humming for days. Freeway puts in a rapid-fire appearance so aggressive his voice starts creaking, but that’s the Freeway we know and love – rugged and raw. Illmind goes from musically ill to mentally ill on “Give It Up”, a mess of a track that tries to combine a dubstep sample with a traditional hip hop rhythm. Thankfully, “Glass Ceilings” is a better reflection of the chemistry that Skyzoo and Illmind possess, with Skyzoo sharing a thought provoking verse:

“All or nothing now, couple dreams in a duffle
Damier’s all around it, guess a dream might run you
And the run’s a 100 yarder, the dash mite barter
And you tryna shake a Dash like a Carter
I’m tryna play the back as a starter, the irony in that
Wanting all of it but wanting no part of the react
I react like, all we ever wanted was to be up
Nobody could guard us but regardless they should lead us?
Still playing ringer, told me chill while they king him
Background live or die, they can still raise a finger
Those around us can see the same tent
Windex the roof, it only makes sense”

The latter half of the album is just as good, with laid back vibes on “The Knowing” and “Drew & Derwin” lending the record a pop quality. Dreamy beats come courtesy of Focus (“Drew & Derwin”) and DJ Khalil, who shows just why we need another Self Scientific album. “The Rage of Roemello” sees Skyzoo break away from standard 16-bar verses with a hook and is probably the best performance. Lyrically Skyzoo has a knack for rhyming that appears to be unfocused and vague, yet when studied becomes clearer. There aren’t many emcees that improve lyrically when looking at their rhymes in text-form, but Skyzoo is definitely one. “The Cost of Sleep” is another fine example of Skyzoo’s ambiguity paying off, debating whether the cost of sleeping is greater than staying awake to be more productive, yet suffering in the long-term. It’s perhaps not the most exciting subject, but for an album full of similarly melancholic records, it is a perfect way to fall asleep with your headphones on.

“A Dream Deferred” is certainly geared towards rap fans that lie in bed with their headphones on. We’ve all been there, and Skyzoo has created an album that may not be the dream we all thought it could be, but it is one that will be playing in your mind long after you’ve nodded off. Don’t sleep on this one.