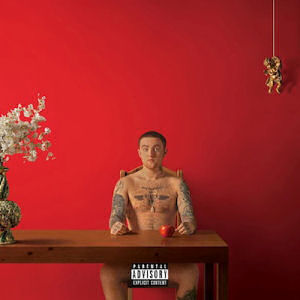 Mac Miller :: Watching Movies With the Sound Off

“And if God was a human it’d be yours truly
Watchin’ horror movies with some foreign groupies
thinkin’ this decor suits me; I do drugs to get more loopy
I’m in tune to ancient jiu-jitsu spirituals, it’s blissful
Looking out as far as eyes can see
I’m glad that me and this elevation could finally meet
I think I’m JFK’s final speech
They try assassinatin’ all of my beliefs”

That sounds like a well thought out statement of principle – except moments later on the same song (“The Star Room”) Malcolm McCormick brags that he’s “freebasin’ with freemasons.” It’s hard to know when to take Mac Miller seriously when his most successful album was a collection of songs about what the late great Biggie Smalls once called “Party & Bullshit.” One can certainly take his success seriously though. While other emcees flounder in the social media ocean Mac Miller hangs ten on the highest wave until he crashes into your eardrums. He said it himself on “Knock Knock” – “from the ground I build my own damn buzz.” He may look like he belongs on “Leave it to Beaver” but he’s eager to rap on your FM radio receiver – and songs like the Flying Lotus produced “S.D.S.” suggest he’s taking his hip-hop credibilty seriously.

“Came to raise limits, get higher than plane engines
They tryna change with us, but come to the same difference
Shut your pie-hole, I’m dope and I know
My voice sound like it was a sample off a vinyl
I don’t mind those hatin’ on my style
I tend to take the high road, get stoned and fly low
I’m no god, I don’t think that I’m a human, though cause I’m so odd
People sellin’ drugs cause they can’t find no job
Wonder if Christ made a million off selling the cross”

The surprising “S.D.S.” single sounds like a mixture of Odd Future and [adult swim] bumper music for all of the right reasons. In keeping with that youthful sound, most of Mac Miller’s collaborators are in his tech savvy demographic. Black Hippy crew members Ab-Soul and ScHoolboy Q appear on “Matches” and “Gees” respectively. The aforementioned Golf Wang show up too – Earl Swearshit on “I’m Not Real” and Tyler, the Creator on “O.K.” (a deluxe edition bonus track) – a song he also produced. Production is diverse as well, ranging from the mellow jazzy sound of Pharrell on “Objects in the Mirror” to the blunted violins of “Red Dot Music” courtesy Chuck Inglish – the latter featuring Action Bronson and Loaded Lux.

Bronson: “Understand I’m only rhyming for this son of mine
And so my daughter can be a lawyer and reap the spoils
We ate the tuna, it’s suede puma, my look is Jay Buhner
Dog it’s cause some of us just age sooner
I’m still twisted, rocking lizards from a strange river
Forbidden jungle in the joint paper, point shaver
Check the bio, I fixed the game between Kentucky and Miami of Ohio
I been wild”

It may be hard to take Mac Miller seriously at times, but it’s just as hard to dredge up any overwhemingly negative feelings about “Watching Movies” save for two – I could have done without the cover art (I know he’s being purposefully shocking but C’MON SON) and the deluxe edition is a little too much for me (over 70 minutes). It feels like there’s some filler material that could have been left on the cutting room floor that nobody would complain about – the drugged out sing-a-long “Youforia,” the stream of consciousness “Suplexes Inside of Complexes and Duplexes” (complete with in-track coughing) and the aptly named five minute long “Killin’ Time.” Here’s an interesting contradiction to consider though – even though most of Mac Miller’s topics are still juvenile, he has actually matured as an artist. His voice seems to have dropped a little bit too – maybe from age or maybe from the constant pressures of recording and touring. He’ll not be mistaken for Talib Kweli any time soon (perhaps ever) but there’s more to Mac than at first meets the eye.