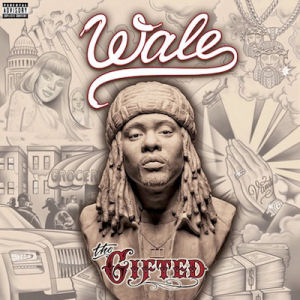 I know we tend to be self-referential on RR at times, but it’s almost impossible to review Wale’s “The Gifted” in a vacuum anyway. I would just as soonrefer to Jay Soul’s “Ambition” reviewas a starting point because it addresses my biggest concern about Wale as an artist – whether or not he’s “fast food rap” that is quick and enjoyable but lacks the minerals and vitamins, irons and the niacins to be good for you. The fact he had MexManny remix “Bad” and replace Tiara Thomas with Rihanna only increased those concerns. The original version was a charmingly rough song – a squeaking bed for a beat, Wale’s crass sexuality and odes to “oceans between legs,” and the husky voiced Thomas sounding just like a bad girlfriend you’d still want to take to bed after a fun night at the bar. The Rihanna remake tries to drown out the squeaking springs in the production, and it’s no longer a rough shot of whiskey – it’s now a froo froo drink.

More than most artists who have risen to prominence in the short time Wale did, the D.C. rapper seems intimately aware of the impossibility of pleasing everybody. He went from being Unsigned Hype in The Source to being a million dollar baller signed to Rick Ross’ imprint. The people who knew him when he was just the shorty who had (and lost) a college football scholarship liked when he was the local boy who made good, then hated him when he made it “too good” and no longer made amusing mixtapes inspired by Seinfeld. Jay-Z has had two decades to figure out how to walk the balance between being a superstar and still respected in the hood – Wale has had less than half that. “Ambition” was the growing pains in that process – it was his “Hard Knock Life.” That doesn’t forgive or excuse his choices in all cases, but it lends insight into why “LoveHate Thing” is a very personal single.

“Make a nigga wanna get the piece to get the peace
You gon’ need more than Wikipedia to get to me
PG to Mo County bet they all know ’bout me
Every hood, every ‘burb, I got superb balance
From the city that made me love you forever for it
Hope you celebrate every moment forever ignore it
You made me what I am, you made me what I am not
They gon’ love you a little different when you at the top”

And they gon’ love you even more different when you have the list of guest artists that Wale does on “The Gifted.” He’s not gone pop by accident in any way – every guest is a rapper who has crossed over onto radio themselves. In some cases it leads to odd combinations – Juicy J and Nicki Minaj are not well met on “Clappers,” and the lyrical difference between Wiz Khalifa and 2 Chainz is night and day on “Rotation.” On the other hand 2 Chainz makes anybody sound good by comparison, so every emcee on the song whose name starts with a W sounds like a rap genius. And though it’s popular to hate on Rick Ross for his credibility issues and his dietary problems, I’m in the minority that has no problem enjoying his personality and style even if it lacks substance. The Deputy and Corporal produced “Tired of Dreaming” featuring Ne-Yo and Rozay is pure fun, as is “Gullible” featuring Cee Lo. The latter also shows us that underground Wale people want so bad:

“What if they tell you this music was bogus?
The government run it, they controllin the culture
Would you believe that – if you read that?
What if they tell you the iPhone was tapped
They see all of your browser and know you viewin your apps
And Twitter and Instagram is really like middlemen
[..] Or when they said Obama wasn’t all real
He actually got a good-ass tan and a swag to appear black
Would you believe that? Niggaz impeached that”

Wale has seventy minutes to convince you one way or another of his intentions, and that’s just the regular album – there’s a deluxe version from Target that’s even longer. If Wale really does get anything wrong on “The Gifted” it’s overkill. When he claims he used Marvin Gaye for inspiration, you can actually hear it in songs like “Heaven’s Afternoon.” He’s aspiring to be more, so even though you may or may not be a Yo Gotti fan, you can still respect the Cardiak and No Credit production of “Bricks” and the fine line that Wale walks.

Instead of glorifying the drug trade as so many of the guests on his album tend to do on their own, Wale lays out a socioeconomic scenario and asks you to consider what you’d do under similar circumstances. I’m not saying Wale is Jay-Z yet – and it’s not certain he ever will be – because a Shawn Carter only comes along once in a generation. What I do see on “The Gifted” though is that potential, the same that The Source saw back in 2006, when he was a Nigerian-American shorty trying to make his way in a cold world and an overcrowded rap field. Through perseverance, hard work and just a little bit of luck he’s gone from the “Dig Dug” D.C. rapper to a household name, and as he grows into his newfound fame he proves that unlike his favorite TV show he’s not about “nothing” after all. He pretends to be fast food, but he’s actually good for you.