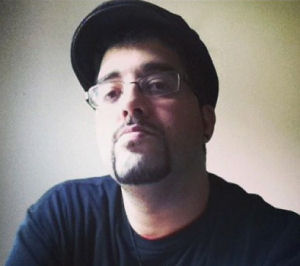 Over the course of his career, which has spanned over a dozen releases, Sketch Tha Cataclysm has had one simple, yet ultimately complicated, goal – never do the same thing twice.

“I gotta keep changing, and evolving, or I get bored as fuck,” the current Minnesota resident who was born and raised in Connecticut explains. “When I was about to put out my first album, Tao Te Ching, I had this feeling like ‘man, now everybody’s gonna think I’m THIS,’ and that’s my inspiration for every project, to kinda go ‘fuck, now everybody’s gonna think I’m THIS guy.’ I want to be the Mike Patton of emcees, like I don’t just do THIS thing, I do this thing, and this thing…”

Sketch admits that although his creative lust fulfills him artistically, it hasn’t always been the best choice business-wise. “I think that’s probably something that’s stifled my career,” he says, “because people that do a specific thing, that’s them, that’s their shit, and more people do that, they subtly evolve, and I want to do just completely different shit every single time.”

Listeners will have the chance to hear what Sketch has been working on starting tonight, as he and fellow emcee Botzy are kicking off their 12 city The Thrill Is Gone tour. As Sketch was preparing to hit the road, RapReviews caught up with him to find out more about the tour, and his next project. Sketch also revealed a few tour stories, including one involving swag murdering granola bars.

Adam Bernard: You are about to hit the road again for a tour, but you’ve been hitting the road in a different way, recently, bouncing back and forth from Connecticut to Minnesota. You’re from Connecticut, so your family and friends are there, but what has kept you coming back to Minnesota?

Sketch Tha Cataclysm: The music scene. There’s more opportunity, I would say, here for the genre of music that I do. Another reason is there are so many fucking rappers here. There are so many producers. They like breed dope producers here. It keeps you in a place where you have to be on your toes. You’re directly confronting some of the bigger touring acts of our genre on a semi-daily basis. I’ll give you a for instance. Yesterday I had to go to Botzy’s band rehearsal, and we had to wait for Sims and Astronautalis to finish their band rehearsal before that started. You’re directly confronted with that on a daily basis. I might see Brother Ali’s wife at the gas station.

AB: So you’re in a weird hip-hop nirvana.

STC: It’s not even that. When I was younger my ideal scenario, thinking about being a musician, was that I was just a regular ass dude just working as a musician, just being a regular person, and a lot of that here is literally that. Slug will just be hanging outside, or various Rhymesayers acts will be in the grocery store, or Laserbeak is out with his wife and kid, and you can ask people questions and they’ll usually answer. If you’re curious about how to handle a certain situation you might be able to go up to a guy who runs a record label, or some shit, and say, “hey man, what do you think I should do in this situation?” He might say, “I’m just trying to drink a beer,” but you still have the capability of asking that kind of thing. I think putting yourself in an environment where you have a direct evidence of success is always a good thing. Being around that energy makes you work harder.

AB: In what ways have you found yourself working harder?

STC: I’m trying a bit harder to monetize the situation. When I’m being confronted with a person like “today I have a video shoot, tomorrow I have an interview, and we’re putting out this album,” it keeps that reality in my brain, so I’ve been back to working harder on my next album, and the podcast is starting up finally in July.

AB: Which podcast is that?

STC: Conversations with the Cataclysm. It was originally a column I did for the Ant Farm Affiliates’ website where I’d interview a particular artist about the craft of, in that case, making hip-hop. In the future it’s probably going to be a lot more things. I interviewed Isaac Gale, who directed some of P.O.S.’ videos, about what it’s like to work on that stuff. I interviewed Seme Rock about beatboxing. I interviewed NASA about engineering. It’s somewhat technical, but mostly conversational.

AB: You interviewed me for that, didn’t you?

STC: Yes. I interviewed you for that. It’s a tighter format than what I was doing before. I had it very lengthly, and I think for the time being it’s gonna be cut down into shorter bursts. I liked the format, but until it feels a bit more comfortable I’m gonna keep it at a shorter length.

AB: The first album I heard from you was an EP, so I guess it makes sense your first podcast will be EP length, too.

STC: Oh yeah. {*laughs*} This is an interesting thing, too. As a tour fundraiser I have put together this limited edition package that is 15 projects all in a download bundle. It’s pretty much everything I’d done before Indie Rappers Do It For Gas Money Volume 2

came out. It’s limited to 15 copies, but because of this project I’ve had to go and listen to everything again, including my very first album, and write notes on all the stuff. Everything (in the package) comes with liner notes that are specific. Protege wrote some liner notes. Deto-22 did, too. It was an interesting experience to have to go and listen to all this stuff and remember specific things about the recording sessions. The download bundle is $50, but some people have donated more.

AB: Since that’s going to fund, at least in part, your tour, tell us what the tour is going to entail?

STC: The tour is 12 dates on the road with my homie Botzy. He’s putting out an EP balled Buck Fotzy, distributed through Fake Four, and we’re doing this The Thrill Is Gone tour. One of the first dates is with Psalm One headlining. We’re going from Chicago out to Boston, as far south as Baltimore, and then back west to Sioux Falls, South Dakota.

AB: When are we going to hear new music from you?

STC: The most recent thing I did is I collaborated with this producer from Buffalo, Cove of the Essential Vitamins crew. He had put out an instrumental project that sampled a bunch of salsa songs. The first track on it sounded great to me and I immediately recorded the song and put it out as a free download. It’s gonna be on his collaborations project that’s coming out soon. I’m trying to finish my next album, Maya. My goal is to get it out before the end of the year. I’ve made it a thing. (DJ) Mo Niklz will kill me if I don’t put it out this year.

STC: Yeah. That’s fine. I don’t care. {*laughs*} Maya is a bunch of things. The original title of the album was The Complete Collected Poems of Maya Angelou.

AB: You may have gotten sued for that.

AB: You’ve experienced some ups and downs because of music. What has been your highest high?

STC: The day an album comes out.

STC: Some of the stuff is like the Some Shit We Dubbed mixes, but the day Indie Rappers Do It For Gas Money Volume 2 came out, there was a bunch of drama associated with getting that project out that kind of sucked the wind out of it a little bit, but I remember being at Freestyle Mondays (in NYC), I was on the road with Mo Niklz, Prem Rock, and Willie Green, it was late Monday night, so the album officially had been released at midnight, and I was kind of struck by that, and kind of emotional, like finally, it’s out, I’m still an artist.

STC: Yeah, well “I’m actually still doing shit.” Sometimes you get writers block and you’ll feel like you’re never gonna write some shit again. That’s how it is for me, at least. Fran Leibowitz calls it the writer’s blockade.

AB: What’s been your worst case of writer’s block? How long have you gone without writing something good?

STC: {*laughs*} Oh God. That’s the key, is it good? In the last few years I’ve had this thing with writing where I get so really critical of shit not being good enough that it’ll not even touch the page. It’ll never leave the smallest of gestation periods. I’ll start to write and then go “that’s stupid,” but what happens is, it’s similar to what happened with me writing the tracks with The Sharing Is Caring EP

, when I do break that it’ll be a momentary burst where oh shit, that song is done, out of nowhere. I won’t have that feeling of satisfaction of having worked on something and completing it. It’ll just be something that’s done. The last few years, I’d say the last two years especially, there’s been large stretches where I wasn’t writing anything that I felt was good for music.

AB: Finally, you’ve been in a tour van with a host of interesting folks. What have been some of the more amusing experiences you’ve had while on the road?

STC: You say this, but most of the interesting folks I’ve been on the road with are Mo Niklz. I’ve spent long stretches hanging out in a Jeep with Mo Niklz. I’ve hung out with DJ Halo in a car for two weeks, as well. I don’t know, it’s hard, the things that happen on tour that are funny are usually based on the fact that you haven’t slept for like four days straight, so pretty much anything will make you laugh maniacally if it gets you in the right place.

AB: Do you remember a stupid thing that made you laugh uncontrollably?

STC: Seeing a license plate that said SWAG after Willie Green had been saying that for about six days straight. Is getting into a heated argument ten days into tour an interesting thing?

AB: What was it over? Was it over your favorite member of LFO?

STC: No. Not really. I will say that Quaker oat bars become an actual meal at some point. We had this humongous box of Granola bars on the Prem and Willie trip, I think my mother gave it to us just because she wanted us to eat, and at one point they spilled all over Willie’s shit and he claimed, “These Granola bars are fuckin up my swag.”