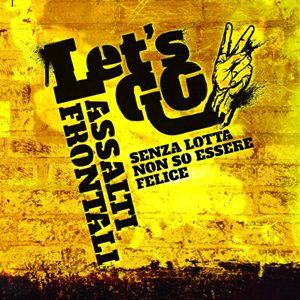 Italian hip-hop has always always been a little special. One peculiarity are its historically close ties to the centri sociali (‘social centers’), self-governed places where alternative culture and leftist politics find a home. Even the English Wiki entry acknowledges ‘Self-managed social centers in Italy‘ as ‘the heart of Italian hip hop.’

Combining the collectivism of autonomous activist groups with the strength-in-numbers philosophy of hip-hop posses, likeminded rap, ragga and punk rock enthusiasts gathered in the later 1980s in various centri sociali to define Italian hip-hop as a grassroots movement that would try to find its own path seperate from the established music industry. Neapolitan outfit 99 Posse derived its name from a center called Officina 99. Further north Rome had the Onda Rossa Posse, Bologna the Isola Posse and Milan the Lion Horse Posse, all putting out just a couple of releases under their name. Onda Rossa Posse, originating in Rome’s centro sociale Forte Prenestino and named after self-proclaimed ‘revolutionary’ radio station Onda Rossa (‘Red Wave’), soon found a new name befitting its militant mindstate – Assalti Frontali (‘Frontal Assaults’ – the name also playing on the compound ‘salto mortale,’ a risky somersault performed by trapeze artists).

“Let’s Go – Senza Lotta Non So Essere Felice” is their 2012 retrospective, consisting of a preliminary 6-track CD containing one new song and some remixes and a second CD compiling ’20 songs for 20 years of Assalti Frontali.’ 1992 saw the release of Assalti Frontali’s debut “Terra di Nessuno” (‘No Man’s Land’), according to the group the first rap longplayer in Italian, but “Senza Lotta Non So Essere Felice” (‘Without Struggle I Can’t Find Happiness’) naturally starts with “Batti il Tuo Tempo” (‘Dictate Your Own Tempo’ or ‘Fight Your Time’), the Ronda Ossa Posse track that marked an early milestone for Italian hip-hop in the summer of 1990. Borrowing the beat from Kool Moe Dee’s “I Go to Work” in its entirety, the crew (then starring several rappers, including a girl) turns the pumping drums and suspenseful synths from the lab of new jack swing mastermind Teddy Riley into a rebellious rap track. Some of the song’s statements echo the two key voices of the era’s political rap, Chuck D and KRS-One – remembering the 1989 murder of Huey P. Newton, mistrusting the media and affirming the sincerity of one’s own account, refusing to rhyme for rhyme’s sake, etc. The rhetorical question “Chi protegge noi da voi?” literally translates to the title of the Boogie Down Productions song “Who Protects Us From You?” and “Fottere il potere” is the vulgar version of Public Enemy’s “Fight the Power.”

You’d be wrong to assume that for the remainder of their career the group would continue to translate American rap. Instead there’s a personal and practical angle to many Assalti Frontali songs, an approach to conveying a message that draws upon individual examples, actual events and specific circumstances. Their last studio album “Profondo Rosso” (‘Deep Red’) for example featured songs about Mediterranean islet Lampedusa, point of arrival for many desperate boat people, or about Bruno, a wild bear in the Alps that made the fatal mistake of coming too close to civilization. Songs on “Senza Lotta…” in that vein include “Rotta Indipendente” (‘Independent Route’), dedicated to Carlo Giuliani, victim of the 2001 G8 protests in Genova, or “Il Rap di Enea,” which sides with students and teachers who went on strike against a public school reform in 2008 and is written in the name of school boy Enea.

At other times the political content is delivered from a first person perspective. On “Conflitto” (‘Conflict’) lead rapper Militant A paints himself as an individual who longs to live in peace but constantly finds himself at odds with his environment, while “Mi Sa Che Stanotte… Pt. 1” (‘I Know That Tonight… Pt. 1’) puts him in the crosshairs of undercover surveillance. There are also songs that speak directly on political phenomenons, but they too manage to join the abstract with the actual. “Baghdad 1.9.9.1.,” a collective effort featuring an array of guests, calls out Bush senior, CNN and national broadcaster Rai, as well as an Italian fighter pilot who ended up a POW during Operation Desert Storm. “Fascisti in Doppiopetto” (‘Fascists in Blazers’) and “GiÃ¹ le Lame” (‘Down With the Blades’) target the nationalist bourgeois and the violent hooligan that both make up the extreme right.

Assalti Frontali songs are often praised for their poetical expression. Certainly that can’t be true for every song up in arms about something, but Militant A’s thoughtfulness ever so often leads to reflective numbers, and they are among AF’s strongest material. Songs like “Mappe della LibertÃ ” (‘Maps of Liberty’) or “Questione d’Istinto” (‘Matter of Instinct’) transcend the group’s genre or specific background and are universal pieces dealing with human existence (something American rap still struggles with). One of the most touching items on “Senza Lotta…” is “Gaia per Davvero” (‘Gaia for Real’), a delicate farewell to a friend who left this Earth too early. Still the collection makes no bones about Assalti Frontali’s dedication to their political struggle. Even the peaceful “Gocce di Sole” (‘Sundrops’) comes to the conclusion that “really on this path there aren’t many choices – either you hit or you get hit” (“In fondo nel viaggio non c’Ã¨ molto da scegliere – o ti batti o ti fai battere”).

Assalti Frontali would not have made it to 20 without any musical progression. In retrospective the group may have followed certain American trends on the side of rock rap too closely, the influences changing from Rage Against the Machine to Whitey Ford, among others. Despite these references they usually steer clear of the simple rapping-over-rock guitars gimmick and instead come upon a European interpretation of hip-hop. The music, initially by Brutopop and since 2006 in the hands of Bonnot, often complements the lyrics – who in turn contribute to the European experience on offer here. Especially the band’s political lane is characteristic of a certain subset of the Western European left, a mixture of idealism and ideology that normally doesn’t lend itself all that well to art. But gli Assalti somehow made it work with music that is both forceful and easy on the ears. They preserved that youthful, radical renegade spirit many politcal-minded people tend to lose (a topic discussed in the closing “Avere Vent’Anni” (‘To Be Twenty’)), which puts them in a quite unique position in both popular music and hip-hop. Recent offerings like “Roma Meticcia” (‘Mixed Rome’ – a play on Roma antica, Ancient Rome) or “Sono Cool Questi Rom” (‘These Romans Are Cool’ – Euros may recognize the Asterix pun) continue to celebrate and champion an autonomous, alternative society, the kind they were fortunate to be a part of in Italy’s capital. And at age 45, Militant A isn’t showing any signs of slowing down, as evidenced by the compilation’s lead single “Let’s Go” (the English translation of the Roman ‘daje’):

“We remained human and didn’t disguise ourselves
Let’s go Forte, let’s go forever, let’s go everyone
We possess poetry in the world of the dead
We’ve turned on lights, changed fates
When I started there was silence, incense fumes
I lifted my voice, received approval
Because I described a world that changes every second
But nowadays there is so much background noise
When I hear boys rap and head towards disaster
I give them a hand
Nothing is holding me back even when it pains me
I get down to the heart, write with my left
Antifascist – of course I am
Anticapitalist â€“ goes without saying
To share it with you has been a pleasure”