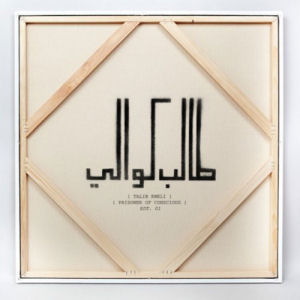 At one point in my life, Talib Kweli was my favorite rapper. That was 2004 – after catching up with all of his releases from “Black Star” to “Quality” and before I heard the first misstep of his career “The Beautiful Struggle.” Since then I’ve still had a great appreciation for Kweli and loved some of his out put (most notably “Ear Drum” and “Liberation”), but have found myself becoming less fascinated with the Brooklyn-based emcee. With his fifth solo album “Prisoner of Conscious,” Kweli is coming off of yet another career trough after two disappointing releases. (In his defense “RPM” wasn’t as bad as most initially thought, but it was still disappointing. “Gutter Rainbows” on the other hand, was probably the worst record he’s ever released.) Despite his longevity and celebrated releases, he has had quite an up-and-down career. “POC” isn’t the homerun many Kweli loyalists like myself were hoping for, and it ultimately falls flat due to repeated themes that he has touched on many times throughout his career.

“POC” is extremely unfocused, and sounds like three EPs assembled together into one album. There are the classic Kweli battle raps (a la: “Human Mic” and “Hold it Down”), the conscious raps (“Hamster Wheel” and “Delicate Flowers”) and the pandering to the commercial crowd (“Upper Echelon” and “Come Here”). This is something that Kweli has done on previous albums, but this is the first time it is overtly noticeable. Fans are likely going to blame the commercial tracks for this album’s lukewarmness, but most of these tracks work fine.

“Come Here” is your standard Kweli rapping about women cut and with Miguel’s silky smooth chorus, it’s one of the album’s better tracks. And most surprisingly, the Nelly-featured “Before He Walked” is a banger. Not all the mainstream-sounding tracks work however. The Harry Fraud-produced “Upper Echelon” is just a mess and is easily the worst song on the record.

“Prisoner of Conscious,” while not necessarily a bad record, is a pretty boring one. Kweli has exhausted most of these themes over the past 15 years, and for the first time, his album is carried by the production, which is solid but not what you would call groundbreaking. The J. Cole-laced “It Only Gets Better” is probably the best song on the album and features a perfect sound for Kweli and a great hook from Marsha Ambrosius to close out the album. The most experimental record on the album is “Favela Love” which features Brazilian singer Seu Jorge. Tracks like “Push Thru” (which features Curren$y and Kendrick Lamar) and “Rocket Ships” (which is produced by RZA and features Busta Rhymes) look better on paper than they actually sound, despite solid performances from all parties involved.

Talib Kweli is in a difficult spot in his career. Even though he still has the lyrical proficiency of his early days, he seems to be running out of fresh material. This record would undoubtedly sound much better to a person who has never listened to a Talib Kweli album before. But to many of us who have followed Kweli throughout his career, “POC” is a step above his worst material and a far cry from his glory days.