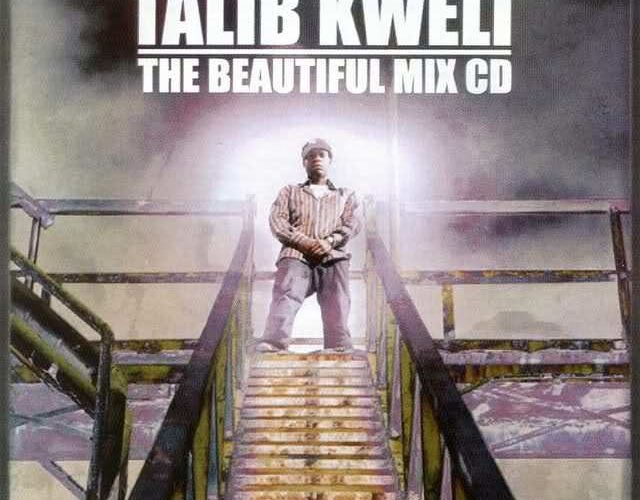 Internet piracy has claimed many victims throughout the past year, with both Jay-Z and G-Unit being forced to release their recent albums earlier than expected after the releases became widely available online. The latest rapper to suffer from this growing trend is Talib Kweli, the immensely talented MC who is held in the highest respect amongst his recording peers. His upcoming LP, “The Beautiful Struggle”, has been delayed until late summer after it had recently been leaked and spread throughout the “world wide web.”

After addressing this matter rather angrily in an online statement, Talib Kweli has decided to go the mixtape route and is self-releasing “The Beautiful Mix CD”, a 13-track collection of star-studded freestyles and newly recorded offerings. While the downloading of his album is an unfortunate event, one positive thing has happened as a result: Talib Kweli has been reanimated into a no-holds barred rhyme-spitter. Whether it only is for this release or not, Kweli has not sounded this hungry and focused in a long time. “The Beautiful Mix CD” finds our master of ceremonies putting his conscious brand of lyricism on hold in favor of harder and more ferocious verses.

The host of the festivities is Dave Chappelle in full-Rick James mode, sprinkling the tracks with everyone’s favorite word of the moment, “bitches”. After a Chappelle intro, “Move Back” officially kicks off Kweli’s show, with a minute-long verse over a bass-free backdrop setting the stage for this action-packed CD. Next up is “Buck ‘Em Down”, a freestyle session with Styles P providing his usual griminess yet being overshadowed by a sick Kweli verse. It is a testament to Kweli’s current focus that he manages to come off even harder than the always gutter Styles P. Kweli continues his rougher rhymes on “B.D.K.”, where The Game and Black Thought assist Kweli in verbally igniting Wu-Tang Clan’s “Y’all Been Warned” instrumental. While The Game and Black Thought deliver impressive bars, it’s Kweli who steals the show yet again:

“Kweli the Great, I be the first out this gate
I get cake, so stop that, you’re making a mistake
Yo, I gives a fuck if the label can’t get straight
I get paid with these mixtapes like I flip weight
Stay away from them state-paid vacations
a nigga raw like Kane when he played Jason
From the generation of crack babies and AIDS patients
I go hard, you niggas soft like Clay Aiken
Plus you’re only hard when the camera on
soft like the foundation you standing on
Rhyme marathon, sort of like when Diddy ran the city
fuck with us and them guns pop out like Janet’s titty
I got niggas always ready for the main event
that’s why I’m still around and all them corny niggas came and went
Top shotta rocking with Trotta and got the game on deck
Stroll through any fucking hood and get the same respect”

An unexpected collaboration ends up being very successful as Fabolous and his brother Paul Cain show up on “Get ‘Em”. Spitting over the classic DJ Premier percussion heard on Gang Starr’s “Take It Personal”, Fabolous actually holds his own alongside Kweli, as both MCs serve up quotable after quotable. Surprisingly, Kweli sounds completely comfortable on the same track as the flashier Fabolous, showing a versatility not seen in the past. “Wack Niggas” sports a bare-bones Kanye West production, with audio taunts being supplied by Kweli, Common, Consequence, and West himself and the outcome being quality rap music. The criminally slept-on Jean Grae (the best female MC in the game today; that’s right, I said it) rips the menacing beat of “Phoenix” to shreds, easily outshining Kweli and giving further proof that any record executive that has passed on signing her is simply playing his or herself.

Busta Rhymes forms a powerful hip-hop tag team with Kweli on “Conservations”, while Phil The Agony, Krondon, and Planet Asia of Strong Arm Steady all manage to impress on “Shame”, a blazing display of full-fledged vocal fury. Females are addressed on “Ghetto Love”, where 106 & Park’s Free provides the feminine touch over the “I Can’t Wait” instrumental used by Sleepy Brown. “Ghetto Love” is another example of how “The Beautiful Mix CD” is an exhibition of Kweli’s lyrical diversity.

“The Beautiful Mix CD” features one of the previously leaked tracks off of The Beautiful Struggle, the beautifully constructed “Lonely People”. This emotionally charged selection utilizes an effective John Lennon sample on top of an orchestral arrangement of violins and strings for Kweli to commentate on the darker sides of our society. It would be a shame if this amazing track is not included on The Beautiful Struggle, a possibility that makes getting your hands on this release very important. Just check how Kweli’s conscious mind is as sharp as ever:

“I’m heading out, about to do some fleshing out I know my flesh endowed with something to prove, I’m sitting out on a trip to Heaven’s mouth I’m stepping out in the name of love, who knew the Devil could slow dance, we have pathological romances with technological advances Infatuated with infatuation and intellectual masturbation with premature ejaculation making baby mamas go to bastardation Lonely people all through the city, they club-hopping and love shopping Thug posturing, Bloods being locking horns with Crips on them drug blocks And it’s got to flow right out of the hood when you trying to make paper out the wood You know the money don’t grow on trees, for paper people change colors like leaves”

Simply put, Talib Kweli blesses “The Beautiful Mix CD” with some of his strongest verses to date. Loyal fans of his will be delighted to hear their boy showing different facets of his abilities, while haters who dismiss Kweli as just another preachy MC should be immediately silenced after one listen. This disc is further proof that Talib Kweli is a name that should be mentioned on the same lists as current heavweights like Eminem, Nas, Jay-Z, and Jadakiss as being one of the best MCs in the rap game today. Hopefully the release of “The Beautiful Struggle” will be the big one that gains Kweli the levels of commercial respect and acceptance that he so rightfully deserves.