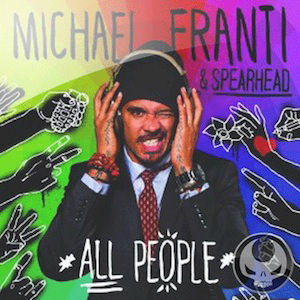 I always seem to say this when I review one of his albums, but it’s been too long since we’ve spoken of Michael Franti. He’s as much singer as rapper these days, but is honestly one of the few people other than Lauryn Hill who I believe is equally skilled at both – and enjoy either way. These days most audiences know him from his bubbly anthem to joy and relationships “Say Hey (I Love You),” but my first taste of him back in the early 1990’s was as a protest rapper who was as much spoken word poet as emcee. He has grown in his sound since then – incorporating folk music, reggae, modern rock and even the punk aesthetic into his mix. One thing that hasn’t changed is his ability to make protest music, such as tracks like “11:59:59.” The live version is a little different from the album one, but this is a good taste.

“It was 11:59, and 59 clicks
The whole world’s burning but the clock just ticks
Over, and over, every single day
Some people steal while other people pray
to God, to man, machines or whatever
Some of us just lost faith altogether
‘No way!’ They say, ‘It can’t be this way’
That’s why so many people stand up and say
One love, one blood
One heart, one soul and
One drum and only one rhythm
One tribe and all of us singing”

The reference is of course the famous Doomsday Clock which depicts how close we are to armageddon, be it through nuclear warfare or a global environmental catastrophe. And if you didn’t already know Michael Franti, you’d find out pretty quickly from “All People” that his message is (A.) as inclusive as the title suggests and (B.) as hippie and beatnik as anybody this far removed from the 1960’s can’t be. At times that leads him to sounding eerily like will.i.am, or at least what will used to sound like back when he actually had anything worth saying. Most of his peaceful vibe is just about love and good times though, such as “I’m Alive (Life Sounds Like)”:

“You be Bonnie, I’ll be yo’ Clyde
Hop into my car and drive
Like fireworks we will ignite
Through the San Francisco night
Like John, and Yoko
Like Ice-T, and Coco
Like Jay-Z, Beyonce
Call me, my fiancee
Hey soul sister, I’ll be yo’ mister
Don’t wanna be no one night stand…”

I’ve actually seen some criticism of the this crossover hit as being “too bubblegum,” which makes me wonder if those same people didn’t like “Say Hey (I Love You)” too. To me proclaiming love is a protest in itself these days, when so much of the world has been divided by religious and racial prejudice and intolerance. Franti is unpretentious about his views and his attitude – he doesn’t eschew wearing shoes to be cool or say “leather is murder” – he just does what feels right. And he’s not anti-vice or straight edge – he talks about rolling joints and drinking beer on “Long Ride Home.” I think the best word for Franti is “ebullient.” He believes in feeling good, and sharing that good feeling.

The 40 or so minutes of “All People” are what I imagine taking a shower in a waterfall on a hot summer day would be like – and if you’re too far removed from nature to do that then it’s like putting on your swim trunks and running around an open fire hydrant. You can’t mean mug or ice grill to songs like “Life Is Better With You” and “Wherever You Are.” In fact if you’re in a long distance relationship, the later song would be a good song to play for your significant other the next time you two chat online or via FaceTime. Franti is spiritual, but in that pantheistic way that says “your God and my God are all the same,” so you can never feel judged or left out listening to his music. If people think songs like “On and On” don’t have enough of his protest vibes, I beg to differ. KRS-One may have once famously said that “if negativity comes with a 22, positivity comes with a 45” but Franti’s music proves that love can be a weapon too.