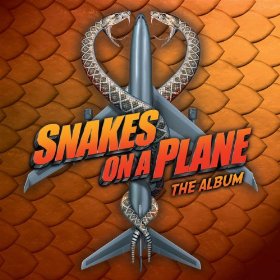 Various Artists :: Snakes on a Plane – The Album

It’s a bird. It’s a plane! No, it’s a bunch of motherfuckin SNAKES on aMOTHERFUCKIN’ PLANE! Superman can’t save your ass now. Only Samuel L. Jackson, the bad-ass who has made so many bad movies good and good movies great, can rescue a planeload full of people from one of the most unlikely of terrorist scenarios. The movie inspired a joke, the joke inspired the movie, and the whole thing became like the snake eating it’s own tail – a vicious circle. Happily the cinema watching public wasn’t eaten alive in the process – the end result was a much more pleasant mix of horror movie and campy summer comedy even critics had to begrudgingly admit worked out pretty damn well. The movie itself it is an example of pop culture taking an idea, swallowing it and then regurgitating it back out for reconsumption.

Sounds unappetizing you say? Well birds feed each other that way in nature, so it’s not necessarily as vulgar as you’d think. The producers of the film weren’t necessarily prepared for the fact it would become a phenomenon bigger than the making of the movie itself, but they weren’t so naive and stupid either that they wouldn’t embrace the phenomenon and cash in on it. At some point the lines become blurred – the fans created the line “I’ve had it with these motherfuckin snakes on this MOTHERFUCKIN PLANE” because it sounded like something Samuel Jackson would say, and he in turn liked it so much it got incorporated into the dialogue and he actually DID say it. So which came first – did the “Snakes on a Plane (Bring It)” song evolve spontaneously and then get picked up for a commercial promoting the film, or did the commercial inspire the song, or… WHO THE FUCK KNOWS OR EVEN CARES? “Snakes on a Plane – The Album” is an appropriate title, since it can’t exactly be called the soundtrack to the motion picture, but definitely goes with the film as part of the pop culture phenomenon it became. It includes the OFFICIAL theme/score as the last track, so it might as well be called the soundtrack anyway. If you do, I won’t argue with you about it.

While far from being a pure “hip-hop soundtrack” from start to finish, there’s plenty of hip-hop within it and hip-hop to it. Hip-Hop music has always been about reappropriating other elements and reconstituting them into something new, and often better, from turning turntables into instruments to turning old samples and breaks into wholly new songs and so forth. The obvious examples of hip-hop within “Snakes on a Plane – The Album” are easy enough to spot even before listening, and highly enjoyable when you do. They include the Organized Noise produced Cee-Lo Green ballad “Ophidiophoiba” (which naturally means “a fear of snakes”) to the Hi-Tek Remix of the MySpace inspired Gym Class Heroes’ song “New Friend Request.” Other examples of hip-hop influences are a little less obvious, such as the Michael Franti and Spearhead roots jamming and singing of “Hey Now Now.” At this point only listeners with a cult-like devotion or incredibly long memory know Franti for his spoken word style rapping from 1988-1994, which was a little avante garde for rap even back then. That’s not to say Franti hasn’t kept recording since leaving Capitol in 1997, but the audience has narrowed even as his musical boundaries have expanded – a damn shame really since “Hey Now Now” is comfortably kin to anything of Carribean riddim to come from the mind of the much less obscure Wyclef Jean. Most will also be able to recognize hip-hop in the beatbox and echoing sound of “Black Mamba” by The Academy Is… although they’ll wonder like Bill Clinton what the exact definition of “is” IS.

The biggest leap for hardcore rap fans though will be some of the unapologetically non-hip-hop tracks found within this snake inspired album. Are they ready for the fast BPM and singing of Armor for Sleep’s “Remember to Feel Real?” The Sounds’ “Queen of Apology” is a weird amalgamation of Spice Girls and Macy Gray that wants to go N’Sync with the beats but would be quite unlikely to crossover on the pop charts. Fall Out Boy’s “Of All the Gin Joints in All the World” is a pulsing electronic affair that suggests a touch of the Gorillaz but which is actually credited as “Tommie Sunshine’s Brooklyn Fire Remix.” Nonetheless all of the unlikely sounds of Gym Class Heroes, The Sounds and The Academy Is… all combine together on the aforementioned “Snakes on a Plane (Bring It)” and can be heard anywhere commercials for the film play. As such even the soundtrack feeds on itself like an endless Ouroboros, which is perhaps why it’s so appropriate and works so well even for not being totally hip-hop, because in the end it IS a hip-hop feel from start to end with even the non-rap tracks being a new “mix” or “remix” of some sort. If you have NOT had it with all these motherfuckin snakes yet, “Snakes on a Plane – The Album” is a dose of venom that won’t poison you but may infect you with new ideas about just what music is or what a movie soundtrack should be.