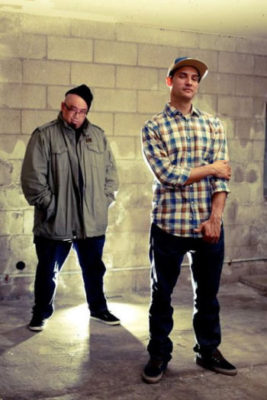 Los Angeles, California, has some great independent emcees. CookBook is one of them. A veteran of the scene, CookBook is known for his work as a member of LA Symphony, as well as being one half of Cook and Uno, and having a solo career. LA also has some great producers. DJ Rhettmatic is one of them. Also a veteran of the scene, Rhettmatic’s resume includes being a member of the Beat Junkies, and The Visionaries.

Earlier this year, CookBook and Rhettmatic joined forces, and their rebel alliance brought about an EP titled Phantom Menace

. Phantom Menace is something a little different for both artists, and RapReviews caught up with them to find out more about their teaming, and the music they ended up making together.

Adam Bernard: Before we get into the music, tell me the story of how your two met.

DJ Rhettmatic: We met through the circles, through going up the ranks in the LA hip-hop community. Him being from LA Symphony, me being from Beat Junkies and The Visionaries, it’s like one way or another we all cross paths. We all hear each other’s work. I knew of LA Symphony via Pigeon John because of 2Mex. 2Mex is also part of The Visionaries, and OMD (Of Mexican Descent), and the original Good Lifers (Good Life Cafe) Project Blowed camp. Pigeon John was (a part of) that. That’s how I know about Cook, via Pigeon John, via 2Mex.

AB: So you’ve known each other for quite a while.

CookBook: Yeah, I feel like I officially met this dude somewhere around 2000, or 2001. When you roll in the circles you don’t always hang tough, but it’s like every time you do see each other, or you’re at the same event, or you’re playing together, it’s always love, it’s always family. I think I’ve grown way closer to Rhett recently now just because of doing the project together, but we’ve always been really cool, and I’ve always had a big respect for him and what he does. He’s worked with us in the past. He did some work with me and Uno (Mas) on our record, he did some work on an LA Symphony record, and he’s produced for Pigeon, too, so it’s always been like that friendship, but also that work, too.

R: Yeah, I like that association. I know when I did scratches for LA Symphony they were working with Evidence from Dilated Peoples. It’s that six degrees of separation type of thing.

AB: When did you realize you wanted to collaborate on a project?

C: Last year I did an album and I was thinking, “What can I do this year to do something different, that I’ve never done before?” I got an idea to do a series of EPs, each one with a different producer producing the whole thing. Rhettmatic’s name was the first one to come to my mind. I approached him, I was like “Look, this is what I’m doing, and I want you to do the first one.” He was like, “Without a doubt.” The next thing I know I had a link to a folder with a bunch of dope beats and we started working.

AB: Was there anything specific you were each looking to bring out of each other?

R: Over the last couple of years I’ve been trying to branch out as a producer. I’ve always been doing production work, but I’ve been doing it within my circle, whether it be The Visionaries, or the Beat Junkies, but a lot of people know me more as a DJ and turntablist. Very few know my production work, so I wanted to branch out and do something a little different. During that time I was starting to work with different people, and Cook was one of the people who happened to reach out to me. I’ve always told people, just knowing the production I do, I do more boom bap type of beats, very drum heavy, and kind of more energetic, and dark sometimes, because that’s how I like it. Cook was cool with that. I basically said “Here’s some beats, check them out. If you feel something, cool, if you don’t, let me go back to the lab.” It wasn’t necessarily we knew what we were going to do. I let Cook do what he does, and he let me do what I do, and we’d shoot some ideas. He’d tell me the concept of a song, and I’d try to work around whatever he’s doing. If a certain beat elicits a certain type of emotions, that’s my job for that, and after he writes his lyrics and drops his vocals I’ll come back and add some more spices, and I’ll tell him I like the verse, or I don’t like the verse, or vice versa, and we try to compromise. For the most part we just try to not over-think it. Let’s just do what we feel.

AB: You mentioned that you went into this really with no expectations in terms of how it was going to turn out. Now that the EP is complete, and it is out, when you listen to the finished product, does anything about it surprise you?

C: The one expectation that I did have going into this is, (and it’s) one of the reasons that I wanted to deal with Rhett, and whichever different producers I end up working with, I’m used to rapping over my beats, I probably come with a certain style, or a certain feel over my production, and I wanted to get something that was very different from what I do so that it could draw out a different side of me. The great thing about Rhett’s production, like he was mentioning earlier, it’s hard hitting, and some of it is dark, and it really tapped into some emotions for me, and I really went in and said I’m gonna write whatever, I’m gonna let it all come out. Whatever I gotta say, I’m not gonna censor it. So when I listen to it I’m pleasantly surprised that his production genuinely drew a different side of me out. When people hear it they’re like “wow.” They say, “He woke up a sleeping giant. Where did that come from? You’re hard, aggressive, you sound hungry again.” Those are the comments that I get, and I attribute that to Rhett’s beats drawing that out of me, and that’s exactly what I wanted to accomplish by doing a project with him. That would be my pleasant surprise.

AB: Was there ever a concern that you could alienate your fan base by doing something so different?

C: Yes and no. To be honest with you, to me, you have your ups and downs in the music business. You have your frustrations. You have a lot of people who are kinda like yes men, or people that say they’re on your team, or we’re your fans, we ride with you, and a lot of it is just talk, so for me, I’m gonna say what I say, and it’s almost like drawing a line in the sand, and whoever’s with me is gonna jump on this side of the line, and whoever’s not, you’re kinda not even listening to it anyway, so who cares? So in my opinion I was like the people who rock with me are gonna rock with me, and perhaps if I draw out a different side of me I’ll reach some new people, too, and if you’re not rocking with me, you’re not, and that’s OK.

R: Coming up in this business for a long time I’ve realized you can’t please everybody. Everybody is gonna have their opinions about stuff, and at the end of the day you just gotta do you. To add to what Cook was saying, I have people that wanted me to stay with The Visionaries (style), it kind of compares to LA Symphony, because LA Symphony is kinda also known for being a Christian hip-hop group, and for some reason some people put The Visionaries in that box. Maybe one person in the group was a Christian. I think it’s only in hip-hop, I could be wrong, it could be in other genres of music, but in hip-hop fans are very particular, and for me I kinda just grew to be like you know what, if you like it, cool, if you don’t, it’s also good. Coming up as an artist you can get sensitive to that stuff, but as you get older it’s just like, this is who I am, and if you can’t accept it then hey.

AB: Why did you name the EP after one of the more questionable Star Wars films?

C: Here’s the whole story. When he sent me the beats the song that’s called “Phantom Menace

,” he named that beat “Phantom,” or “The Phantom,” and so I wrote the song, and I thought about calling it “The Phantom,” but I named it “Phantom Menace.” It’s also because I cut loose, and what we were saying earlier about how you gotta get to the point where you 100% do you and don’t worry about what other people think. I think this is the most of me doing me, and being me, as possible, so I kind of equate it to, it might be a little stretch, but the Phantom Menace

was The Emperor. He was one thing, but then he reveals who he really is, which for him was evil. I kind of equate it to that, like good, bad, or indifferent, I’m pulling that curtain back, I’m gonna pull that cloak off, and here I am.

AB: Finally, since the title of the EP is Phantom Menace

, which Star Wars character do you relate to the most?

C: I wanna say Han Solo, because he’s the coolest guy in the universe, bro. He’s like a space pirate, and he gets the chicks, but my all-time favorite character is Boba Fett. There’s something so cool about him, man.

C: You’d be an ill Yoda, giving good advice from the background like, “You do not want to write that rap, do you?” Like you’re kinda quiet, but when you do speak it’s like oh shit, Rhett got a lot to say. And that’s not a diss to your looks, bro! It has nothing to do with your looks. It has everything to do with your wisdom! We also found out Yoda knows how to scrap!

AB: Although he does live in a mossy cave.

C: That’s Rhett’s studio, it’s his cave. He just gets in there with his records and that’s it.