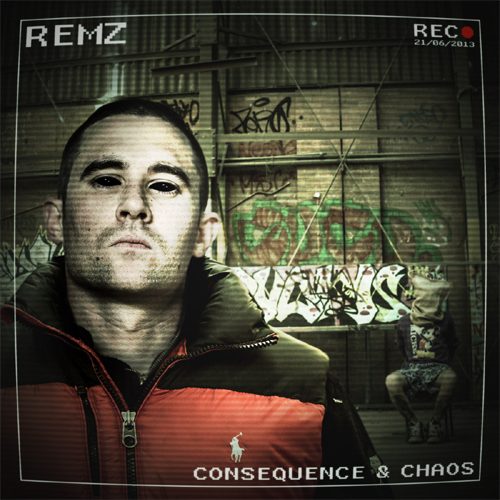 The documentary “Waiting for Sugarman” was about how much the obscure American artist Rodriguez influenced South African music. Rodriguez’s albums were bootlegged all over South Africa in the 80s, and he ended up being bigger than Elvis there despite being completely obscure in his home country. After listening to a fair amount of Australian rap, I can’t help but wonder if the same thing didn’t happen in Australia with Onyx’s “Bacdafucup.” So much of the rap I hear from the land down under seems to be directly influenced by Onyx’s rowdy classic, including Adelaide rapper Remz’s latest EP “Consequence and Chaos.”

The opener “I’m a Monster” is pure Onyx: yelled raps over hard, stripped down beats. Remz raps like a man who’s gone over the edge, comparing himself to the Mexican mafia. When Kanye claimed to be a monster, he meant he was a monster star and monster personality. Remz means it in the more literal sense, as the video for the song illustrates. You don’t need to read his bio to know that he came up in the battle scene. Every verse seems custom-designed to make opponents quiver in their Timbs.

What’s interesting about Remz is that he’s not just bragging about being a badass. He raps just as much about how screwed up he is. He comes off in his rhymes as a guy who is drowning himself in drugs and booze to cover up some serious issues. “Consequences & Chaos” describes the cycle of self-destructive behavior he’s stuck in, starting the day by drinking rotgut from a flask and going downhill from there.  “I just need a release from this evil and pain” he raps on “Let It Rain.” Remz proves that there is more to him than being rowdy and loud.

Remz’s super aggressive flow doesn’t always work as well when he tries to tone it down. He’s like a car that can only go 100 miles an hour: he’s great when he can go full throttle, but he struggles when the volume and tempo go down. He stumbles on the title track trying to adapt his aggro flow to the slower, quieter beat. I also found his accent hard to understand at times, but that’s more on me than him; I’m sure Aussie listeners will have no problem understanding Remz.

He’s better on “Let It Rain” and the creepy “That Grimey Grimey,” where he confesses “I killed a girlfriend again/Now I sleep with the skeletons.” He truly hits his stride on album closer “Last Man Standing.” He sounds truly unleashed as he brags about his ability to out drink, out drug, out rap, and outfight any rival.

Australian hip-hop almost always excels in the production department, and this EP is no exception. Fellow Gravity Ponds member Peeps produces three tracks, with Tornts and DJ Immaculate supplying the other two. The production all follows the early-90s East Coast template: hard drums with an instrumental loop to add some creepy atmosphere. The beats all hit hard, with just enough melody to keep things interesting.

“Consequence & Chaos” is a solid EP of rowdy Australian battle rap. It’s being released for free along with an  EP by fellow Gravity Ponds member Peeps on their Bandcamp page. If you like hard beats and aggro rhymes about getting fucked up and being screwed up, than “Consequence & Chaos” might be for you.