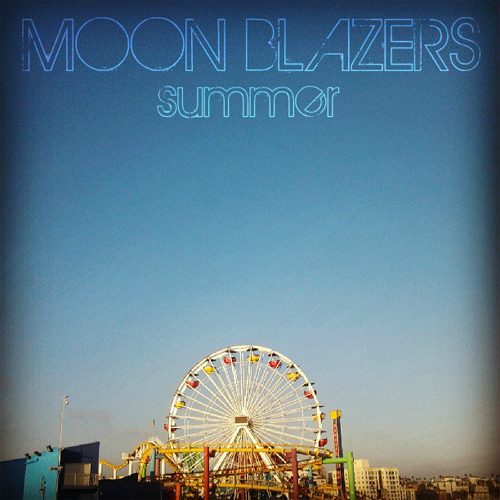 In the two years since I last heard from the Moon Blazers, their former imprint Domination Recordings appears to be vanished off the earth. That’s a shame given the talent to have gone through their roster over the years – names like Majik Most and Breez Evahflowin among others. I’ve tried the DR website but its gone tits up, and if you Google it you can only find vestiges of it in places like the Free Music Archive. I think it’s more shocking that it went out not with a bang but a whimper. That’s the state of the music industry these days.

Thankfully the Moon Blazers didn’t go down with the ship. They were quiet for a while but they’re back in a big way with “summer,” the first in a planned series of EP releases to be thematically released every three months. That’s right – for the next nine months you can expect albums like “fall” and “spring” with a chilly blast of “winter” in between. Too gimmicky? Perhaps you don’t know the Moon Blazers then. This is a rap group who once professed to have time travelled back to 1975, forced to ply their trade as traveling buskers and performers to survive, until the same temporal anomaly that sent them to the past brought them back to the present – with no explanation of why it happened either time. To say the Moon Blazers live in a world of their own imagination would be an understatement.

On the opening track of “summer” the chorus professes an incredible work ethic using an incredibly unreal word: “I’m the grindinest nigga nigga nigga you know.” Seriously – “Grindinest” – for real? Even “irregardless” seems like a real word by comparison, but the Moon Blazers make it work with sheer chutzpah. And for what it’s worth the “summer” theme does seem to fit this EP, especially on light and breezy declarations like “Travelin Man.” The opening verse may have my favorite anime reference in the last six months:

“Landing, perfectly
You heard of me, the nerd’s emcee
Cascade over tracks like toboggan
Comin from the underground like Gurren, Lagann”

That’s definitely a nerd emcee’s reference and I approve. I also approve of the playful Katrah-Quey produced “Colors Various,” a song that’s straight out of J-Swift’s bag of Pharcyde tricks. The Linus Stubbs beat for “Like Hey” is equally mellow and refreshing, and the upbeat “Betta Than Eva Remix” by Dianetics is the perfect finale for this short but highly enjoyable release. If there’s anything to complain about here it’s that five tracks just aren’t enough, and waiting three months for each installment of similar size will be frustrating at best. On the other hand if they are the quality of “summer” then the Moon Blazers will continue to be worth the wait each time.