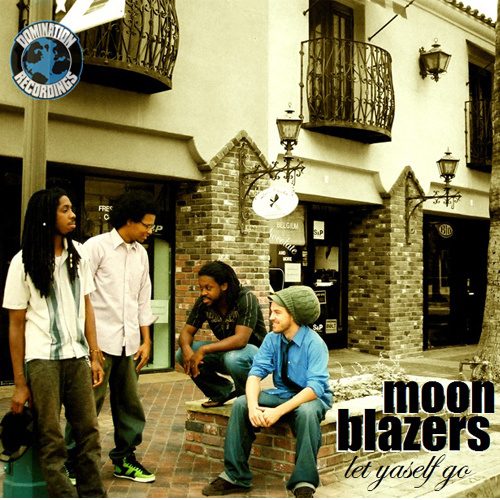 From time to time on RR I like to pull back the curtain so the reader can see what we as critics and reviewers see when labels solicit us with promo material. In that spirit I present the following blurb from the Moon Blazers, who despite several releases available on Amazon

came as a complete mystery to me when I first got this EP:

“The Moon Blazers defy the gravitational pull of mediocrity as they connect with both the deeper and higher elements of life â€“ penetrating the inner essence and ‘outer’ expression of existence. Their sound resonates with the soul and extends the mind to greater conceptual heights through uncommonly rearticulated forms of hip hop imagery. Produced by Dianetics except ‘Let Yaself Go’ by Chuchee.”

Honestly this struck me as being a little bit pretentious for a completely unknown rap group. How many people brag that their music “defies the gravitational pull of mediocrity” in a press release? Does anyone in the real world even speak that way? Nevertheless by setting such an unreasonably high standard in their press kit they did manage to pique my interest in reviewing their EP. I went into this six song release with a healthy amount of skepticism, believing that their mission would at best be a “successful failure” like Apollo 13 or at worst a disaster like Apollo 1. In either case it didn’t occur to me their escape from gravity would be anything other than fleeting. The track “Unity” set a high standard than expected though. A laid back groove of echoing guitar, softly played drums and mellow melody gave a pleasant Native Tongues vibe to the song, making me wish the unnamed rapper in the first verse had been identified in the promotional materials:

“You didn’t know I could flow on and on in the sun
like Badu, been through, different stages, been the sages
Now we Blazers, rip the pages, independent or majors
The sound still astound, we define the underground
Our crew been around, for a good minute
If you ain’t been winnin now’s the time to jump on it
like Carlton or Will – don’t like +Fresh Prince+? Daaamn!
You need to chill, stop bein so serious”

Good advice and an even better rap – I thoroughly enjoyed the intricacy with which unnamed Moon Blazer X constructed his bars, mixing up the rhymes and punchlines instead of following a traditional A to B outline. His partner Y on the following verse has a pleasantly musical flow, mostly rapping but occasionally borderline to singing, almost Domino-esque over the beat. Moon Blazer Z sums up it up nicely when he vows that the Blazers have “a deeper sense of life” and “know the language of the universe.” When they combine Z’s vow that “somehow it all fits together” doesn’t seem like hype – it has the natural ring of truth like a Dilated Peoples or Digable Planets song.

There’s not a lot to the “Let Yaself Go EP” given it’s only five songs long (out of six tracks one is an intro) but what’s here works perfectly well. “Sunshine” resurrects a familiar sample from the early days of Brand Nubian to great effect. “Fun – Recollection Pt. 2” is a bouncy piano-laden track which talks about “drinking soda pop” and “playing on the jungle gym” – an inoffensive reminiscing track which makes me want to hear “Pt. 1.” What’s surprising is that the group actually ends on a bit of a downbeat note with “Been Lonely” but it’s in perfect keeping with the mellow jazzy vibes of the rest of this free EP. Oh my bad – did I forget to mention Domination Recordings is giving this one away FOR FREE? That’s surprising given it’s more than good enough to be sold, but perhaps not so much given the Moon Blazers are still relatively unknown. I don’t think their rocket to the moon is yet assured, but based on what I’ve heard here they’re at least worthy of a test flight at high orbit – you can break the gravitional pull of mediocrity for just about 20 minutes enjoying this release.