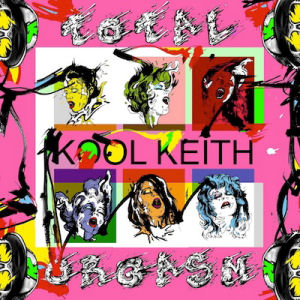 Being a fan of Kool Keith is challenging. If you tried to explain to anybody why he’s great and played them something he both produced and rapped on in the last 15 years, they’d probably stare at you like you were touched in the head. In his Dr. Octagon era there was magic in his unrepentantly scatological and sexual raps, and not just because he had better production. Keith’s unconventional and at times vulgar rhymes were a challenge to the hip-hop mainstream. He’d rather rap about smearing feces on the wall than about how big of a car he could buy and drive around in while flashing expensive jewelry. He challenged hip-hop as a whole to be unconventional and more creative.

The unfortunate truth is that in 2013, Keith Thornton is in need of the very challenge he once gave rap’s stagnant Puff Daddy mimicking mainstream. There’s no question he’s a legend in hip-hop and deserves his respect as such, even though he would probably tell you to fuck off with that shit if you tried to give it to him. He revels in being an iconoclast and not conforming to any musical or lyrical norms – and therein lies the problem. Not ALL reasons to conform to a normative value are bad. Sure it’s fun to shoot baskets at the gym all day, but if you’re hitting the rim or the backboard all the time, you might want to adjust to a standard jump shot instead of winging the ball out there wildly and praying it goes in. If you want to make a delicious chocolate cake but decide not to follow a recipe, that lumpy burnt mess you scrape out of your oven teaches you it’s not so bad to stick to the script.

“I’m looking for a bad bitch with a bald head
who sometimes wears a wig with the measles
When she shit her shit smell like pine tree car air freshener
Why you think I’m chewing Freshen Up when I fuck?
She say that’s enough – bathtub so big
we fuckin in the tub with real ducks
Catch delicious with her ass spread, I’m grand deluxe
The light bulb light blue
Watching a superbad woman on that toilet
opening her butt while she doo doo”

It’s neither shocking nor titillating, especially if you’ve been following Keith’s career for the 30 years he’s been in the music industry. “Sex Style” succeeded because he used the album to make fun of whack emcees while making crass sexual statements – and of course Kutmaster Kurt gave him the musical direction that he needed. Keith desperately needs that direction but is too stuck on himself to realize it most of the time. There’s two ways to interpret his constant refrain of “number one producer” throughout the mixtape – he either gets a laugh from people reacting to how absurd the claim is, or he genuinely believes it. I tend to think it’s the latter. “Rude & Arrogant” lives up to its name, because the track lacks all bumpability and bass, and he says things like “your pussy smell like the inside of Red Lobster.” Again it’s 2013 – that’s just not impressive any more.

Keith surrounds himself with sycophants who are clearly less talented than he is on his worst day, who are never going to challenge him to do better. With a name like Kid Middi Clazz Clown can you have any confidence in his skills going in? Give him the benefit of the doubt and you’ll regret it. Big Sche Eastwood’s verse on “Dick In Her Ass” is a lone contributor highlight, and in fact the song itself vastly exceeds the average found on this mixtape as a whole. The repugnant skits that go with songs like “Stanky Azz Pussy” can be applauded if the intent is to prove there’s no line that can’t be crossed. I’m willing to admit his lack of political correctness is impressive, knowing he’ll never apologize for lines like “you ain’t got the sense a retarded kid got – you a piss stain on my white drawers.” He undoubtedly helps us live in a world where we’re able to express even the most offensive sentiments with impunity – but I don’t sense a rebel yell in it. His music has become shtick without substance, and though I respect Keith, I’m tired of it.