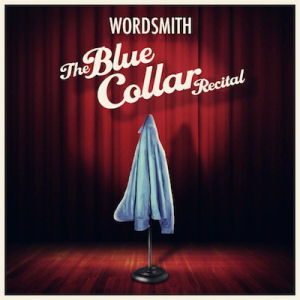 Wordsmith’s last album was a refreshingly positive rap album inspired by the birth of his son Kingston. He’s been moving further in that direction for a while now, progressively getting closer to the kind of unitarian love exhibited by rap singers like Michael Franti. “The Blue Collar Recital” is no exception to that rule. There are plenty of things in the world that anger him, frustrated him or upset him in this world, but as “When Your Faith Is Tested” illustrates, he’s even able to find meaning in senseless tragedies like the Newtown massacre:

“Put me in the shoes of the parents who had a loss
I’m a father, I’m feeling your pain, where’s the cross?
Why would the Lord afford another heartbreak?
And why would the Lord let the devil have an outbreak?
I don’t question God or look for any clues
I just know there’s 26 souls that are angels
Any faith that’s shook or even torn
We gon’ pray as a nation, better we all mourn
All need a break from dealing with deadly hate
And the lesson in your loss is gettin renewed faith
God got a way of showing there’s some humility
And testing your faith when you brace for a tragedy”

The quote should also make it obvious that (if you didn’t already know it) Wordsmith is a very Christian man, and not afraid to share his faith. He’s also cleaner than the average emcee, which means that even when he gets jerked around by a redneck “Officer Yoda” the closest he gets to cussing the cop out is “M.F.F.W.” Even being stuck in gridlock can’t keep the upbeat Wordsmith down, as he turns it into an opportunity for a little bit of “Traffic Jammin’.”

I can relate – I did the same thing when I got stuck in construction on I-65 in Indiana – I rolled the windows down and cranked the sound up. There aren’t many better ways to relieve the frustration when you are crawling along at one mile per hour. Some readers might be tempted to say “Man that dude Wordsmith is corny – he doesn’t drink, cuss, trap or ball – what kind of man is he?” Answer: a grown one. Unless you’re young enough to have your parents foot your bills or have a trust fund they left you large enough to leave you set for life, you’re not out there trapping and partying every single day. Wordsmith’s music is “Blue Collar” for that reason – this is music for the common man not living the life of Jay-Z – so “When In Doubt Give It Your Best”:

“You at the lowest in life and you lookin for the love
Welcome to that moment, so own it, so what you made of?
It doesn’t matter the situation or stimulation
Can always make a statement of peace, extend an invitation
Take a reading or pleading for you to spread the word
Send it to the hoods and home to all the suburbs”

Wordsmith’s worldview is even more impressive when given his Baltimore background – a city better known for inspiring “The Wire” than inspiring positive rap affirmations. I’m not likely to get up this early in the day myself, but “It’s 5am Smell the Roses” affirms his “itching to make a living off music” while simultaneously not being willing to trade in his core values to do so. It’s almost sad to think that it may limit the scope of his audience, since he won’t do trap music or raunchy sex anthems, but then Wordsmith is entirely at peace with himself and his life and that washes the sadness away. “The Blue Collar Recital” is yet another dose of spirituality that won’t leave you feeling like you’ve been lectured to at the end.