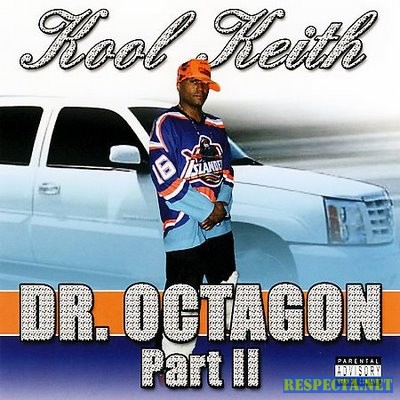 Hoodwinked. Tricked. Robbed. This reviewer was straight up gaffled. Treated like Eddie Guerrero does an unsuspecting opponent, minus the comedy. In other words Real Talk Entertainment lied, cheated, and stole. The rumors of a “Dr. Octagon” sequel had been floating around the internet for years, and even the venerable music magazine Rolling Stone got Keith’s own confirmation it was true way back in July of 2002. Needless to say copping this album at ye locale record shoppe was a no-brainer when coming face to face with it after such an arduous wait for it to finally arrive. And who would in their right mind question it’s legitimacy? After all The Pioneers.” It all seemed to be in order, and the moment for a worthy successor to the classic underground album “Dr. Octagon” had finally arrived.

Then with five words on KoolKeith.co.uk, the closest thing he has to an official site, dashed both the hopes of this reviewer and all of his fans. “The album has been bootleged.” Wait a minute – you mean this isn’t a real Kool Keith project? All this time waiting for Dr. Octagon to return just to be scammed? The list of allegations as to who did what is largely irrelevant to this review, but you can follow the link above if you want to know who did what to whom. Suffice it to say that the story is “some albums slipped through the cracks” even though it’s alleged all copies were supposed to be recalled. That’s bad news for Kool Keith. While he’s doing the right thing and stopping the con artists who robbed him of his revenue by illegally releasing an album of stolen music, recalls usually tend to drive UP demand by making an album’s notoriety skyrocket. Everyone from Body Count to the Insane Clown Posse have benefitted from the publicity. Whatever legal action Kool Keith has taken hasn’t stopped Real Talk from promoting the album on their website, and they even list a retailer that still stocks it with availability that “usually ships in 1-2 days” – meaning they either have a large stock on hand or know they can order more copies as needed. In fact AllMusic.com lists the album as part of Kool Keith’s discography, with a release date of October 12, 2004. For better or worse the album exists, got out, and can very easily be purchased.

With all that said it’s up to the consumer and/or Kool Keith fan to decide whether or not to buy this album. Even though the bootleg tracks on here are supposedly culled from several different sources, Kool Keith is such an eclectic artist by nature that a sudden change of styles or guest musicians on one of his LP’s should hardly throw anyone who knows him a curve; while anyone who doesn’t know him wouldn’t be saavy enough to smell anything wrong. The only direct hint to this reviewer that something was amiss is the inclusion of the song “New York City,” a song that appeared on his “Clayborne Family” project. Ironically said album is much harder to find than “Dr. Octagon Part II” and to this date I’ve only been able to come up with a double album vinyl printing (in a very nice looking jacket). That project was a collaboration with Marc Live and Jacky Jasper, who needless to say are not credited for their work on this pseudo-Octagon album and are even less likely to get paid for it than Keith is. A pity that, since this is one of the brightest spots of the album and Keith Thornton is in fine form over the funky and smooth Crashman beat:

“New York City’s finest, the added attraction next to your man
Popular name, I’m Mark Minus
Negative, is that the best vocals you give
I pass the structure, you think it’s okay, Motown needs to see me
Deliver your cassette, amateurs embarass me
Give me somethin to play, I sit in the big meetings with Damon Dash
Urinate on your shoulders, my delivery is arrogant
I expect cash, don’t play anything cartoon in front of Mike Biv
Ask Hyram Hicks, I put my face in the console
My engineer’s sharp, I thought you spit on hits
Oh you Spike now, wearin Allen
You sportin Houston’s kicks, Central Park West
You rhyme and practice
While I hang out with the Dominican Republic”

While on the subject of uncredited work, there are no production notes in the liner or listed anywhere else on this CD, which again would not necessarily phase a Kool Keith fan when even he uses more pseudonyms than an FBI fugitive and often goes out of his way to not credit himself for anything on his own works. Crashman only gets credit here because I was holding Clayborne Family’s album in my hand and can look at the jacket. For that reason I can also determine that “Can I Touch Ya Butt Girl?” was co-produced by all the members of said Fam, but the rest of this album is a mystery. There’s no one to praise for good beats like “The Original,” and likewise no one to blame for mediocre ones like the backdrop for “Octo Freestyle.” The latter sounds suspiciously like one of Keith’s self-produced and sometimes sadly misguided beats – electronically sterile, with a melody that repeats ad nauseum and only a bass bottom to keep things moving. It’s also a rambling incoherent rap that shows none of the form and focus of anything on Clayborne Fam’s work, let alone last year’s well received “Diesel Truckers” collaboration with Kutmasta Kurt. The lyrics tell the story:

“Defecate on your El Dorado roof, that’s hardcore
Put salve on your face for the cold sore
Same world with a cold war, wearin a facemask
What’s that disease comin over from Japan and Singapore?
Find feces on the floor, your dresser
Turn your girl to open the drawer
Rewind and do it again, the enemy, I found it
Go back and look in your car, serial shitter
Not a killer, FedEx animal waste
To the record labels I’m more iller
Adrenaline rush
8 gallons of urine packed in Dolce Gabbana bags
Under the Greyhound bus”

Used sparingly, Keith’s scatalogical references can be amusing and even at times incisive when compared to pop culture celebrities. On the “Octo Freestyle” though they are simply offered for their raw shock value and graphic visual effect, and in 2005 they aren’t that raw or shocking except perhaps to 86-year-old grandmothers in North Dakota. Keith’s obsessions with fecal matter over the years have been chalked up to his eccentricity, but the bottom line is they don’t always make good music. When he’s on point though, the song can still be a great experience even with a mediocre beat. “Stop Frontin” finds him tackling the familiar theme of frustration with a soulless and lifeless music industry, a subject he may never tire of rapping about but which he always finds creative ways to roast:

“You’re not that good on Tech
I’ma ask Sway, the Fantastic 4 every day
We know the worst rapper
If you hear the same records too much, get off the dizzicko
You got men that suck the station off
A group of men and women that pay for airplay
That hit the station off on air day
Suck the program director’s nuts
The right hand is slippery, relationship to DJ
If he’s cautious, he’ll go the other way
A West 4th Street connection
But payola baby need affection
Watch everybody in the music game
There’s an undercover lover kissin, ask Lena
You got the contract, the label not satisfied
Everybody flout, spent 9 million to go gold
Ask Benny Medina
They flop, he flop, you know they got dropped
with an option to sign again
You jackasses won’t never sing a rhyme again”

“Dr. Octagon Part II” is decidedly hit or miss. Some tracks like “Take it Off” with Nancy Des Rose are fresh as hell, and “Star Wars” has a pleasant old school Ultramagnetic M.C.’s feel to it. Other songs like “Dr. Octagon 2” and “You Know You Want It” feature Keith trying on different personalities like baseball hats, but using underproduced beats or weak lyrical styles that make them interesting to only his most hardcore fans. Some would say “well that just proves the songs are bootlegs,” but the curious thing is there are official albums like Keith’s “Spankmaster” that are in many ways weaker than this bootleg release. The widely varying quality of the beats doesn’t speak to the legitimacy of a Kool Keith album one way or another, since that’s often his trademark when he produces his own shit – and the same goes for the rhymes.

Even though this was reportedly culled from three or four different sources, including unfinished freestyles and tracks left off other projects, in the end you can’t really tell the difference between this and a real Kool Keith album. The upside of that is that Kool Keith fans will in fact be satisfied if they do choose to cop this album, because they’re used to him churning out lackluster albums between the true gems like “Lost in Space” and “Diesel Truckers.” The downside of that is that if there’s no difference quality-wise between a bootleg of your shit and the real thing, you need to step your game up. Keith is truly the most vexing MC in hip-hop – when he’s on he’s among the all-time best and when he’s off he could qualify for the all-time worst. It’s probably that very dichotomy that continues to make him a cult favorite – you never quite know what to expect. And due to his cult status among the underground and his iconic status due to his decades in hip-hop, it’s no wonder someone would go after his shit to make a bootleg album in the first place. Stamp a name like “Dr. Octagon Part II” on it and the heads will say, “Crazy-ass Kool Keith has done it again – I gotta check this shit out.” You know the score, you know what this really is, but ultimately it won’t hurt Keith’s career even if he doesn’t make a dime on it.