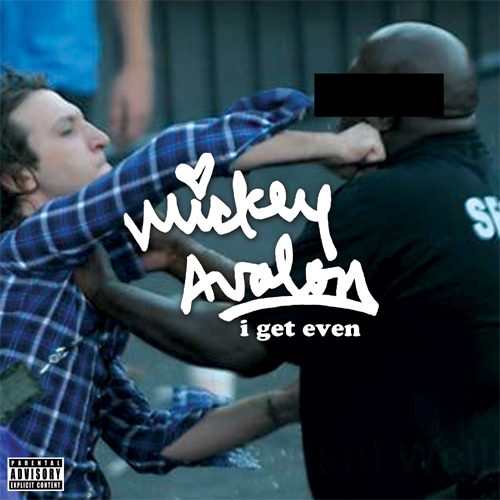 Mickey Avalon :: I Get Even

Reading the promo for Mickey Avalon’s latest EP “I Get Even” was traumatic enough, so I can only imagine what it must be like BEING Mickey Avalon. His father was a heroin addict who died in a drink-driving accident. Mickey was married, a father and moved away from his native California at a young age. He then became broke, divorced and funded his drug habit through prostitution. Then his sister died from a heroin overdose.

You’d think that this level of loss and constant life-changing moments would drive even the Dalai Lama towards a pack of razorblades, yet here we find Mickey Avalon, at 37 years of age, outright reveling in his past. Regardless of the content and backstory, “I Get Even” is surprisingly enjoyable. Clocking in at five songs long, it’s testament to Mickey’s abilities that despite being a weak emcee, there is something for everybody to enjoy here. Assuming you don’t mind a bit of filth that is.

“I Get Even” is the first track, an undeniably catchy piece of pop-rap that boasts a radio-friendly hook, but it’s clear that Mickey isn’t winning awards for his rhymes any time soon. Although seeing as 2 Chainz won a Grammy, I believe Mickey has a chance at the Pulitzer. Given the promo copy of this record didn’t feature production notes, I can’t praise/punch the producer of “Pretty Woman” , as it throws some house music in to the mix and is seriously good strip club music. The thing that makes me want to punch the producer is that I SWEAR I’ve heard this exact rhythm before in another radio chart hit. Further thieving occurs on “Hollywood” , this time from Prodigy’s “Keep It Thoro” . The fourth track, “Oh Baby” , demonstrates that when given a less invasive beat, Mickey struggles with his limited vocabulary and drowsy delivery to maintain prolonged interest. Still, the hook is catchy as ever. The one downer to this EP is “Rodeo” . Considering Mickey was genuinely a male prostitute, hearing him playfully say folk “paid to bone him” is {*cough*} hard to swallow.

Let’s be realistic, Mickey Avalon isn’t out to make classic, critically acclaimed music. He’s not ashamed of his life, and often glorifies it to the point that you’re left with an uncomfortable feeling in your stomach. Nevertheless, a full-length record would be something I’d look forward to, but also fear it may detract from what Mickey Avalon is all about. Short, filthy, good while it lasts and ultimately a cheap thrill, give Mickey a try and he just might surprise you. This time he’s not charging.

Mickey Avalon :: I Get Even
6Overall Score
Music6.5
Lyrics5