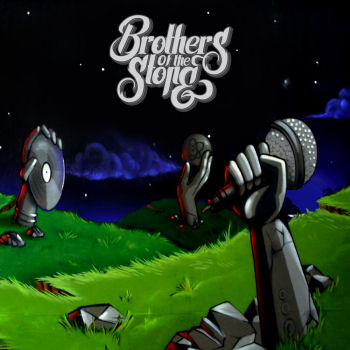 “Brothers Of The Stone are Leaf Dog, BVA and Illinformed; a Hip Hop three piece unified by a strict set of music making beliefs and principles. And weed. Lots and lots of weed.”

High Focus Records aren’t wrong on that front. Leaf Dog actually sounds like B-Real if he grew up in a British council estate. And that’s all you need to know about Brothers of the Stone, there isn’t too much reflection or time for political debate here. As fun as that sounds, it does limit the audience – but I’m no weed smoker myself and I enjoyed this record more than you’d expect. Just as Cypress Hill were dope enough (pun intended) to make any rap fan enjoy their work, the Brothers are more similar than you’d think. Perhaps not in their music – IllInformed isn’t quite as unique as Muggs and Leaf Dog is just as much influenced by Ol’ Dirty Bastard as he is B-Real, but the three have great chemistry and excel at catchy hooks and distinct deliveries.

You can really hear ODB in Leaf Dog’s delivery on “They See You”, a superbly produced track that showcases IllInformed at his best. “Take Control” sees BVA and Leaf Dog nail their hook, but it’s the horns and vocal squeals on the beat that sound so refined (like a lot of the album does) – it’s no surprise these guys have acquired some highly respected guests. “Go Hate” is a more mundane affair, thematically at least, but the Leaf Dog hook is infectious and despite Reef the Lost Cauze’s presence, the Brothers make the song their own. “Cartoon Days” is a stoner’s tale of hallucination that is essentially average hip hop until Jack Jetson throws out some Dexters Lab references with a relentless, lyrical display reminiscent of early Jehst. The vocabulary is truly top notch.

The rapper that refuses to retire – KRS-One – dominates proceedings on “Future” atop a surprisingly punchy beat, although the much-hyped underground emcee Beast 1333 doesn’t really add much to the song. The award for Most Inaccurate Song Name goes to “Meditation”, a filthy production evoking visions of deserts and scorching sunlight, snake charmers and more. OK, that’s perhaps perfectly suited, but it is not likely to help any aspiring Buddhists reach Nirvana, especially with Vinnie Paz rapping about ratchets (it’s almost as if Vinnie recorded a verse for the wrong song, but then it sounds like any old Vinnie Paz verse). Despite this, it is still a raw concoction with a particularly potent beat from IllInformed that will have listeners preparing for medication. “Both Wicks” is musically more intense, but is equally bogged down in its appreciation of cannabis, opting for carelessness and disregard as themes.

There are times when IllInformed’s production is too safe, such as on “Wisdom” which has a good enough beat, but you feel the style of production takes away from the distinct, almost quirky rhymes of Leaf and BVA. Just as RZA’s grimy, sinister sounds suited the crazed ODB, more beats along the lines of “Underground”‘s simplicity wouldn’t have gone amiss. Whilst rough around the edges, “Brothers of the Stone” does see the Brothers possessing the rare ability to merge with the beat, the sort of flow that’s effortless, which when combined with IllInformed’s polished production does help hide the shortcomings. The heavy emphasis on weed can get off-putting and this is nowhere near the standard of stoner rap’s finest records, instead leaning more towards standard British hip hop, with lots of weed talk. Leaf Dog is clearly a unique artist with incredible potential, but this project lacks focus despite containing some moments of excellence.