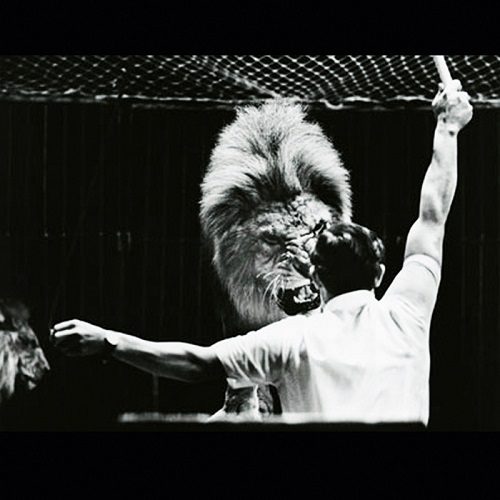 Odd couples are so often great combinations in hip hop. To put the oddness in to perspective, Sonnyjim is an emcee from Birmingham (England), who has a relentless, effortless style of rhyming and often posts photos on his Facebook of himself eating at expensive restaurants or what car he has just bought. On the contrary, Leaf Dog is an artist best known for his unique, toothless appearance and squeaky vocal tone that saw him storm through the underground scene with frequent collaborator (and fellow Brother of the Stone) BVA. He’s scruffy and unpredictable, much the opposite to the calm and collected Sonnyjim. Where both artists cross each other on the verbal Venn diagram is through their infatuation with cannabis. They are both self-professed stoners, and it’s clearly evident in their laid back approach to “How to Tame Lions”, a smooth collaborative album with Sonnyjim spitting and Leaf Dog providing the beats.

I knew all about Leaf Dog’s skills from his LP “From a Scarecrow’s Perspective”, his work with the 3 Amigos and Four Owls, and his relentless touring across the UK. He seems to be on every flyer for a hip hop show, and that’s just in Bristol. He was also a part of the aforementioned Brothers of the Stone project last year alongside BVA and Illinformed. What I wasn’t aware of was how great a producer he is. He’s providing some memorable tracks for Sonnyjim on this brief 9-track album, all suitably laid-back yet catchy enough not to become tedious. “Royal Flush” kicks off proceedings and shows a bit of Roc Marciano sneaking in to Sonnyjim’s style, with a reliance on simile and vivid extravagance. I referred to “the Top Gun from Brum” as a one-liner emcee firing off rhyme after rhyme, and it’s still an accurate summary of Sonny (and Marciano) in that you’re gripped by each line, eagerly awaiting the next.

That’s not to say Sonny is quite at Roc’s level, but the slower sounds from Leaf Dog do lend this record some class to the smug braggadocio on display. In case you wanted to hear a livelier version of “Royal Flush”, respected remix-er Apatight provides a thunderous piano-led instrumental at the end of the album that will have you slamming your neck back and forth uncontrollably. It’s a shame that Apatight’s beat overshadows the rhymes though; Sonny gets kicked to the side for this one.

Fortunately, Leaf Dog switches up the usual chopped, stop-start beats Sonnyjim usually chooses to spit to. “Diablo” is like a British version of something Roc Marciano would make, with random name drops in his verse including Dolph Lundgren and Tarantino, along with dialogue from various movies. It’s well executed but rather unimaginative. The use of dialogue is a facet of nearly every song, which was what ruined the latest Canibus album (makes a change from the beats I suppose). Thankfully, the production is largely on-point throughout, whether it’s the plodding “Running Water” or reflective “Lions & Martyrs”, Leaf Dog does his thing. Even the surprisingly low key appearance from Stig of the Dump on “Briefcase of Fun” isn’t the jarring punch in the face you’d expect. What we’re left with is about 20 minutes of solid rapping, with the only hook being the scratched one on “Briefcase of Fun”. It doesn’t necessarily get boring because it finishes before it’s really got started, but it showcases some unexpected chemistry between Sonny and Leaf Dog, particularly the tracks “Royal Flush”, “Running Water” and “Astalavista”.

Sonnyjim has certainly calmed down since his breakthrough record “Trading Standards” caused a stir back in 2008. Where that mixtape (or mix CD) was jam-packed with stories any regular Joe (or Jim) could relate to, and collaborations with nearly everybody who was killing it on the mic seven years ago; “How to Tame Lions” is very much a record that is calmer and more focussed, either due to Sonny’s maturation or his over-appreciation for the kush. Unfortunately, it’s less memorable lyrically as Sonny has lost some of his unpredictability, even telling listeners not to ask him to write concepts any more on “Astalavista”. It’s a shame, because as good a boaster as he is, Sonny excels when taking the listener somewhere, whether it be through his fine dining, references to mundane household items or tearing a beat apart with a fiery, passionate barrage of words. He’s certainly grown in the last seven years, but his slower style has lost some of the reasons why so many eyes (and ears) were on him in the first place.