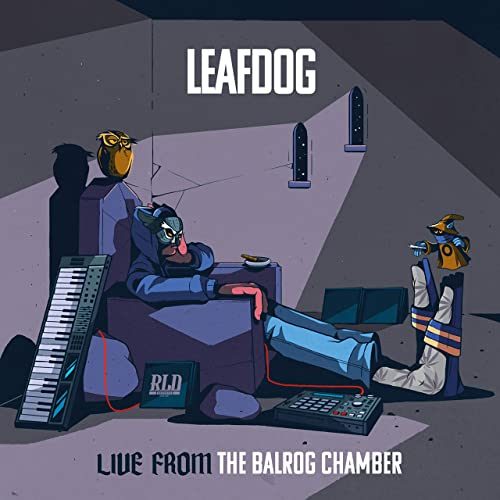 Live From the Balrog Chamber

Previously in 2020, The Owls (a/k/a The Four Owls) released their third album “Nocturnal Instinct.” It was the most clear attempt yet for the British rap super group to reach a new audience stateside, with features from R.A. the Rugged Man, Kool G. Rap and DJ Premier among others. You couldn’t get more “hardcore underground” than that lineup, and yet I didn’t really hear a word about it. Truthfully we didn’t even cover it. Perhaps the album was just a victim of bad timing, dropping as it did on April 17th, when everyone was busy trying to figure out if they should wear a mask or not and how far to stand away from other people in line at the grocery store.

“Live from the Balrog Chamber” features Leaf Dog, one-fourth of that aforementioned all star team, and much like the group album there are some very clear overtures to U.S. listeners here. One example is embedded above — “What You Don’t Know” featuring Grand Puba. It features the sort of mellow jazz piano and bass you’d expect to hear Puba Maxwell do for a reunion with Brand New Heavies, with his typically playful boasting raps: “See I was born with a mic/and that’s the real reason my flows so tight!” It would be easy for Leaf Dog to be overshadowed by his charisma, but the UK emcee steps up to the challenge with gusto: “Poised karma/spitting acid that destroys armor/trying to keep the beef quiet like a wee farmer.” As hype as that is his duet with The Last Emperor had me MORE hyped.

Leaf Dog is playing to my biases on several levels here. He drops a sly reference to Emperor’s “Secret Wars” in the chorus, while the song’s title itself refers to the most influential Terry Gilliam film of my childhood. I’m not here to argue it was the BEST Gilliam movie, but an accident of being the first movie I ever taped on a VCR, only to have my parents accidentally tape OVER said same left me wondering for over a decade if what I had seen was real. Watching “The Wizard” starring David Rappaport on CBS as a kid only made the mystery deeper, because I KNEW he was the same actor “from that weird British sci-fi movie with James Bond.” (It probably helps you to know we didn’t have the internet in the 1980’s to connect the dots.) Hearing Leaf describe himself and Emperor as “Two Time Lords, only fighting for the right cause” made my inner Whovian smile with joy.

As albums on either side of the Atlantic go these days “Live from the Balrog Chamber” is quite meaty, giving Leaf Dog a full eighteen tracks to chew on. The only mystery for me reviewing it is which one track was “produced by Fel Sweetenberg” since that’s the only liner note of any kind that I’ve got. Leaf self-produced the rest of this release, which means one of the two of them deserves some big props for “Tryna Keep,” a hardcore head nodding track which includes a cameo from Boston legend Edo.G. Even at only 2:22 the song packs plenty of punch, making me secretly yearn for a remix to extend it out. “Edo and Leaf Dog got souls that are kindred.”

In fact as much as I enjoy Leaf Dog’s distinctive chunky UK accent on the mic, his knack for beats is clearly a driver for this album’s dopeness. Take a dart and throw it at the board for the one song Fel did, because if Leaf was the one instead, it’s a bullseye for the other 17 songs. The interplay of orchestral samples and DJ Premier style scratches on “Legend” featuring Havoc (RIP Prodigy), the very Stoupe the Enemy of Mankind like “Rhyme Chemist” featuring Cella Dwellas (where have they been?), the pleasant bass and softly strummed guitar of “Never Thought” and what I’d swear was a Madlib track for Freddie Gibbs on “Take a Second” all hit the mark dead on.

I know the typical “MURICA” yank is going to turn their nose up at listening to an English artist save for the one who voices Garnet on Steven Universe. Big mistake. BIG BIG MISTAKE. If Leaf Dog was born on the East coast, he’d draw comparisons to Your Old Droog. If he was born on the West coast, he’d draw comparisons to Del the Funky Homosapien. He’s got the punchlines, the delivery, the pop culture and science fiction references, and the natural swagger of any American rapper. If you slept on The Owls because you weren’t interested in a British super group even with superb guest stars, Leaf Dog’s “Live from the Balrog Chamber” will change your opinion.